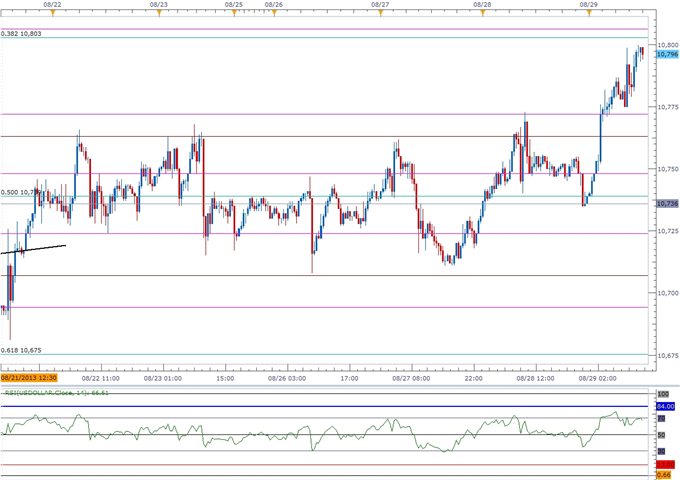 The Dow Jones-FXCM U.S. Dollar Index broke out of the bearish trend carried over from the previous month amid the positive developments coming out of the U.S. economy.

The Dow Jones-FXCM U.S. Dollar Index (Ticker: USDollar) climbed to a fresh monthly high of 10,799 as the preliminary 2Q GDP report highlighted a stronger recovery in the U.S. economy, and the bullish sentiment surrounding the reserve currency should gather pace ahead of the next Fed policy meeting on September 17-18 as the outlook for growth and inflation improves.

The near-term outlook for the greenback remains very constructive as the index continues to carve a series of higher highs paired with higher lows, but the dollar may face a small correction going into the final trading day of August as the 30-minute relative strength index falls back from overbought territory. Nevertheless, we may see a limited downside move in the USDOLLAR as we anticipate former resistance around the 61.8 percent Fibonacci retracement (10,764) to now act as support, and we will look for opportunities to buy dips in the greenback amid the growing arguments for the FOMC to taper its asset-purchase program. 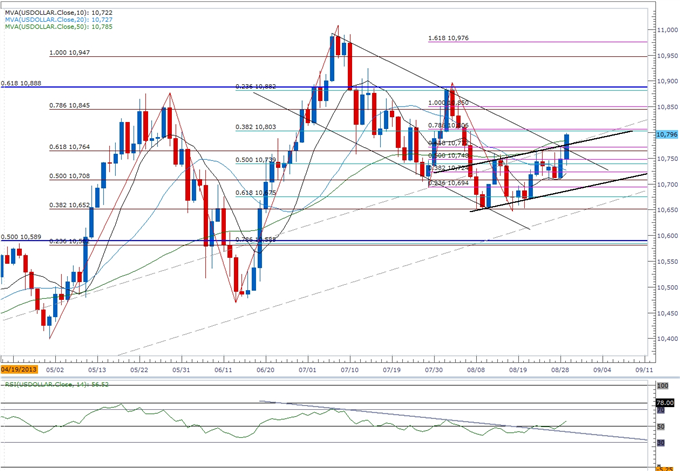 The dollar should continue to retrace the decline from the previous month as it breaks out of the downward trending channel, and the USD may ultimately carve a fresh 2013 high (higher high) next month as the Fed looks to move away from its easing cycle.

Market participants are looking at two possible scenarios for the FOMC, with the committee either maintaining its current policy or scaling back on quantitative easing, but Chairman Ben Bernanke may continue to take a unorthodox approach as the central bank prepares to switch gears in the coming months. Indeed, the Fed may resort to laying out a more detailed exit strategy rather than shifting its policy stance, but even such a scenario may heighten the bullish sentiment surrounding the dollar as the Fed prepares to change course. 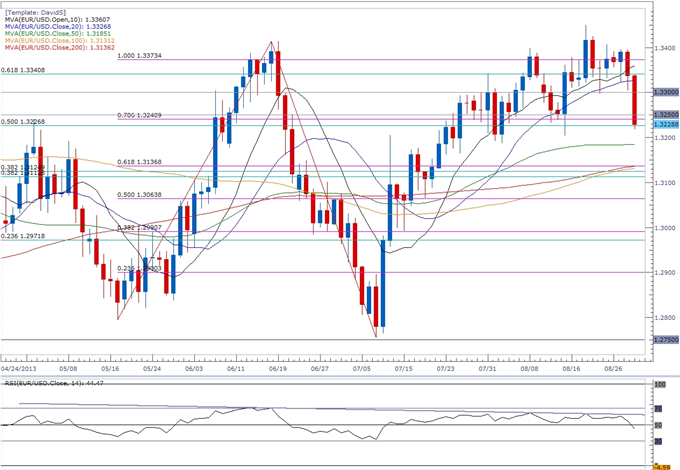 Once again the greenback rallied across the board, driven by a 0.82 percent decline in the Euro, and the EURUSD may continue to give back the rebound from July (1.2754) as the pair carves a top in August.

The bearish divergence in the relative strength index continues to highlight a bearish outlook for the single currency, but the EURUSD may face range-bound prices ahead of the European Central Bank (ECB) interest rate decision on September 5 as the euro-area returns to growth.

In turn, there’s speculation that a more upbeat ECB will prop up the single currency over the near-term, but central bank President Mario Draghi may sound more dovish this time around amid the growing risk for deflation.