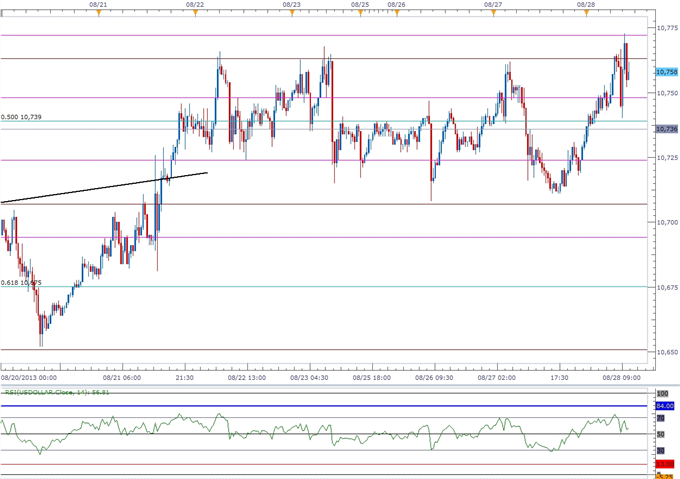 Is the USD Correction Finally Over? Key Figures to Watch

TheDow Jones-FXCM U.S. Dollar Index is falling back from a fresh monthly high of 10,773, but we favor buying dips in the greenback as it looks poised for a breakout.

The Dow Jones-FXCM U.S. Dollar Index (Ticker: USDollar) is paring the advance to 10,773 as U.S. Pending Home Sales decline for the second month in July, but the near-term outlook for the reserve currency looks very constructive as it continues to carve a series of higher highs paired with higher lows.

The dollar may face a small correction during the North American trade as the 30-minute Relative Strength Index falls back from overbought territory, and we may see a move back towards the 50.0 percent Fibonacci retracement around 10,739 as it appears to be providing intraday support. Nevertheless, we will look for opportunities to buy the reserve currency as it looks poised to breakout of the range-bound price action carried over from the previous week, and the bullish sentiment surrounding the greenback may gather pace going into September as the Federal Reserve anticipates to see a stronger recovery over the remainder of the year. 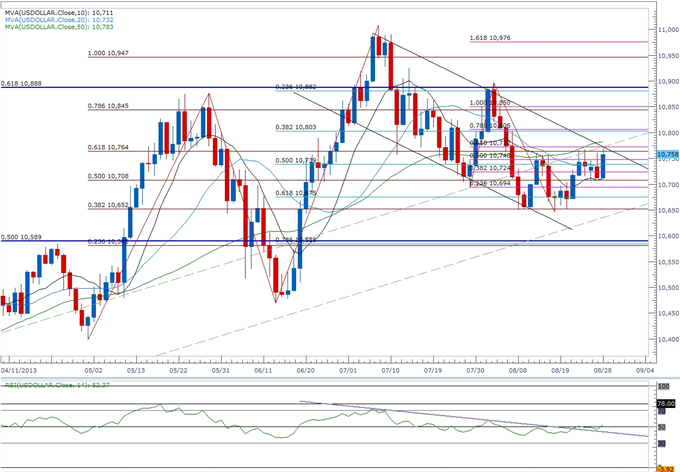 Given the breakout in the relative strength index, it looks as though it will only be a matter of time before the USDOLLAR clears the downward trend carried over from July, and the greenback may mark a higher high in September as it carves a higher low around the 38.2 percent retracement around 10,652.

Looking ahead to the data on tap for the remainder of the week, the preliminary 2Q GDP report may generate a potential break in the greenback as its expected to show an upward revision in the growth rate, and we may see a growing number of Fed officials look to taper the asset-purchase program at the September 17-18 meeting as the outlook for growth and inflation improves. 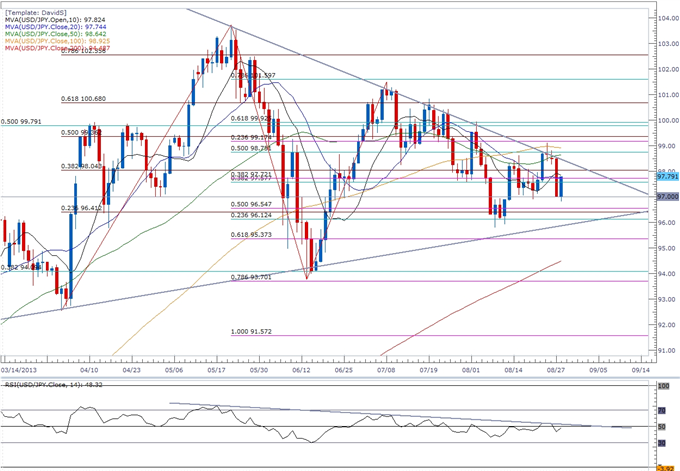 The greenback rallied across the board, led by a 0.78 percent decline in the Japanese Yen, and it seems as though the same story will apply to the USDJPY as the pair appears to be coiling up for a move higher.

Indeed, we will be keeping a close eye on the RSI as the oscillator comes up against trendline resistance, and a move higher should open the door for a more meaningful rebound in the USDJPY as we anticipate a continuation of the longer-term trend. As Bank of Japan (BoJ) officials look to further embark on their easing cycle, the deviation in the policy outlook continues to favor a bullish outlook on a longer-term timeframe, and Yen remains poised to face additional headwinds as the new government struggles to draw up a credible plan to address the ballooning deficit.