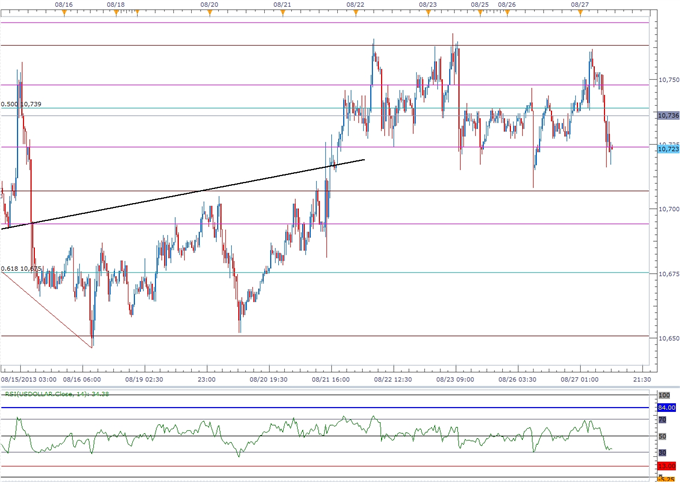 USD Coiling Up Amid Month-End Flows, Waiting to Sell JPY

TheDow Jones-FXCM U.S. Dollar Index failed to benefit from the positive data coming out of the U.S. economy, while the Japanese Yen is gaining ground across the board.

The Dow Jones-FXCM U.S. Dollar Index (Ticker: USDollar) gave back the overnight advance to 10,762 despite the slew of positive developments coming out of the U.S. economy, and month-end flows may keep the greenback range-bound during the final days of August as market participants weigh the outlook for monetary policy.

The dollar should continue to carve a near-term base above the 50.0 percent Fibonacci expansion (10,708) as the Federal Reserve looks to move away from its easing cycle, and we may see a short-term rebound over the next 24-hours of trading as the 30-minute relative strength index holds above oversold territory. In turn, we will maintain our game plan of buying dips in the greenback, and the bullish sentiment surrounding the reserve currency looks poised to gather pace as the FOMC stands ready to switch gears later this year. 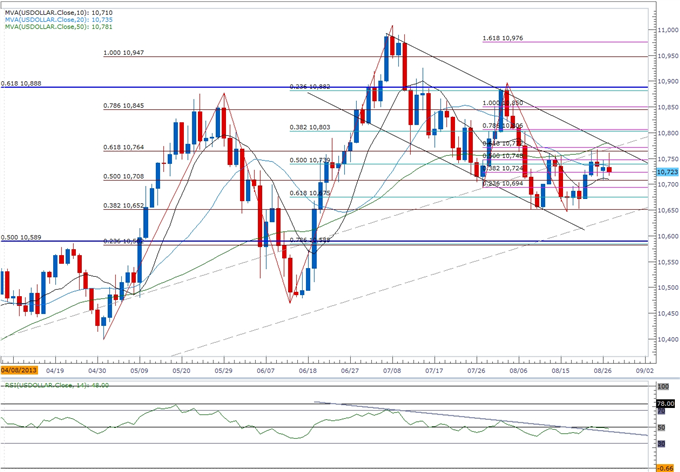 With the ongoing discussion at the FOMC to taper the asset-purchase program, San Francisco Fed President John Williams warned about the challenges in normalizing monetary policy, and went onto say that central bank policy will continue to be stimulate even after the committee halts its quantitative easing program.

Indeed, there appears to be greater consensus amongst Fed officials to slowly move away from the easing cycle, and the dollar should continue to carve a series of higher highs paired with higher lows amid the shift in the policy outlook. The USDOLLAR looks to be coiling up for a move higher as the relative strength index breaks out of the downward trend, and may make another run at the 11,000 handle as the FOMC scales back its willingness to expand the balance sheet further. 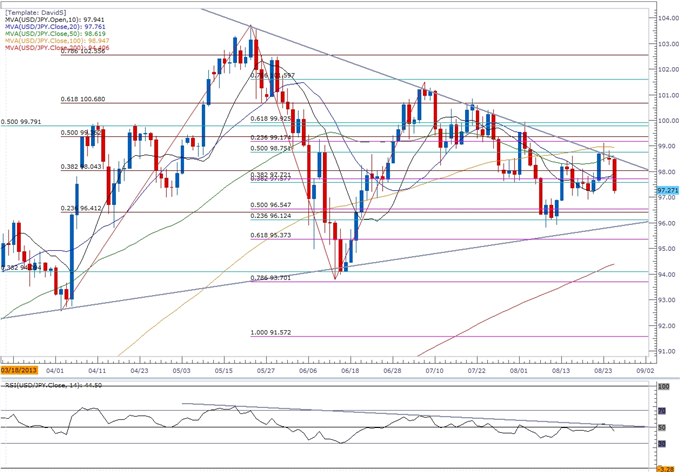 Two of the four components rallied against the dollar, led by a 1.22 percent advance in the Japanese Yen, and the low-yielding currency may continue to strengthen against its major counterparts as market sentiment falters.

Despite the uncertainties surrounding the fiscal outlook, it seems as though the new government is confident that the economy will be able to weather the first sales-tax hike in 15-years, and the Yen may track higher going into September as Japanese policy makers turn increasingly upbeat towards the economy.

Nevertheless, as the USDJPY continues to trade within the wedge/triangle formation, we should see a resumption of the bullish trend from earlier this year, and the near-term correction may offer a buying opportunity as the pair appears to have carved a higher low in August.