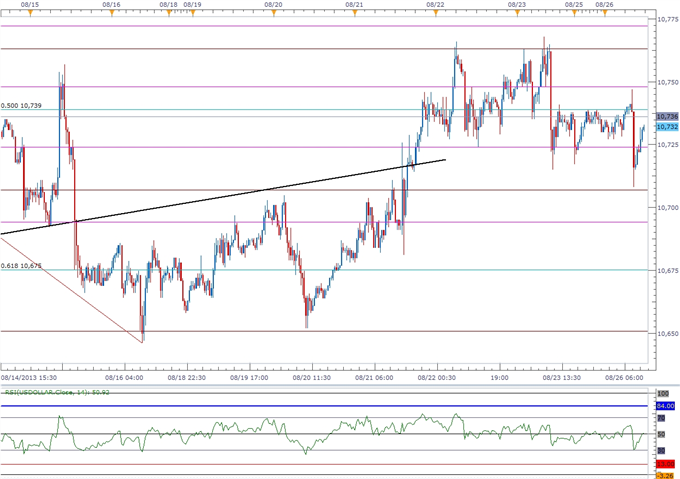 The Dow Jones-FXCM U.S. Dollar Index is firming up during the North American trade, while the Australian dollar continues to outperforming against its major counterparts.

The Dow Jones-FXCM U.S. Dollar Index (Ticker: USDollar) tagged a low of 10,709 following the marked decline in U.S. Durable Goods Orders, but the rebound in the reserve currency may gather pace during the final days of August as it carves out a higher low ahead of September.

Indeed, the rebound off of the 50.0 percent Fibonacci expansion (10,708) looks poised to gather pace as the Dallas Fed Manufacturing Activity survey tops market forecast, and we may see another run at 61.8 expansion around 10,722 should we see a growing number of central bank officials adopt an improved outlook for the U.S. economy. As the USDOLLAR appears to be coiling up for a move higher, we will continue to look for opportunities to buy dips in the greenback, and the bullish sentiment surrounding the reserve currency may gather pace going into September amid the growing discussion at the Federal Reserve to taper the asset-purchase program. 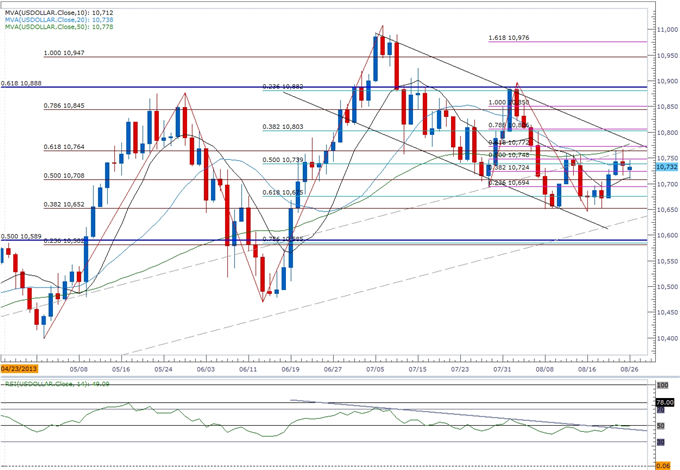 The pronounced decline in demands for large-ticket items have certainly dampened the outlook for 3Q GDP, but we should see the Fed slowly move away from its easing cycle over the near to medium-term as the central bank continues to call for a stronger recovery in the second-half of the year.

Despite the extraordinary measures taken by the FOMC, Minneapolis Fed President Narayana Kocherlakota argued that the committee has ‘not been able to lower rates’ as much as they intended, and the rise in U.S. yields may limit the central bank’s scope to implement a large change to its asset-purchase program as the committee looks to encourage a stronger recovery.

Nevertheless, the USDOLLAR may ultimately threaten the bearish trend ahead of the September 17-18 meeting amid the topside break in the relative strength index, and the technical outlook continues to favor a stronger dollar as the Fed scales back its dovish outlook for monetary policy. 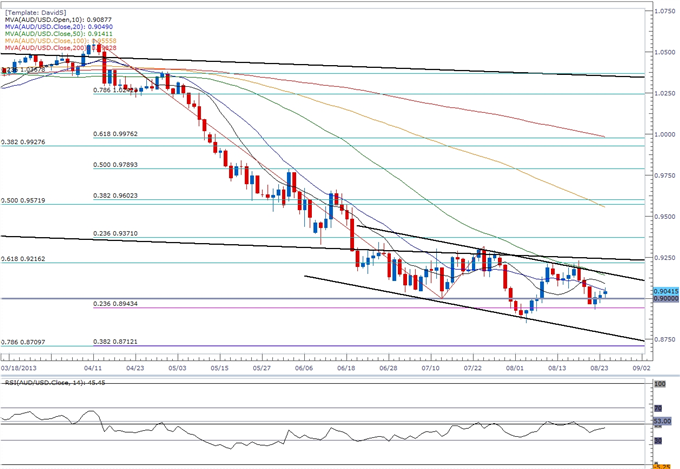 Three of the four components advanced against the greenback, led by a 0.18 percent rally in the Australian dollar, but we like selling rallies in the AUDUSD as the downward trending channel dating back to June continues to take shape.

The AUDUSD looks poised to give back the rebound from earlier this month (0.8846) as it carves a lower high in August, and the negative slope across the moving averages reinforce a bearish outlook for the pair as the Reserve Bank of Australia (RBA) keeps the door open to further embark on its easing cycle. In turn, the near-term bounce in the AUDUSD is likely to be short-lived, and we may see a move towards the 0.8700-10 region as market participants retain bets for another rate cut.