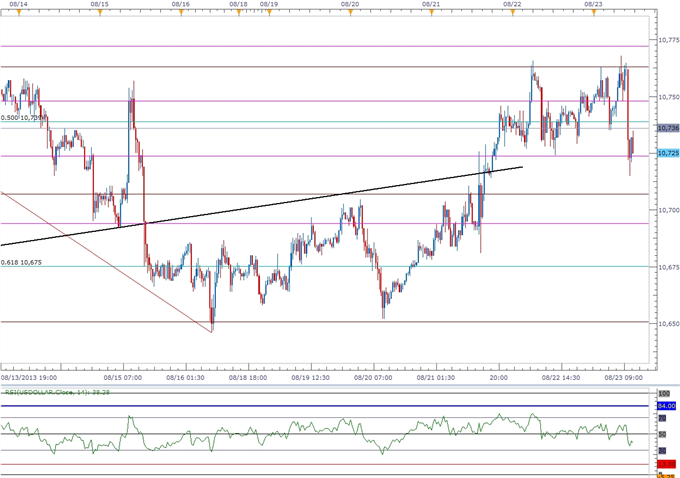 TheDow Jones-FXCM U.S. Dollar Index is struggling to hold its ground amid the marked decline in U.S. New Home Sales, while Cable lags behind its major counterparts.

The Dow Jones-FXCM U.S. Dollar Index (Ticker: USDollar) tagged a low of 10,715 as U.S. New Home Sales marked the biggest decline since May 2010, but the greenback may regain its footing going into the Fed Symposium in Jackson Hole, Wyoming amid the growing discussion at the central bank to taper the asset-purchase program.

The dismal data print triggered a short-term correction in the greenback following the rebound off of the 10,650 region, and the dollar may firm up throughout the North American session as the 30-minute relative strength index appears to be turning around ahead of oversold territory. In turn, the reserve currency should continue to carve a series of higher highs paired with higher lows as we head into the final days of August, and the bullish sentiment surrounding the greenback may gather pace ahead of the next policy meeting on September 17-18 as the Federal Open Market Committee (FOMC) appears to be slowly moving away from its easing cycle. 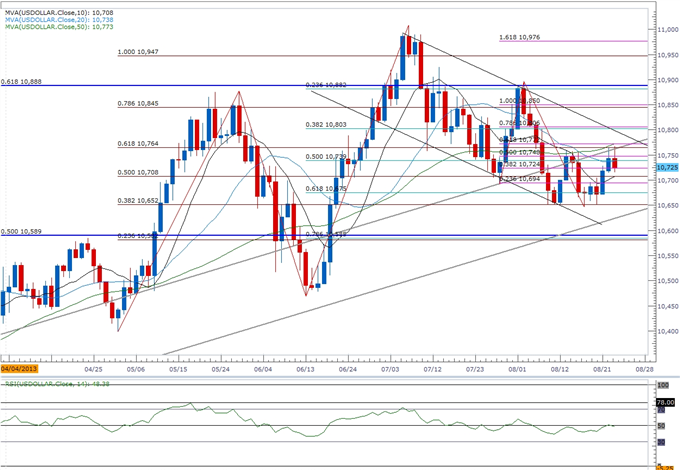 With a higher low (10,650) in place, the shift in the policy outlook favors the topside targets for the USDOLLAR, and the fresh batch of central bank rhetoric coming out of the Jackson Hole conference may encourage a more meaningful rebound in the dollar amid growing speculation that the Fed will scale back on quantitative easing next month.

Although St. Louis Fed President James Bullard, a voting member on the FOMC, continued to voice his support for the $85B in asset-purchases, Atlanta Fed President Dennis Lockhart sounded in favor of tapering QE in September, and we may see a growing number of central bank officials scale back their willingness to expand the balance sheet further as the economic recovery gradually gathers pace. In turn, the USDOLLAR looks poised to threaten the bearish trend carried over from the previous month, and we will look for opportunities to buy dips in the greenback as the Fed looks to change course. 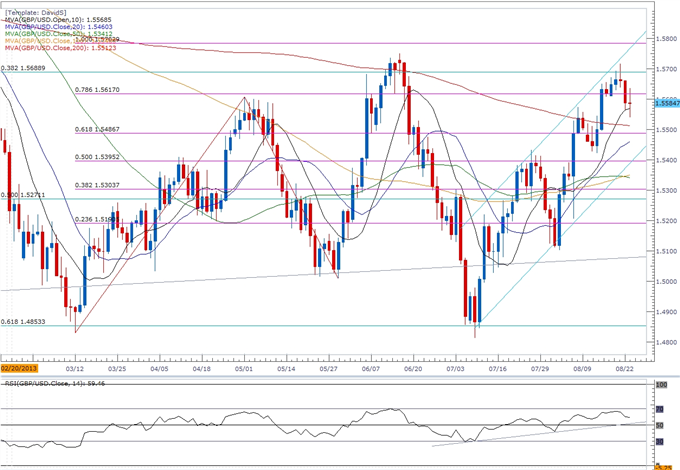 Three of the four components rallied against the greenback, led by a 0.34 percent advance in the Australian dollar, while the British Pound bucked the trend even as the preliminary 2Q U.K. GDP report showed economic activity increases 0.7 percent amid an initial forecasts for a 0.6 percent print.

Despite the positive data coming out of the U.K., there’s speculation that the Bank of England (BoE) will keep the door open to expand the balance sheet further in order to press down on U.K. yields, and we may see a larger correction in the GBPUSD as it continues to search for support. Should the upward trending channel give way, we will look for a mean-reversion trade in the British Pound, and the pair may ultimately give back the rebound from July (1.4812) as the policy outlook remains clouded with high uncertainty.