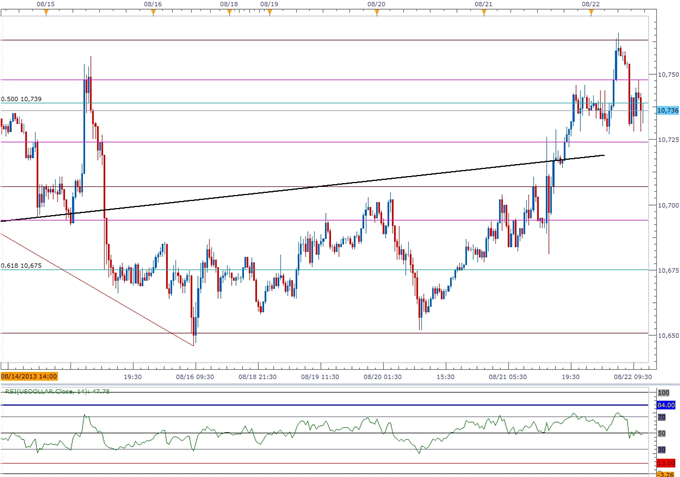 TheDow Jones-FXCM U.S. Dollar Index extended the rebound from earlier this week on the back of the FOMC Minutes, while the Australian dollar bucks the trend.

The Dow Jones-FXCM U.S. Dollar Index (Ticker: USDollar) rallied to a fresh weekly high (10,766) on the back of the Federal Open Market Committee (FOMC) Minutes, and the reserve currency should continue to retrace the decline from the previous month as the central bank shows a greater willingness to taper the asset-purchase program at the September 17-18 meeting.

Indeed, it seems as though a growing number of Fed officials are becoming more upbeat on the economy as the committee continues to call for a stronger recovery in the second-half of the year, and the shift in the policy outlook should drive the greenback higher over the near to medium-term as the central bank slowly moves away from its easing cycle. As a result, we will implement a ‘buy the dip’ strategy going into the Fed Symposium in Jackson Hole, Wyoming, and the short-term pullback may offer a buying opportunity as the index appears to be carving a higher low above the 38.2 percent Fibonacci expansion around 10,724. 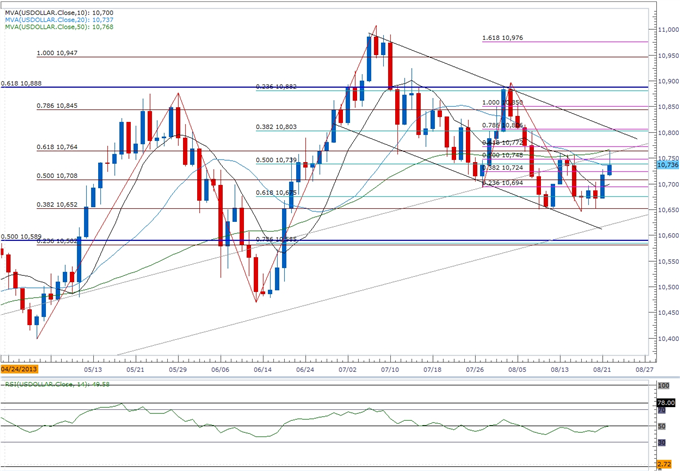 The pullback from the 61.8 percent expansion (10,764) is likely to be short-lived as the USDOLLAR carves a higher low in August, and we may see the greenback regain its footing following the European close as Dallas Fed President Richard Fisher, who will join the FOMC in 2014, is scheduled to speak at 17:30 GMT.

Indeed, fresh comments from the central bank hawk may prop up the greenback as Mr. Fisher persistently argues against the highly accommodative policy stance, and we may see the USDOLLAR threaten the bearish trend carried over from the previous month amid the shift in the policy outlook. In turn, the reserve currency may continue to trade higher over the remainder of the week, but the 38.2 percent Fib retracement (10,803) needs to give way to see a move back towards the 11,000 handle. 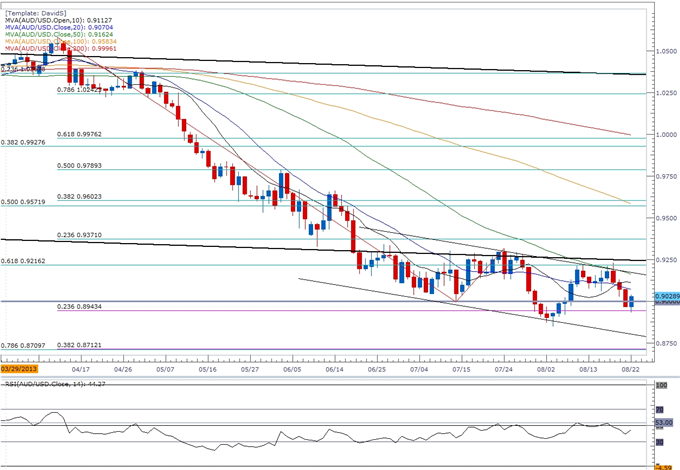 Two of the four components weakened against the greenback, led by a 0.84 percent decline in the Japanese Yen, while the Australian dollar gained 0.66 percent against its U.S. counterpart amid the positive data coming out of China – Australia’s largest trading partner.

Nevertheless, we will look for opportunities to sell the higher-yielding currency as the downward trending channel continues to take shape, and the AUDUSD looks poised for a move downward towards the 0.8700 handle as it carves a lower high in August.

Join the Analyst on Demand service to trade along side the DailyFX Research Team!