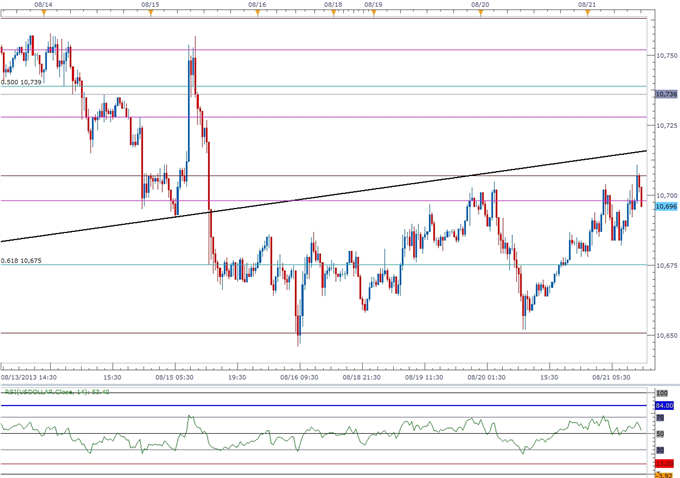 The Dow Jones-FXCM U.S. Dollar Index regained its footing ahead of the FOMC Minutes, while we’re seeing the British Pound outperform against its major counterparts.

The Dow Jones-FXCM U.S. Dollar Index (Ticker: USDollar) marked a fresh weekly high of 10,711 ahead of the Federal Open Market Committee (FOMC) Minutes, but the topside break in the greenback may be short-lived as market participants weigh the outlook for monetary policy.

Indeed, we saw a fairly muted reaction to the U.S. Existing Home Sales report even though it exceeded market expectations, and the fresh batch of central bank rhetoric may make or break the greenback amid speculation that the FOMC will start to taper its asset-purchase program at the September 17-18 meeting. There’s a limited risk of seeing fresh session highs ahead of the policy statement as the 30-minute relative strength index comes off of overbought territory, but the technical outlook favor a bullish forecast for the reserve currency as it continues to carve a higher low in August. 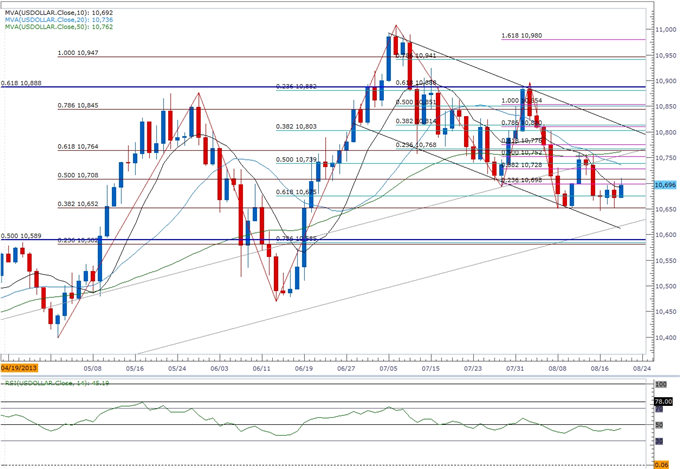 The FOMC Minutes may spark a potential shift in the policy outlook should we see further details surrounding the exit strategy, and we may see a growing number of Fed officials turn increasingly upbeat towards the economy as the recovery gradually gathers pace. If the FOMC sound less-dovish this time around, we should see the dollar continue to carve a series of higher highs paired with higher lows, and we will implement a ‘buy the dip’ strategy for the greenback as the central bank moves away from its easing cycle.

However, should the policy statement dampen the scope of seeing the FOMC switch gears in September, a break below the 10,650 region would bring up the 23.6 percent Fibonacci expansion (10,582) on our radar, which coincides with the 78.6 percent retracement at 10,585. 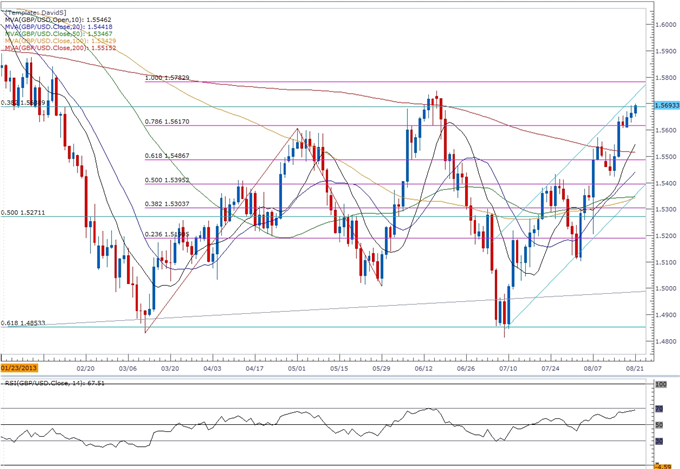 Three of the four components weakened against the reserve currency, led by a 0.55 percent decline in the Australian dollar, while the British Pound bucked the trend, with the GBPUSD climbing to a fresh monthly high of 1.5701.

The GBPUSD should continue to benefit from the stronger recovery in the U.K. as it dampens the Bank of England’s (BoE) scope to retain its current policy, but the British Pound may also take on a safe-haven role amid the ongoing turmoil in the euro-area. As Greece looks for additional external support, the renewed threat of a euro-area breakup may heighten the appeal of the sterling, and the bullish momentum underlying the British Pound may gather pace ahead of the next BoE meeting on September 5 as the U.K. economy gets on a firmer footing.