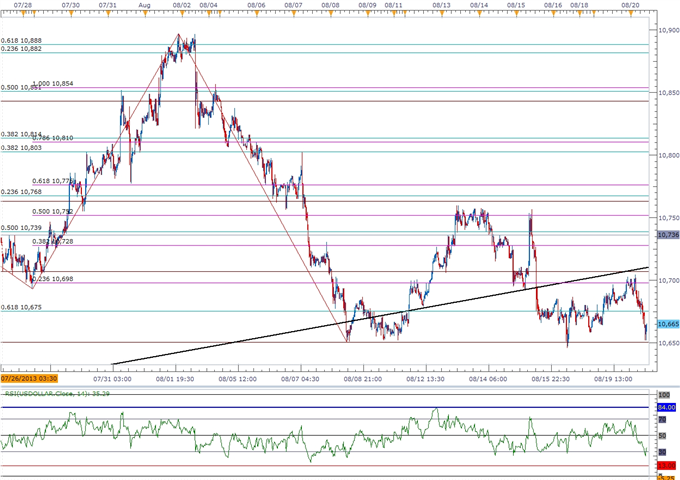 Although the Dow Jones-FXCM U.S. Dollar Index (Ticker: USDollar) remains 0.21 percent lower from the open, the near-term correction greenback could be coming to an end as it continues to carve a higher low in August.

Indeed, the dollar looks constructive as it continues to find key support around the 38.2 percent Fibonacci expansion around 10,652, and we may see a rebound take shape over the next 24-hours of trading as the 30-minute relative strength index pushes into oversold territory. In turn, the reserve currency may continue to coil up going into the Fed Economic Symposium kicking off on August 22, and we will revert back to the ‘buy the dip’ strategy for the USD as we anticipate the Federal Reserve to strike an improved outlook for the world’s largest economy. 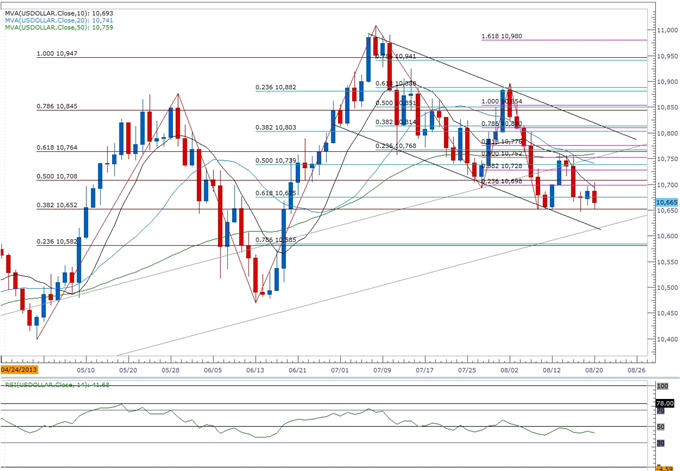 The Federal Open Market Committee (FOMC) Minutes may serve as the fundamental catalyst to trigger a near-term rally in the USD as the central bank continues to call for a stronger recovery in the second-half of the year, but the group may keep their lips tight regarding the September 17-18 meeting amid growing speculation that the Fed will start to taper its asset-purchase program next month.

However, should the FOMC show a greater willingness to retain its highly accommodative policy stance over the near-term, a dovish statement may spark a move back towards the 23.6 percent Fib (10,582), which coincides with the 78.6 percent expansion around 10,585. 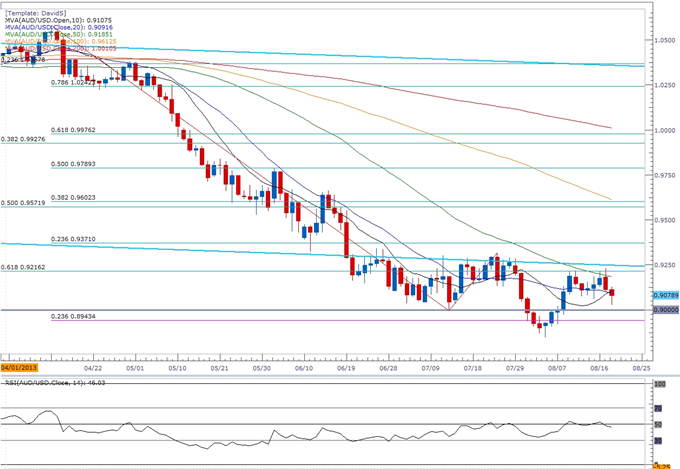 Three of the four components strengthened against the greenback, led by a 0.67 percent rally in the Euro, while the Australian dollar bucked the trend as the Reserve Bank of Australia (RBA) kept the door open to push the benchmark interest rate to a fresh record-low.

Although the RBA noted that another rate cut is not imminent, the central bank highlighted the risk of a more pronounced slowdown in China – Australia’s largest trading partner – and it seems as though Governor Glenn Stevens will continue to push for a weaker exchange rate in an effort to balance the risks surrounding the region.

The technical outlook for the AUDUSD continues to eye downside targets as it carves a lower high around the 61.8 percent retracement around 0.9210-20, and the higher-yielding currency remains poised to face additional headwinds over the near to medium-term as the RBA continues to embark on its easing cycle.

Join the Analyst-on-Demand Service to Trade Alongside the DailyFX Research Team!