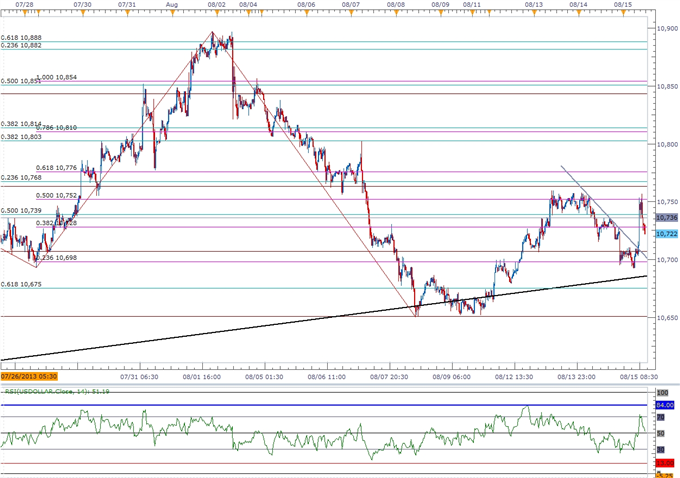 The Dow Jones-FXCM U.S. Dollar Index (Ticker: USDollar) is falling back from a high of 10,756 as the Philadelphia Fed survey fell short of market expectations, and the greenback may continue to consolidate during the North American trade as the 30-minute relative strength index falls back from overbought territory.

Indeed, the USDOLLAR 50.0 percent Fibonacci expansion around 10,708 may come back on the radar as the greenback dips back below the 38.2 percent expansion around 10,728, and the reserve currency may continue to face range-bound prices over the remainder of the week as the index marks another failed run at the 61.8 percent expansion around 10,764. Nevertheless, as the dollar breaks out of the downward trend from earlier this week, we will continue to look for opportunities to buy dips in the greenback, and should see the index continue to carve the series of higher highs paired with higher lows amid the growing arguments for the Federal Reserve to scale back its asset-purchase program at the September 17-18 meeting. 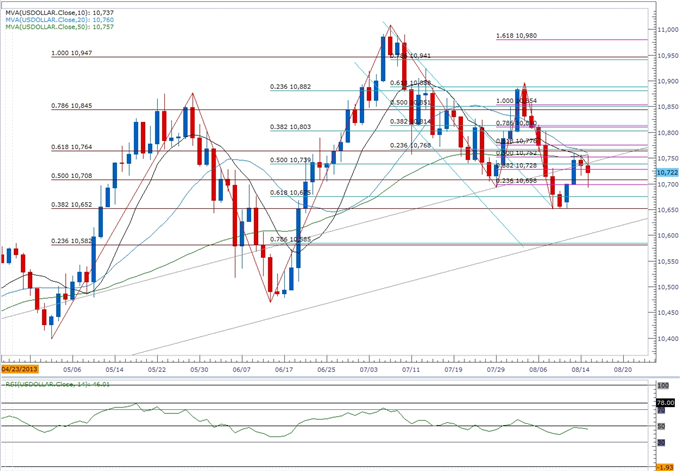 In light of the recent comments from FOMC voting member James Bullard, it seems as though the St. Louis Fed President is softening his dovish tone for monetary amid the ‘clear’ improvements in the labor market, and we may see a growing number of central bank officials show a greater willingness to move away from the easing cycle as the economic recovery gradually gathers pace.

Nevertheless, the USDOLLAR looks poised for further advances as long as it preserves the higher low around the 38.2 percent Fib around 10,652, and the policy outlook should drive the reserve currency higher over the near to medium-term as the Fed looks to implement its exit strategy in the coming months. 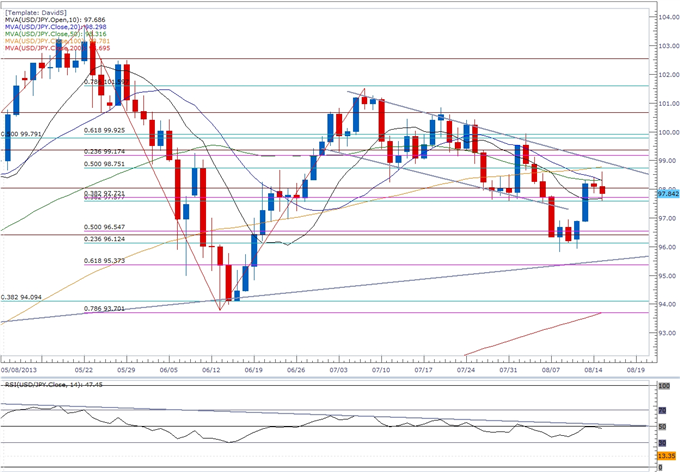 Three of the four components rallied against the greenback, led by a 0.48 percent advance in the British Pound, while the Japanese Yen added 0.25 percent as the USDJPY preserves the downward trend carried over from the previous month.

Although the lower swings in the dollar-yen casts a bearish outlook over the near-term, we’re keeping a close eye on the relative strength index as it comes up against trendline resistance, and would need to see a bullish break in the oscillator to revert back a ‘buy-the-dip’ strategy.

Indeed, the rebound off of the 38.2 percent retracement (97.50-60) may set the stage for a bullish breakout as Moody’s Investor Services warned that weaker-than-expected 2Q GDP report coming out of the region is credit negative for Japan, and we may see the Bank of Japan (BoJ) come under increased pressure to further embark on its easing cycle as the new government struggles to draw up a credible plan to encourage a stronger recovery.