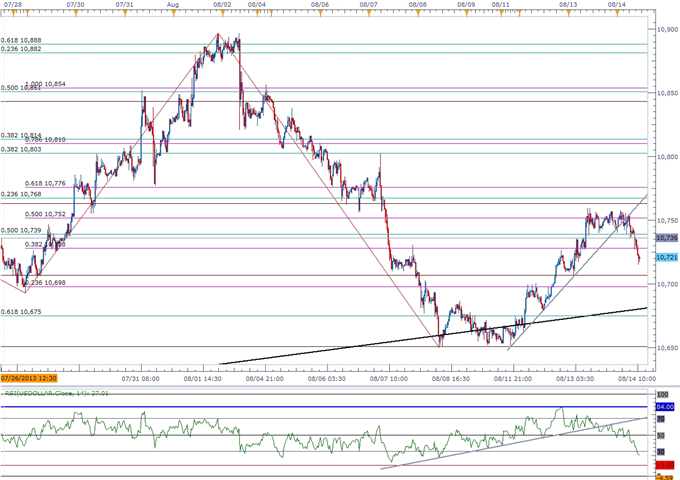 In light of the marked rebound in the GBPUSD, the Dow Jones-FXCM U.S. Dollar Index (Ticker: USDollar) slipped back below the 38.2 percent Fibonacci expansion (10,728), and we may see a more meaningful correction over the next 24-hours of trading as 50.0 percent expansion around 10,708 comes into focus.

Indeed, the weaker-than-expected U.S. Producer Price report dragged the dollar lower as it raises the threat for deflation, but the reserve currency appears to be regaining its footing following the New York Fed survey on private sector credit, which showed household indebtedness contracting 0.7 percent during the second-quarter. In turn, the dollar decline looks poised to taper off during the North American trade as the 30-minute relative strength index bounces back from a low of 25, and the fundamental developments on tap for later this week may encourage a more meaningful rally in the greenback as the outlook for growth improves. 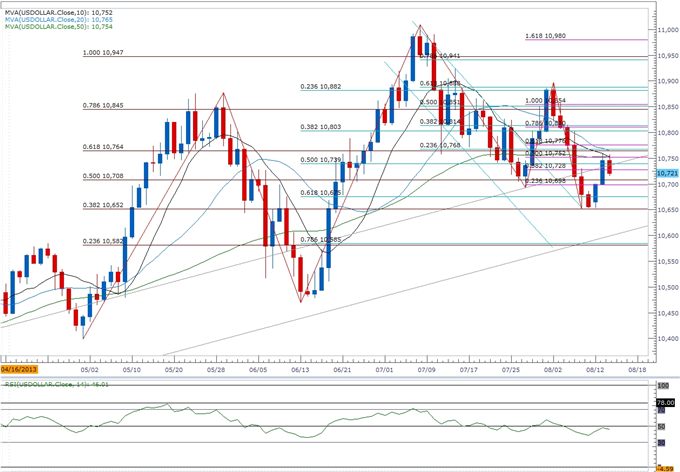 Beyond the U.S. data prints, we will be keeping a close eye on the news wires as FOMC voting member James Bullard is scheduled to speak on monetary policy at 13:20 ET, and we may see the fresh batch of central bank rhetoric produce a more meaningful move at the 50.0 percent expansion (10,708) should the St. Louis Fed President see scope to retain the highly accommodative policy stance at the September 17-18 meeting.

Nevertheless, the pullback in the USD may offer a potential long entry as carves out a higher low in August, and we will look to buy dips in the greenback as the bullish series continues to take shape. 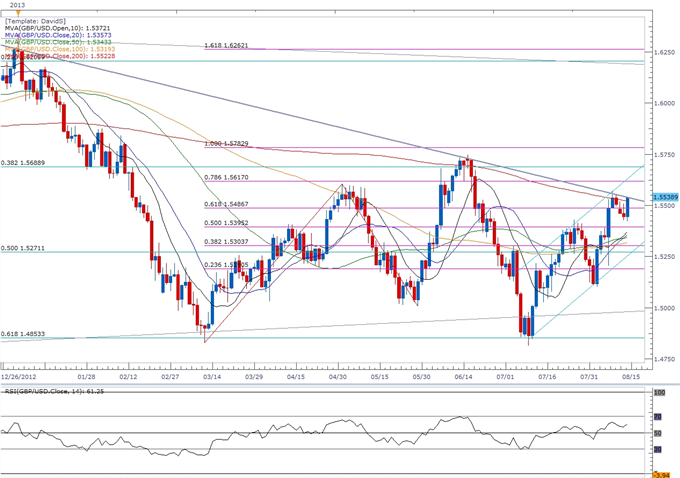 The greenback weakened across the board, led by a 0.59 percent advance in the British Pound, and the GBPUSD may continue to threaten the downward trend from earlier this year as Bank of England (BoE) board member Martin Weale dissents against the majority and looks to shorten the timeframe for the inflation ‘knock out.’

Beyond the BoE Minutes, the U.K. Employment report appears to be raising the outlook for price growth as Average Weekly Earnings marked the biggest advance since November 2011, and the Monetary Policy Committee may come under increased pressure to implement its exit strategy ahead of schedule as the region continues to face above-target inflation.

In turn, we are looking for a more meaningful run at the 78.6 percent expansion around 1.5610-20, but could see the 38.2 percent retracement of the 2009 range come into play amid the shift in the policy outlook.