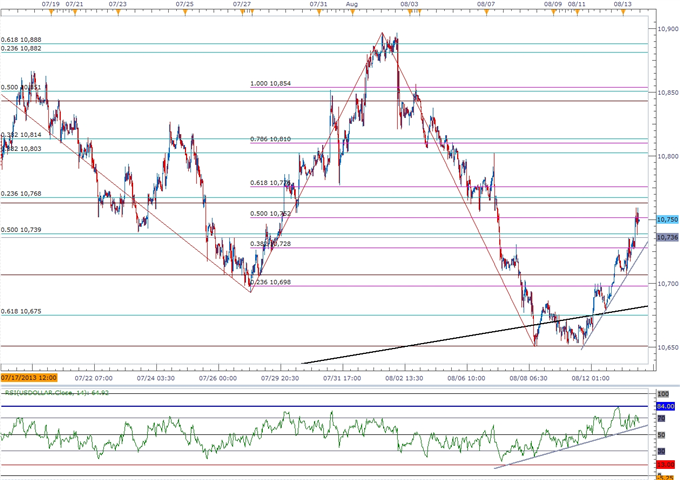 The Dow Jones-FXCM U.S. Dollar Index (Ticker: USDollar) climbed another 0.46 percent as U.S. Retail Sales increased for the fourth consecutive month in July, and the reserve currency may continue to retrace the decline from earlier this month as the data coming out of U.S. economy raises the Fed’s scope to taper the asset-purchase program at the September 17-18 meeting.

Although the headline reading for retail sales missed market expectations, the rise was largely driven by an increase in discretionary spending, and the resilience in private sector consumption may continue to raise the outlook for inflation as it encourages businesses to scale back on discounting. In turn, the bullish trend looks poised to gather pace in the coming days, but we may see a near-term correction in the USDOLLAR as the 30-minute relative strength index falls back from overbought territory. 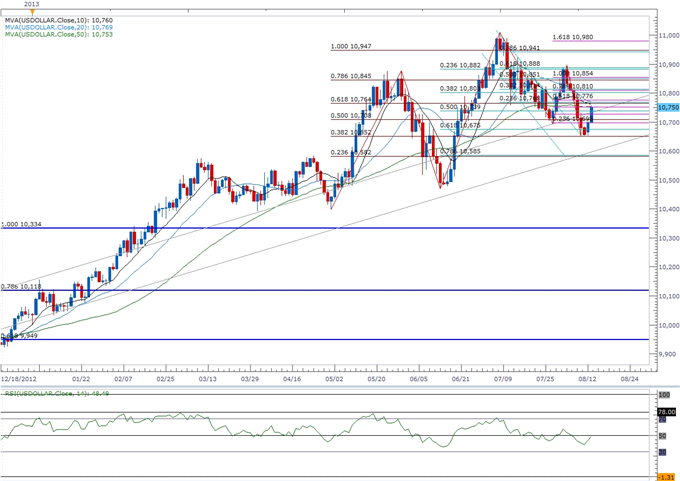 With the data out of the way, we will be closely watching the news wire as Atlanta Fed President Dennis Lockhart is scheduled to speak on the economy at 16:45 GMT, and we may see a growing number of central bank officials adopt a more hawkish tone for monetary policy as the recovery gradually gathers pace.

Indeed, the fundamental developments scheduled for the remainder of the week may continue to prop up the greenback should they raise the outlook for growth and inflation, and we will look for opportunities to buy dips in the USDOLLAR amid the growing argument for the FOMC to move away from its easing cycle. 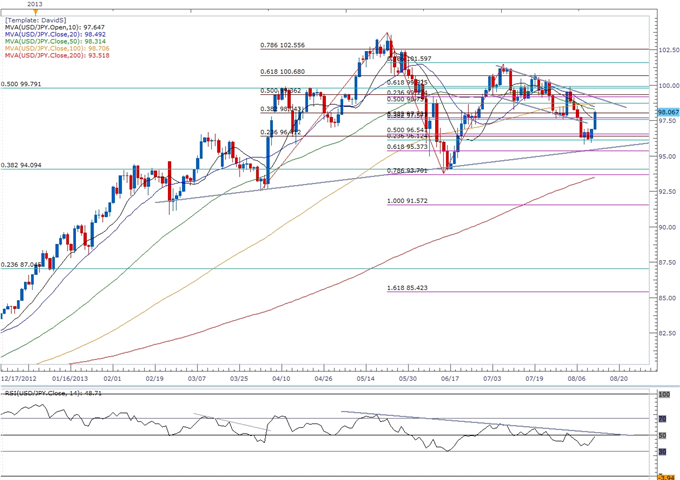 The greenback continued to rally across the board, led by a 1.21 percent decline in the Japanese Yen, and headlines surrounding the region’s fiscal policy may continue to drag on the low-yielding currency as it puts additional pressure on the Bank of Japan (BoJ) to further embark on its easing cycle.

Although the BoJ Minutes continued to show a broad range of dissenting comments, the central bank may look to do more at September 5 meeting as the new government weighs different options to spur a stronger recovery, but the Yen may continue to face additional headwinds over the near-term as Japanese policy makers struggle to draw up a credible plan to address the risks surrounding the region.

Indeed, we may see the USDJPY breakout of the downward trending channel carried over from the previous month as it carves out a higher low in August, and need to see a bullish break in the relative strength index as well to see the rebound from 95.79 gather pace.