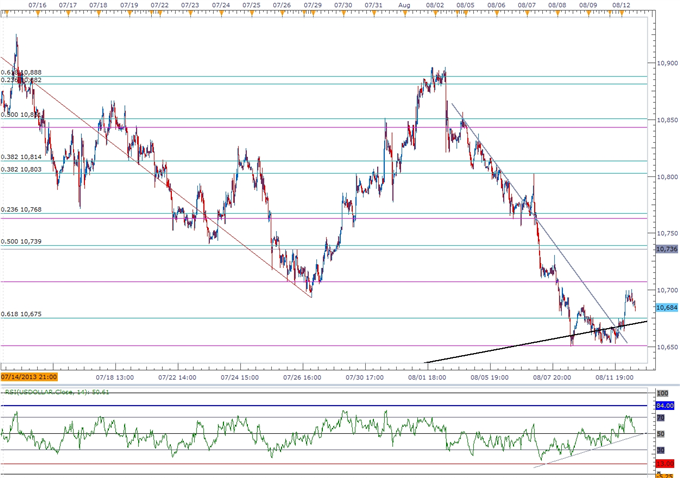 The Dow Jones-FXCM U.S. Dollar Index (Ticker: USDollar) is trading 0.22 percent higher from the open, with the greenback breaking out of the downward trend carried over from July, and the reserve currency may further retrace the decline from the previous month as it continues to find near-term support around the 10,650 region.

Although the economic docket remains fairly light throughout the North American trade, the technical outlook certainly points to a more meaningful rebound for the USDOLLAR, and the fundamental developments coming out in the days ahead may heighten the appeal of the reserve currency should they further the argument for the Federal Reserve to taper the asset-purchase program at the September 17-18 meeting. As we anticipate further dollar strength, we will look for a more meaningful move at the 50.0 percent Fibonacci expansion (10,708), but another failed run at the key figure may produce range-bound prices over the next 24-hours of trading as market participants weigh the outlook for monetary policy. 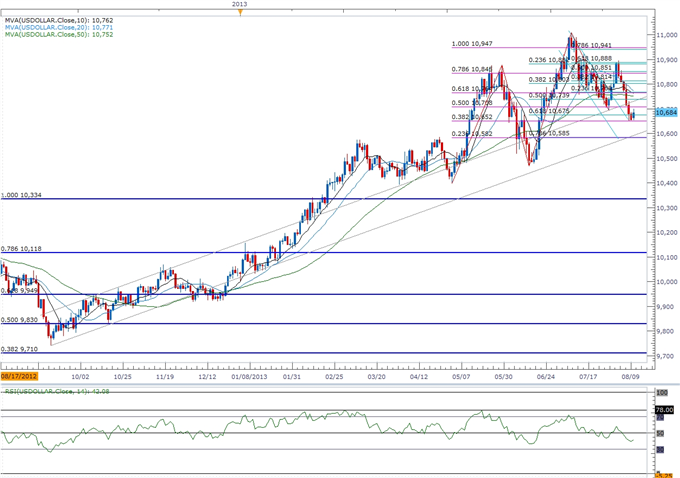 With U.S. Retail Sales projected to increase another 0.3 percent in July, the resilience in private sector consumption should help to encourage an improved outlook for growth, and a positive print may spark a more meaningful rebound in the USDOLLAR as it dampens the Fed’s scope to retain its highly accommodative policy stance.

Indeed, we may resort back to our game plan of buying dips in the dollar as the 38.2 percent Fib (10,652) appears to be holding up as a higher low, and may see a move back towards the 11,000 handle over the near to medium-term as the FOMC appears to be slowly moving away from its easing cycle. 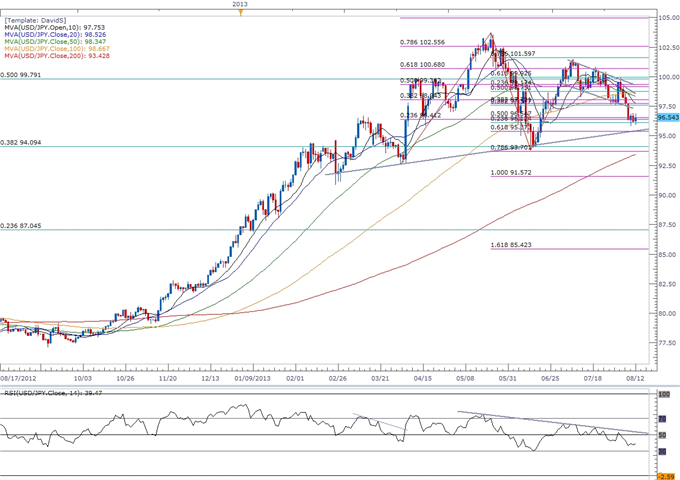 The greenback rallied across the board, with the Japanese Yen and Australian dollar taking the biggest hit, and the USDJPY also appears to be carving out a higher low as it continues to trade above trendline support.

In light of the downward revision to Japan’s 2Q GDP report, the Bank of Japan (BoJ) may come under increased pressure to implement more non-standard measures at the September 5 meeting, and the policy meeting minutes due out later tonight may show greater conformity with the board as the new government plans to raise the sales tax in 15 years to address the ballooning deficit.

As a result, we may see the USDJPY continue to track sideways going into the Asia-Pacific trade, but we may have an opportunity to implement a ‘buy the dip’ strategy for the pair once the 97.00 handle gives way.--- Written by David Song, Currency Analyst