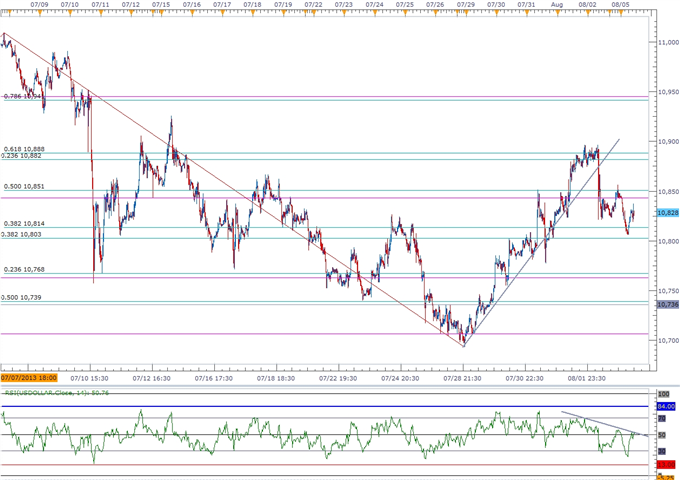 USD at Risk for Further Losses amid Head-and-Shoulders Top

The Dow Jones-FXCM U.S. Dollar Index (Ticker: USDollar) pared the decline to 10,806 as the ISM Non-Manufacturing survey advanced to 56.0 in July to mark the highest reading since February, but the lack of momentum to push back above the 78.6 percent Fibonacci expansion around 10,845 may spur further losses for the greenback as market participants scale back bets of seeing the FOMC taper its asset-purchase program at the September 17-18 meeting.

As the USDOLLAR fails to maintain the upward trend from the previous week, the index certainly appears to have carved a head-and-shoulders top coming into August, and the reserve currency looks poised for a more meaningful run at the 38.2 percent retracements around 10,803-14 as the 30-minute relative strength index remains stuck in a bearish trend. In turn, we may see further USD weakness over the near-term, but the ongoing discussion at the Federal Reserve to taper the asset-purchase program should prop up the greenback on a longer-term timeframe as the central bank appears to be slowly moving away from its easing cycle. 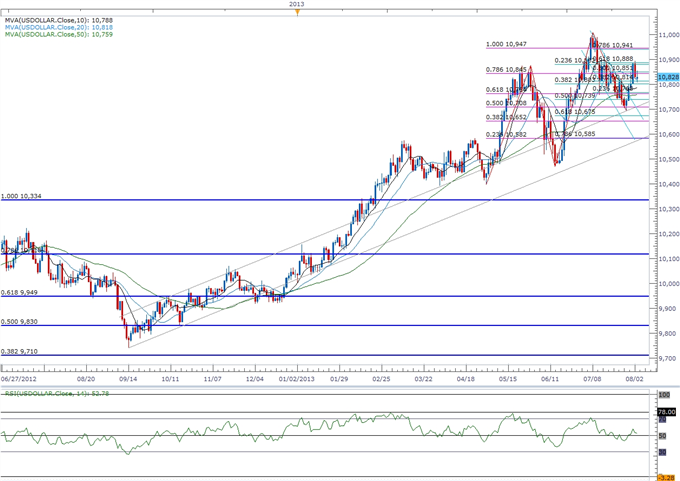 With Fed hawk Richard Fisher scheduled to speak later today, his comments are going to become increasingly important as the Dallas Fed President is scheduled to join the FOMC in 2014, and we should see the dollar continue to carve out a series of higher highs paired with higher lows amid the shift in the policy outlook.

As Mr. Fisher opposes the highly accommodative policy stance held by the FOMC, comments highlighting the central bank’s exit strategy may prop up the dollar, but dollar may continue to lose ground over the near-term as the dismal NFP report dampens the prospects for a stronger recovery. 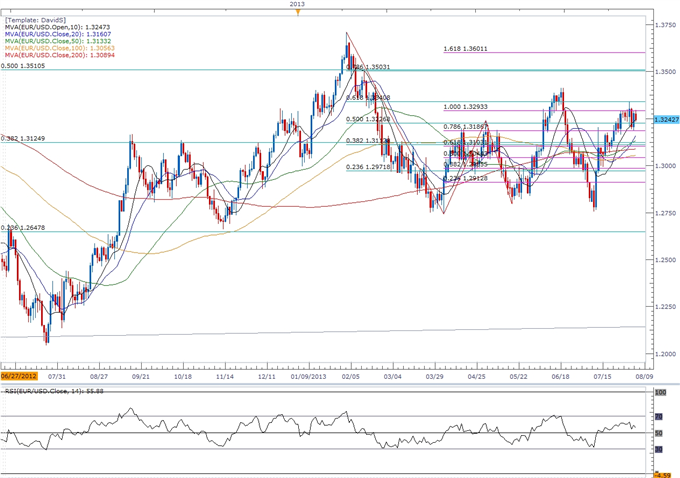 Three of the four components rallied against the greenback, led by a 0.32 percent in the Japanese Yen, and the low-yielding currency may continue to appreciate against its U.S. counterpart as the Bank of Japan(BoJ) is widely expected to retain its current policy at the August 8 meeting.

With the growing rift within the BoJ, Governor Haruhiko Kuroda may struggle to implement more non-standard measures over the near-term, and the wait-and-see approach should continue to prop up the Japanese Yen as the outlook for growth and inflation improves.

With that said, it looks as though the downward trending channel carried over from the previous month will continue to take shape in the days ahead, and we will look for another run at the 38.2 percent retracement around 97.60-70 amid the shift in the policy outlook.