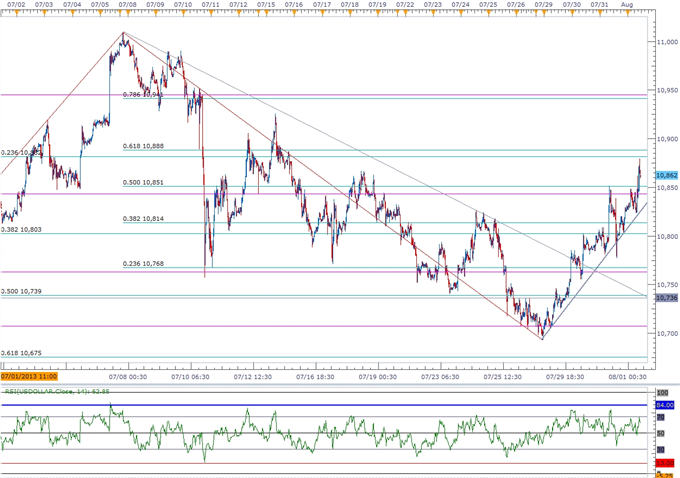 USD Rally Stalls Ahead of Resistance- Strong NFPs on Tap?

The Dow Jones-FXCM U.S. Dollar Index (Ticker: USDollar) rallied to 10,880 as the ISM Manufacturing survey expanded at the fastest pace since June 2011, and the reserve currency may continue to track higher over the near to medium-term as a bullish trend appears to be taking shape.

Although the USDOLLAR pierced below trendline support following the FOMC interest rate decision, we will continue to look for a series of higher highs paired with higher lows in the days ahead, but the greenback may consolidate ahead of the highly anticipated Non-Farm Payrolls report as the 30-minute relative strength index comes up against overbought territory. As a result, the lack of momentum to clear the 23.6 percent Fibonacci retracement (10,882) may produce a move back towards former resistance around 10,851, but the move may serve as a buying opportunity as the U.S. economy is expected to add another 185K jobs in July. 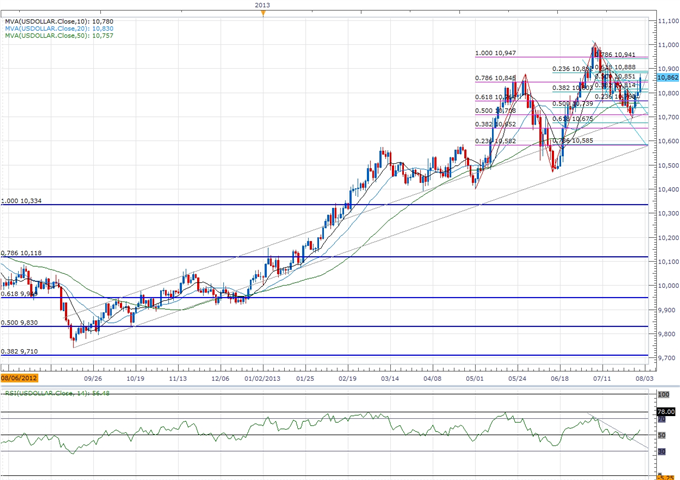 As the employment component for the ISM Manufacturing survey marks the highest print for 2013, it seems as though the NFP report will top market expectations, but we may see the jobless rate hold steady at an annualized 7.6 percent as discouraged workers return to the labor force.

Although there’s a risk of seeing a choppy reaction to the employment report, the more broad-based recovery in the labor market should heighten the appeal of the USD, and may further the argument for the Federal Reserve to taper its asset-purchase program as the economic recovery gradually gathers pace. In turn, we may see a the dollar extend the rebound from 10,693, and will be looking for a higher high over the near-term as it carves out a higher low in July. 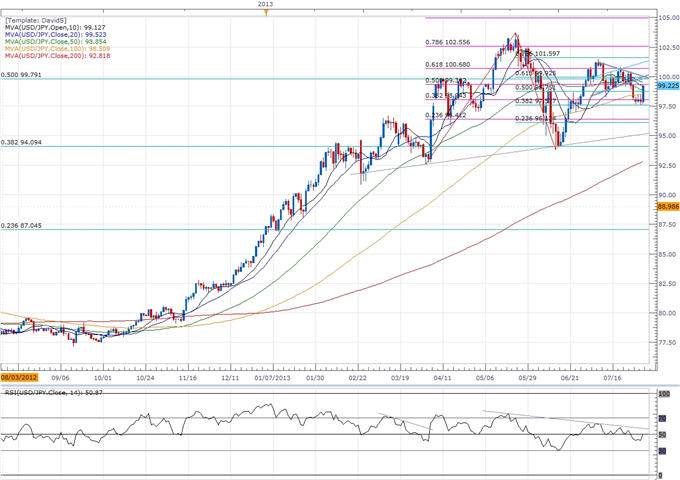 The greenback rallied across the board, led by a 1.36 percent decline in the Japanese Yen, but the USDJPY may consolidate going into the end of the week as it find interim resistance around the 50.0 percent Fib expansion around 99.30-40.

Nevertheless, as the USDJPY appears to have carved out a higher low around the 38.2 percent retracement (97.50-60), we would like to see the relative strength index break out of the downward trend for added confirmation, and the pair could be coiling up for a more meaningful run at the 104.00 handle amid the growing discussion at the Fed to scale back on QE. However, as the Bank of Japan (BoJ) is widely expected to retain its current policy in August, the wait-and-see approach may prop up the Japanese Yen, and we may see Governor Haruhiko Kuroda struggle to implement more non-standard measures over the near-term amid the growing rift within the central bank.

In turn, the neutral stance may produce range-bound prices going into the BoJ rate decision on August 8, but the deviation in the policy outlook continues to foster a bullish outlook for the pair as it continues to carve a series of higher highs paired with higher lows.