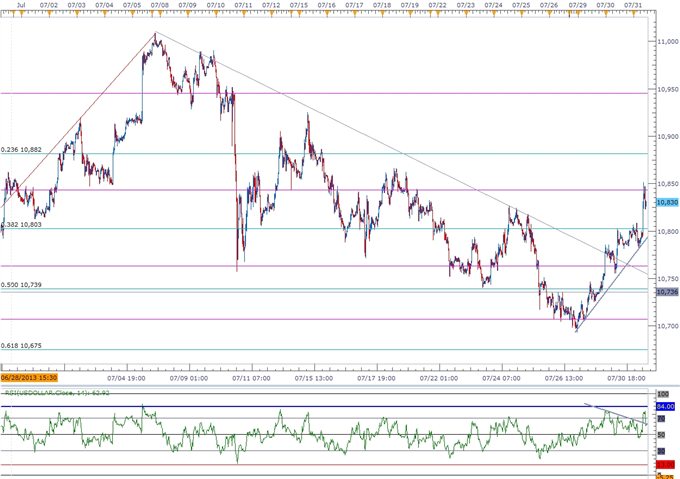 Two Scenarios for FOMC- Will the Fed Support the USD Breakout?

The Dow Jones-FXCM U.S. Dollar Index (Ticker: USDollar) gained another 0.38 percent on the back of the better-than-expected 2Q U.S. GDP report, and the reserve currency may track higher in August as it breaks out of the downward trend from earlier this month.

As the greenback carves out a new series of higher highs paired with higher lows, the upward trending channel looks poised to get carried into the month ahead, and we will look to buy dips in the greenback as the fundamental outlook for the world’s largest economy improves. However, the dollar may continue to consolidate ahead of the FOMC interest rate decision coming up at 18:00 GMTas the 30-minute relative strength index falls back from overbought territory, and the fresh batch of central bank rhetoric may generate a larger correction in the greenback should the central bank sound more dovish this time around. 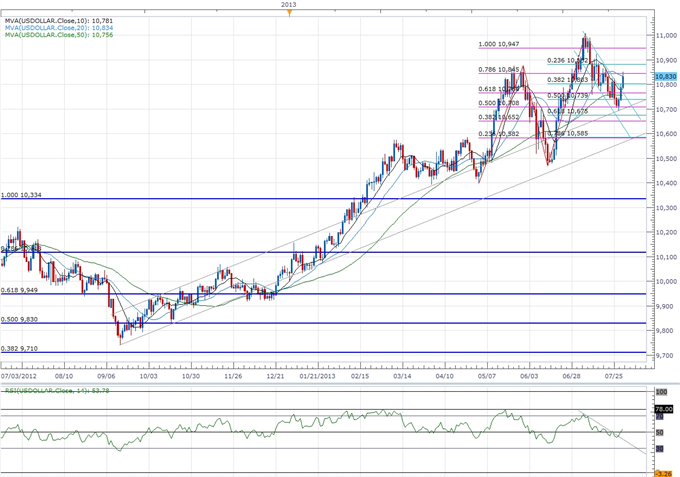 Indeed, there’s a few scenarios that we’ll be watching for the FOMC interest rate decision, and the statement accompanying the rate decision is likely to heavily impact the dollar amid the growing discussion at the central bank to taper the asset-purchase program.

Bullish Dollar Scenario: Should the FOMC sound more upbeat this time around and provide further details surrounding its exit strategy, growing speculation for less accommodation could fuel another rally in the USD and produce a more meaningful run at the 23.6 percent Fibonacci extension around 10,882. At the same time, even a neutral tone from the Fed may heighten the appeal of the dollar amid the growing argument to scale back on quantitative easing.

Bearish Dollar Scenario: There’s speculation that the FOMC will shift its forward-guidance in favor of its highly accommodative policy stance, which would include a lower threshold for inflation and unemployment. Should the Fed scale back its willingness to halt the easing cycle, a more dovish central bank may spark a sharp reversal in the reserve currency. 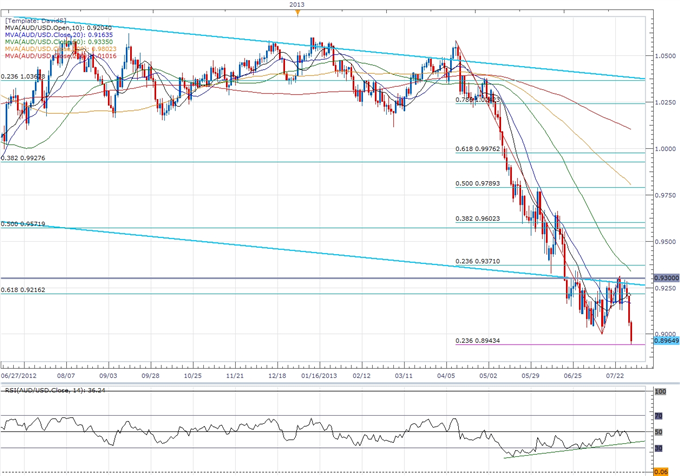 Three of the four components weakened against the greenback, led by a 1.06 percent decline in the Australian dollar, and the AUDUSD may face additional headwinds over the near-term amid growing speculation that the Reserve Bank of Australia (RBA) will introduce another rate cut at the August 6 meeting.

As the AUDUSD comes up against the 23.6 percent extension around 89.40-50, the figure may provide soft support going into the FOMC rate decision, but a bearish break in the relative strength index may open the door for further Australian dollar losses as the RBA retains a highly dovish tone for monetary policy. As the AUDUSD carves out a lower top around the 0.9300 handle, the pair may continue to search for support in the days ahead, and we will maintain a bearish outlook for the pair as interest rate expectations deteriorate.