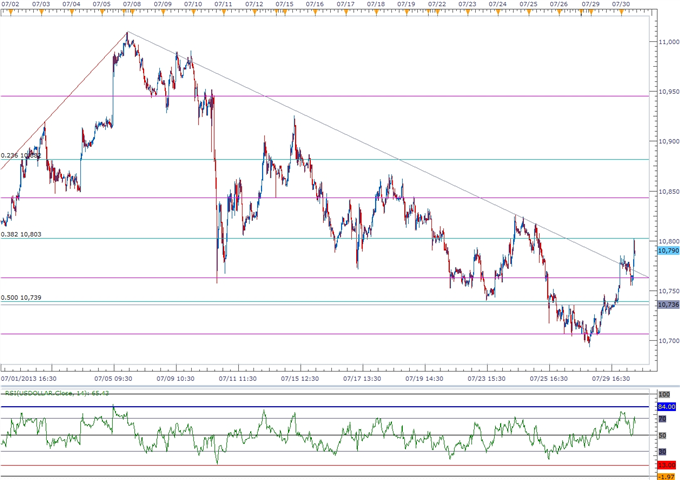 USDOLLAR Hits Resistance Ahead of 2Q GDP- AUD Looks Below 0.90

Although the Dow Jones-FXCM U.S. Dollar Index (Ticker: USDollar) appears to have broken out of the downward trend from earlier this month, the greenback may track lower ahead of the advance U.S. 2Q GDP report as the near-term rebound appears to be capped by the 38.2 percent Fibonacci retracement around 10,803.

As the 30-minute relative strength falls back from overbought territory, the lower high in the USDOLLAR may ultimately lead to lower low in the coming days, and the greenback may face a sharp selloff over the next 24-hours of trading should the economic docket further the Fed’s argument to retain its easing cycle. As a result, we will target the downside objectives ahead of the FOMC interest rate decision scheduled for tomorrow at 18:00 GMT, and the fresh batch of central bank rhetoric may dampen the appeal of the reserve currency should the committee shift the policy outlook in favor of its highly accommodative policy stance. 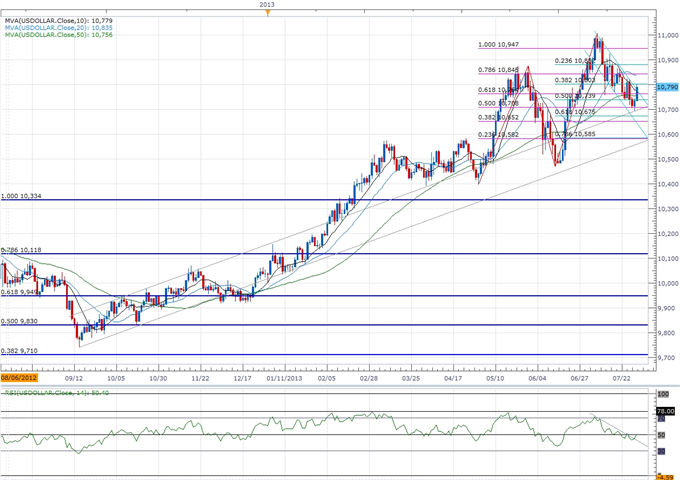 The topside break in the relative strength index certainly raises the scope of seeing a bullish breakout in the USDOLLAR, and we will continue to look for a higher low in the index before implementing our game plan of buying dips in the greenback. As the U.S. economy is expected to expand a slower pace during the second quarter, a marked slowdown in GDP may spark a move back towards the 50.0 percent Fib around the 10,739 region, but the dollar may struggle to hold above the 10,700 handle ahead of the highly anticipated Non-Farm Payrolls report should the FOMC sound more dovish this time around. In turn, we may see the downward trending channel get carried into August, and the reserve currency may persistently search for support in the coming days as market participants weigh the outlook for monetary policy. 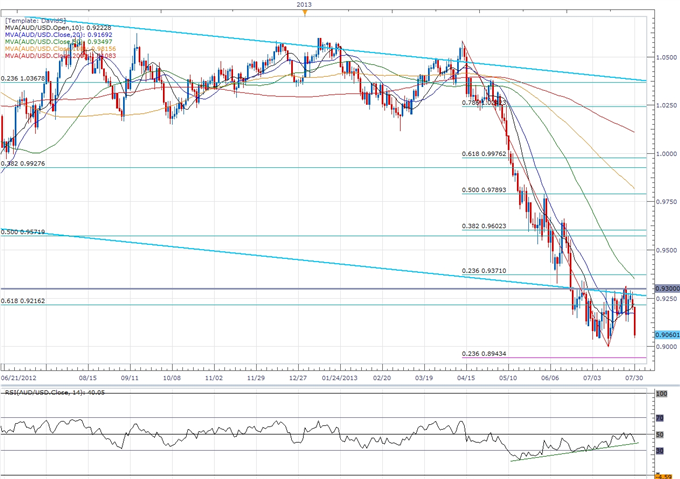 The dollar rallied across the board, driven by a 1.58 percent decline in the Australian dollar, and the higher-yielding currency remains poised to face additional headwinds over the near to medium-term as the interest rate outlook deteriorates. As Reserve Bank of Australia (RBA) Governor Glenn Stevens shows a greater willingness to push the benchmark interest rate to a fresh record-low, the bearish sentiment surrounding the aussie may gather pace in August, and we may see the 0.9000 handle give way as manufacturing in China – Australia’s largest trading partner – is expected to contract in July.

According to Credit Suisse overnight index swaps, market participants are pricing a 92 percent change for a 25bp rate cut at the August 6 meeting, but see 50bp worth of rate cuts over the next 12-months as the outlook for growth and inflation remains weak. In turn, a break to the downside should expose the 23.6 percent Fib expansion around 0.9840-50, and we will look for further declines ahead of the RBA meeting amid growing speculation for lower borrowing costs.