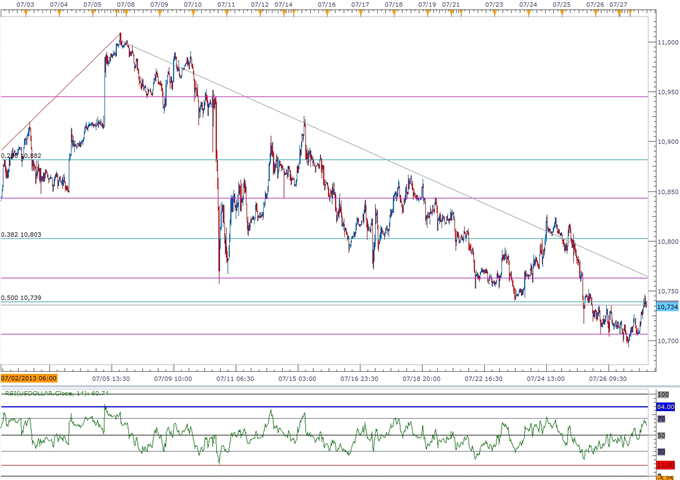 Although the Dow Jones-FXCM U.S. Dollar Index (Ticker: USDollar) is trading 0.13 percent higher from the open, the lack of momentum to hold above the 50.0 percent Fibonacci retracement around 10,739 certainly points to further weakness in the greenback as the downward trend from earlier this month continues to take shape. Indeed, the better-than-expected U.S. Pending Home Sales report propped up the dollar coming into the North American trade, but the rebound may offer an opportunity to sell the greenback as the 30-minute relative strength index comes up against overbought territory.

In light of the recent price action, the greenback appears to be carving out a lower high during the final days of July, and the bearish momentum may gather pace ahead of the major event risks on tap for later this week as the advance GDP report is expected to show the world’s largest economy growing at a slower pace in the second-quarter. As a result, we may see another move back below the 10,700 handle, and the reserve currency may continue to search for support as market participants anticipate a more dovish FOMC at the July 31 meeting. 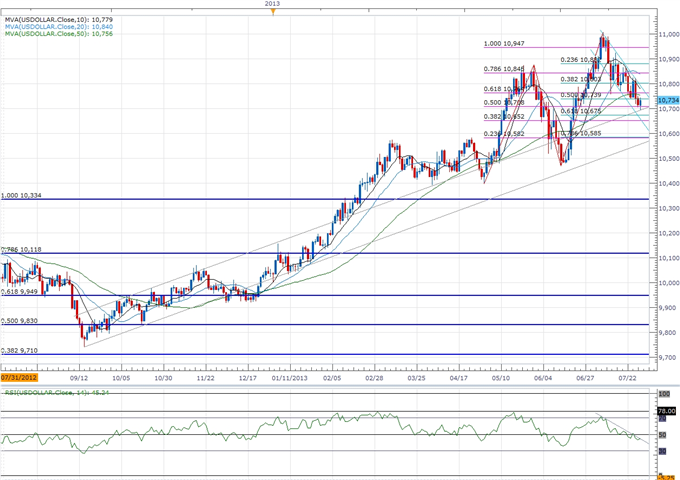 Although former trendline resistance appears to be acting as support, the next level to watch comes in at 10,675, the 61.8 percent Fib, and we may see a broader correction going into August as traders continue to weigh the implications of the Jon Hilsenrathreport. Beyond the July 31 rate decision, there’s growing speculation that the September 17-18 meeting could be the game-changer as the central bank is set to release its updated forecast, and we may see a growing number of Fed officials turn increasingly upbeat towards the economy as the recovery gradually gathers pace. Indeed, we are still waiting for the USDOLLAR to carve out a higher low, and will look to buy dips on a longer-term scale as the Fed slowly moves away from its easing cycle. 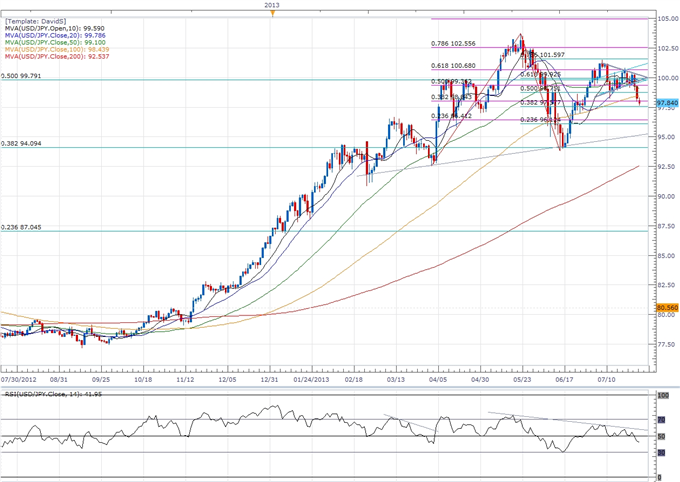 Three of the four components continued to weaken against the greenback, led by a 0.58 percent in the Australian dollar, while the Japanese Yen bucked the trend as Bank of Japan (BoJ) Governor Haruhiko Kuroda struck a rather improved outlook for the world’s third-largest economy. In light of the recent language coming out of the BoJ, it seems as though the central bank will sit pat at the August 8 meeting, and Governor Kuroda may struggle to implement more non-standard measures over the near-term as there appears to be a growing rift within the board.

In turn, the bearish break in the USDJPY should gather pace in the days ahead, and we may see a more meaningful decline in the exchange rate, which would expose the key region between 96.10-40. Nevertheless, we will look to buy the dollar-yen on a longer-term scale as the BoJ remains poised to further embark on its easing cycle, and the USDJPY should resume the bullish trend carried over from the previous year amid the deviation in the policy outlook.