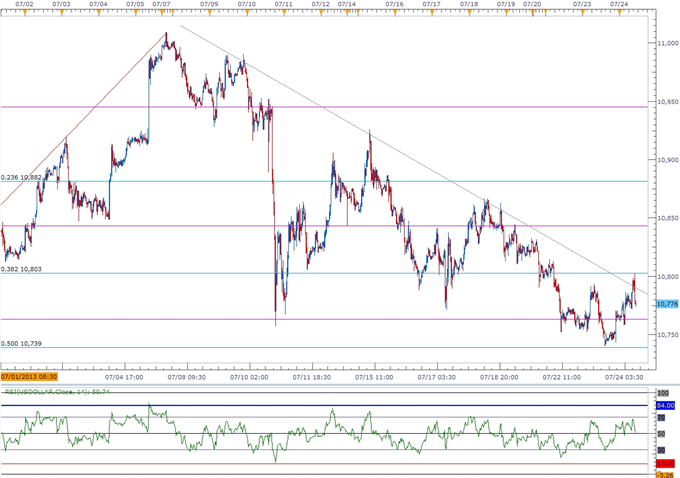 The Dow Jones-FXCM U.S. Dollar Index (Ticker: USDollar) is 0.27 percent higher from the open as U.S. New Home Sales increased 8.3 percent in June amid forecasts for a 1.7 percent print, and the greenback may continue to track higher over the remainder of the week as the reserve currency appears to be breaking out of the bearish trend from earlier this month. However, as the USDOLLAR struggles to push back above the 38.2 percent Fibonacci retracement around 10,803, the lack of momentum to clear the key figure may spark a short-term pullback, and we will keep a close eye on the 30-minute relative strength index as it turns around ahead of overbought territory. In turn, we may see another run at the 50.0 percent retracement around 10,739, but we will look to buy dips on a longer-term scale amid the growing argument at the Federal Reserve to taper the asset-purchase program. 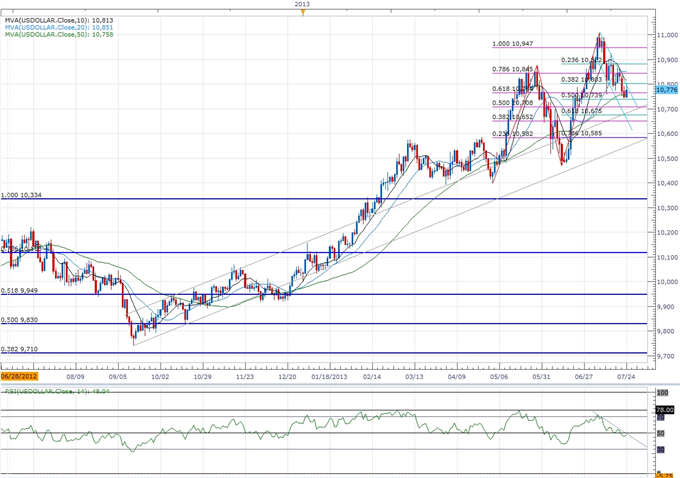 As the USDOLLAR appears to have made a false break, we may need to wait a little longer for the bullish flag formation to pan out, and we may see a further decline in the greenback as the relative strength index remains stuck in a downward trend. Nevertheless, as U.S. President Barack Obama is scheduled to speak on the economy at 12:55 EDT, the commander-in-chief may use this opportunity to address the fiscal drag, and any comments highlighting an improved outlook for growth may spur a bullish reaction in the reserve currency as the Fed anticipates a stronger recovery in the second-half of the year. In turn, we are still waiting for the greenback to carve out a higher low, and the bullish sentiment surrounding the USD should gather pace throughout the second-half of the year as the FOMC appears to be slowly moving away from its easing cycle.

Two of the four components weakened against the greenback, led by a 0.85 percent decline in the Australian dollar, and the higher-yielding currency may continue to face range-bound prices in the days ahead as it struggles to make any meaningful advances above the 0.9300 handle. As Australia’s Consumer Price report fuels speculation for another rate cut, the AUDUSD may continue to give back the rebound from earlier this month (0.8997) ahead of the next Reserve Bank of Australia (RBA) interest rate decision on August 6, and Governor Glenn Stevens may show a greater willingness to further embark on the easing cycle in the coming months as China – Australia’s largest trading partner – faces a growing risk for a ‘hard landing.’ In turn, we may see the Australian dollar continue to underperform against its major counterparts, and we will maintain a bearish outlook for the AUDUSD as the downward trend dating back to 2011 continues to take shape.