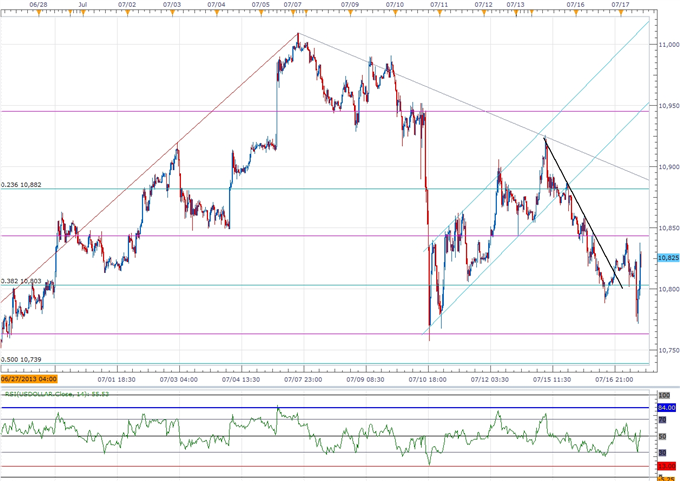 The Dow Jones-FXCM U.S. Dollar Index (Ticker: USDollar) is now trading 0.18 percent higher from the open as Fed Chairman Ben Bernanke reiterated that the FOMC is prepared to taper the asset-purchase program later this year, and the near-term rebound in the greenback may gather pace over the remainder of the week as the central bank slowly moves away from its easing cycle. At the same time, it seems as though the committee is running out of arguments to retain its highly accommodative policy stance as the economic recovery gradually gathers pace, and the Fed looks poised to switch gears later this year as the region gets on a more sustainable path. As the USDOLLAR appears to be building a short-term base above the 61.8 percent Fibonacci expansion around 10,764 and breaks out of the downward trend from earlier this week, we should see a more meaningful rebound in the greenback, and the bullish sentiment surrounding the reserve currency should gather pace throughout the near to medium-term amid the shift in the policy outlook. 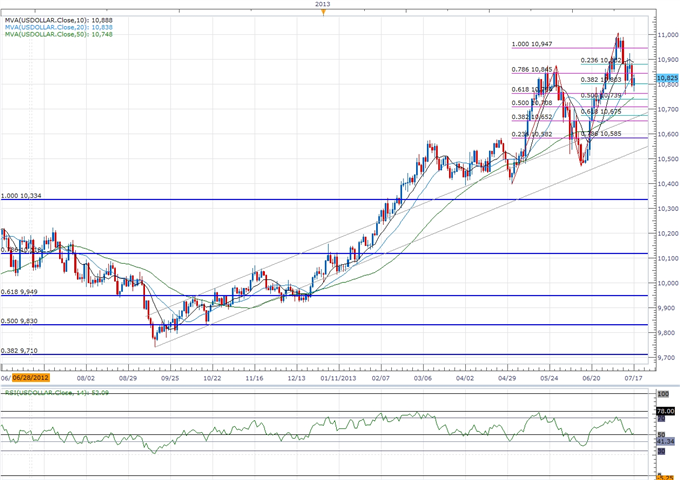 Beyond the Humphrey-Hawkins testimony, the Fed’s Beige Book is due out later today at 14:00 ET, and the survey may highlight an improved outlook for the U.S. economy, which could provide another fundamental catalyst to drive the dollar higher. Although there remains a risk of seeing a larger correction in the USDOLLAR, we may see limited pullbacks in the greenback as the FOMC scales back its willingness to expand the balance sheet further, and we will continue to look for opportunities to buy dips in the reserve currency as the Fed looks to implement its exit strategy. In turn, the 61.8 percent Fib may serve as the higher low we were waiting for, and we may see another run at the 11,000 handle as market participants scale back bets for more quantitative easing.

The greenback rallied across the board, led by a 0.62 percent decline in the Japanese Yen, but the British Pound bucked the trend as the Bank of England (BoE) Minutes showed the Monetary Policy Committee voting unanimously to retain its current policy. Although the BoE pledged to implement a ‘mixed strategy’ for monetary policy, it seems as though Governor Mark Carney may utilize central bank rhetoric/transmission mechanisms to manage the risks surrounding the U.K. economy, but it seems as though the MPC is slowly moving away from its easing cycle as they anticipate a stronger recovery in the second-half of 2013. Although we’re seeing the GBPUSD struggle to trade back above the 50.0 percent Fib from the 2009 range (1.5270), we anticipate a move back towards the 38.2 percent retracement (1.5680-90) amid the shift in the vote count, and we may see a growing number of BoE officials adopt a more hawkish tone for monetary policy as inflation is expected to hold above the 2 percent target over the policy horizon.