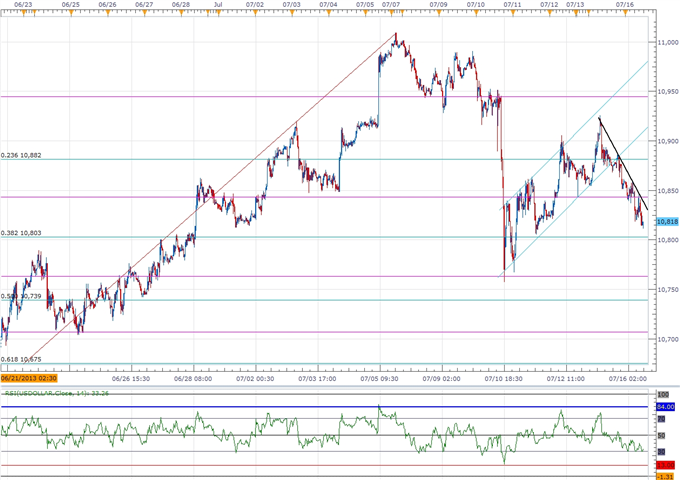 The Dow Jones-FXCM U.S. Dollar Index (Ticker: USDollar) is trading 0.54 percent lower from the open despite the slew of positive data coming out of the world’s largest economy, and the reserve currency may continue to consolidate ahead of the Humphrey-Hawkins testimony with Fed Chairman Ben Bernanke amid the growing discussion at the central bank to taper the asset-purchase program. Although a head-and-shoulders top appears to be taking shape, the dollar may regain its footing over the next 24-hours of trade as the 30-minute relative strength index comes up against oversold territory, and we may see the greenback breakout of the downward trend from earlier this week on a move back above the 78.6 percent Fibonacci expansion around 10,843. As the shift in the policy outlook limits the downside for the greenback, we will look to buy dips on a longer-term scale, and will continue to look for a higher low in the index as the central bank appears to be slowly moving away from its easing cycle. 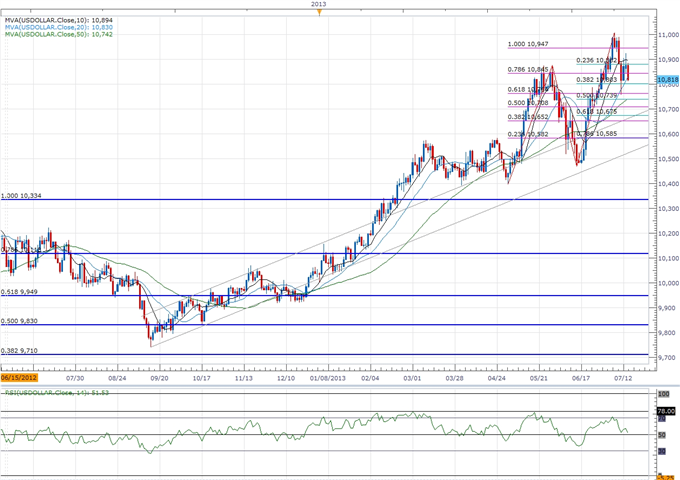 As the Fed anticipates a stronger recovery in the second-half of the year, Kansas City Fed President Esther George, who serves on the FOMC, argued that the committee should start to scale back on quantitative easing ‘sooner’ rather than later, and went onto say that the central bank should not keep the benchmark interest too low for too long as the economy gets on a more sustainable path. Indeed, there’s growing speculation that the Fed will start to taper its asset-purchase program at the September 17-18 meeting, and we may see Chairman Bernanke lay out a more detailed exit strategy as the central bank turns increasingly upbeat towards the economy. As the USDOLLAR consolidates above the 38.2 percent retracement around 10,803, a less dovish tone from the central bank head may produce a higher low in the index, but we may still see a larger correction in the greenback as the FOMC continues to promote its highly accommodative policy stance.

The greenback weakened across the board, led by a 1.42 percent decline in the Australian dollar, which was followed by a 0.58 percent decline in the Euro. Indeed, the near-term rebound in the EURUSD may spark a test of the June high (1.3415) as the European Central Bank (ECB) continues to see the euro-area returning to growth later this year, but the Governing Council remains poised to further embark on its easing cycle in an effort to encourage lending to small and medium-sized enterprises. In turn, we may see the EURUSD remain capped by the 1.3200 handle, and the single currency remains poised to face additional headwinds over the near-term as the region remains mired in recession.