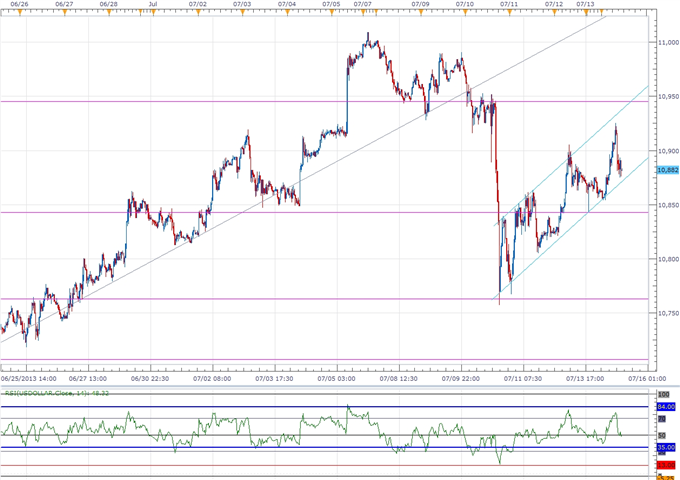 Although the Dow Jones-FXCM U.S. Dollar Index (Ticker: USDollar) remains 0.07 percent higher from the open, the greenback may continue to give back the advance to 10,926 as U.S. Retail Sales increased 0.4 percent in June amid forecasts for a 0.8 percent print, but the downside appears to be limited as the greenback retains the upward trending channel from earlier this month. As the USDOLLAR bounces back ahead of trendline support, we may see a more meaningful run at the 100 percent Fibonacci expansion around 10,945, and the bullish sentiment surrounding the greenback may gather pace over the near to medium-term amid the growing discussion at the Federal Reserve to taper the asset-purchase program. With the slew of key event risks on tap for later this week, the fundamental developments coming out of the U.S. economy may warrant further U.S. dollar strength should the data increase the Fed’s scope to taper its asset-purchase program. 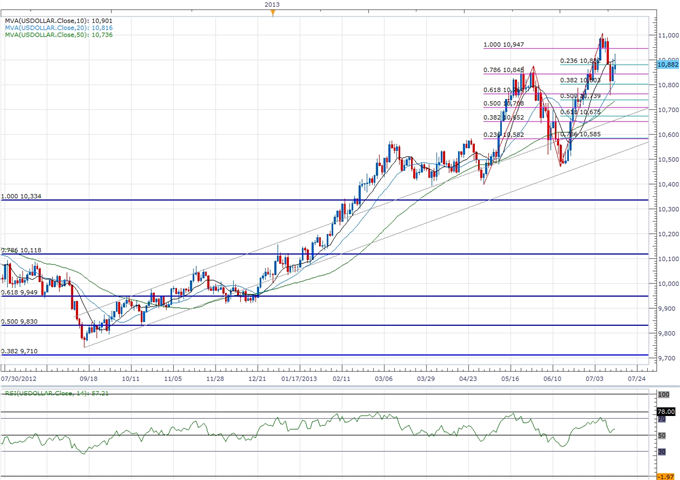 Although we anticipate the Fed’s Beige Book to highlight an improved outlook for the U.S., the Humphrey-Hawkins testimony with Chairman Ben Bernanke highlights the biggest event risk for the greenback as market participants weigh the outlook for monetary policy. Indeed, the fresh batch of central bank rhetoric may heighten the appeal of the USD should the central bank head show a greater willingness to slowly move away from the easing cycle, but we’re looking for a larger correction over the near-term as it carves out a higher high in July. In turn, we may see the greenback continue to give back the rebound off of the 61.8 percent expansion around 10,764, and we will look for a higher low in the coming days as the relative strength index continues to come off of overbought territory.

Three of the four components weakened against the greenback, led by a 0.68 percent decline in the Japanese Yen, while the Australian dollar bucked the trend as China’s 2Q GDP report raised the growth outlook for the $1T economy. However, the Reserve Bank of Australia (RBA) Minutes due out later tonight may dampen the appeal of the higher-yielding currency as the central bank remains poised to further embark on its easing cycle, and the AUDUSD may continue to threaten the 0.9000 handle should the board show a greater willingness to push the benchmark interest rate to a fresh record-low. Nevertheless, as the DailyFX Speculative Sentiment Index currently stands at 3.63, we may see a further decline in the AUDUSD before seeing a more meaningful correction in the exchange rate, and we will maintain a bearish outlook for the Australian dollar as it maintains the downward trend dating back to 2011.