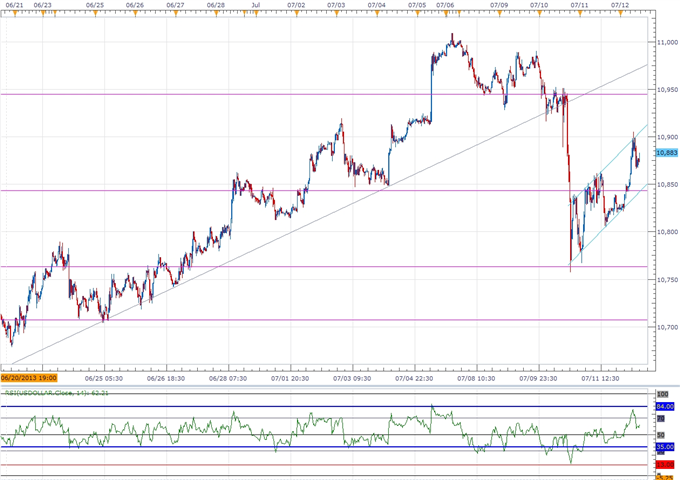 The Dow Jones-FXCM U.S. Dollar Index (Ticker: USDollar) remains 0.61 percent higher from the open even though the U. of Michigan Confidence survey fell short of market expectations, and the near-term correction may continue to take shape in the week ahead should Fed Chairman Ben Bernanke show a greater willingness to retain the highly accommodative policy stance throughout the summer months. Although we’re expecting to see a slew of positive data coming out of the U.S. economy, the Humphrey-Hawkins testimony with Mr. Bernanke certainly highlights the biggest event risk for the following week, and we may see further dollar weakness over the near-term should the central bank head strike a more dovish tone for monetary policy. As the 30-minute relative strength index falls back from overbought territory, we may have an opportunity to take advantage of the bearish flag formation in the days ahead, and we may see another run at the 61.8 percent Fibonacci expansion around 10,763 should the dollar fail to maintain the upward trending channel from earlier this week. 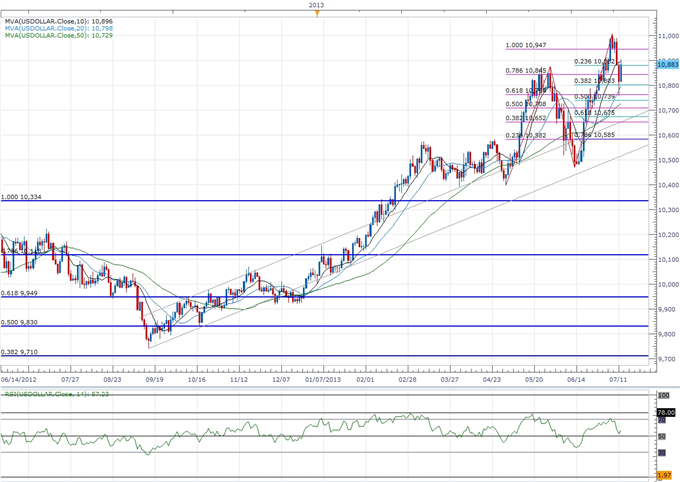 As tapering the asset-purchase program becomes a growing discussion at the Federal Reserve, the House Financial Services Committee and the Senate Banking Committee may press Mr. Bernanke to lay out a more detailed exit strategy, and the fresh batch of central bank rhetoric may set the tone for the July 31 interest rate decision as we see a growing number of Fed officials turn increasingly upbeat towards the economy. At the same time, the Fed’s Beige Book may highlight an improved outlook for growth and inflation as the central bank anticipates a stronger recovery in the second-half of the year, and the fundamentals behind the USD may produce a very shallow correction in the index as the central bank faces diminishing arguments to preserve its highly accommodative policy stance. In turn, USD price action may be heavily driven by the major event risks on tap for next week, and a slew of positive developments coming out of the U.S. should help to limit the downside risk for the greenback as it raises the Fed’s scope to scale back on quantitative easing.

The greenback rallied across the board, led by a 1.47 percent decline in the Australian dollar, and the higher-yielding currency may come under increased pressure next week should China’s 2Q GDP report disappoint. Although the world’s second-largest economy is expected to expand an annualized 7.5 percent, Chinese Finance Minister Lou Jiwei warned that growth may fall below 7 percent as the new government moves towards a more consumer-based economy, and the threat of a ‘hard-landing’ may continue to drag on the AUDUSD as China remains Australia’s largest trading partner. In turn, the Reserve Bank of Australia (RBA) Minutes may highlight a greater willingness to further embark on its easing cycle, and Governor Glenn Stevens may push the benchmark interest rate to a fresh record-low at the August 6 meeting in order to encourage a stronger recovery.