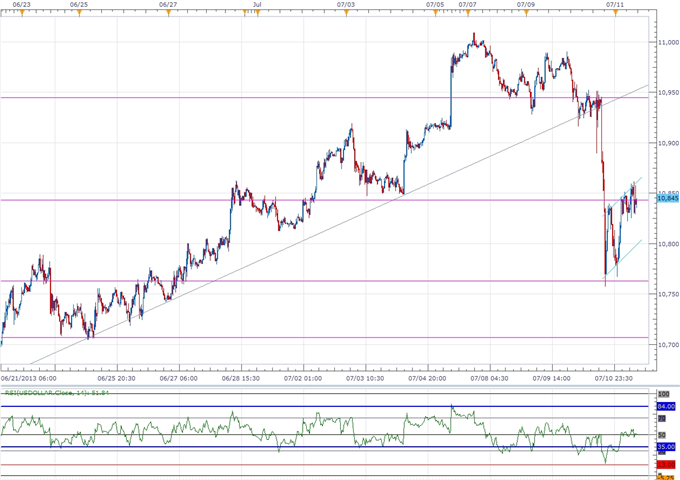 Although the Dow Jones-FXCM U.S. Dollar Index (Ticker: USDollar) is paring the decline to 10,768, a bearish flag appears to be taking shape as Fed Chairman Ben Bernanke strikes a rather dovish tone for monetary policy. In turn, the reserve currency may face additional headwinds ahead of the next FOMC interest rate decision on July 31, and the greenback looks poised for a larger correction as market participants scale back bets of seeing the central bank taper its asset purchase program during the summer months. In turn, we may see the USDOLLAR make another run at the 61.8 percent Fibonacci retracement around 10,763, but we will wait for a higher low to take shape before looking to buy dips in the greenback. 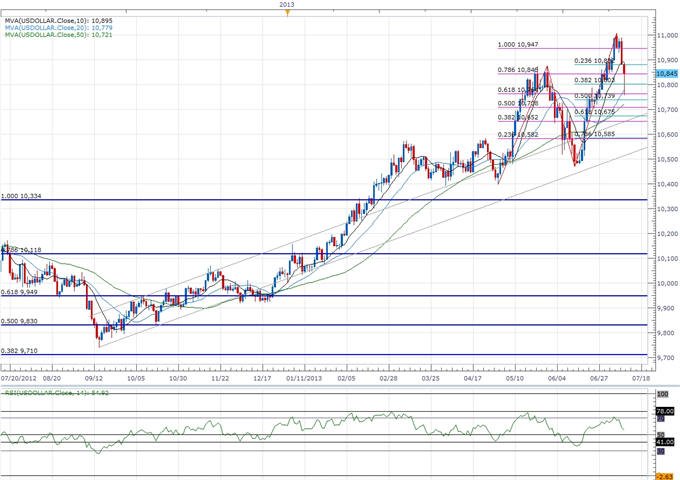 Although Chairman Bernanke saw scope for additional monetary support, it seems as though the central bank head made an attempt to further differentiate the difference between tapering its easing cycle and normalizing monetary policy, but the FOMC remains poised to scale back on quantitative easing later this year as the committee anticipates a stronger recovery in the second-half of 2013. As a result, we will remain a bullish outlook for the USD on a longer-term scale, but we will continue to look for a higher low over the near-term as the fresh batch of central bank rhetoric triggers a correction in the index. Although the dollar bounced back from the 61.8 percent Fib around 10,764, we may see a move back towards the 23.6 percent expansion around 10,582 as it coincides with the 78.6 percent retracement, and would constitute a higher low for the greenback.

Three of the four components strengthened against the dollar, led by a 0.87 percent rally in the Japanese Yen, while the Australian dollar bucked the trend, with the higher-yielding currency down 0.35 percent on the day. Although the headline reading for Australia employment exceeded market expectations, it seems as though the region is struggling to convert temporary jobs into full-time positions, and it seems as though the Reserve Bank of Australia (RBA) will further embark on its easing cycle over the coming months in an effort to stem the downside risks for growth and inflation. According to Credit Suisse overnight index swaps, market participants are pricing at least a 25bp rate cut from the RBA over the next 12-months, and we may see Governor Glenn Stevens push the benchmark interest rate to a fresh record-low as China – Australia’s largest trading partner – remains a risk for a ‘hard-landing.’ Although the AUDUSD remains poised for a sharp rebound, we may see a limited correction as interest rate expectations deteriorate, and we should see the Australian dollar preserve the downward trend dating back to 2011 as the fundamental outlook for the $1T economy deteriorates.