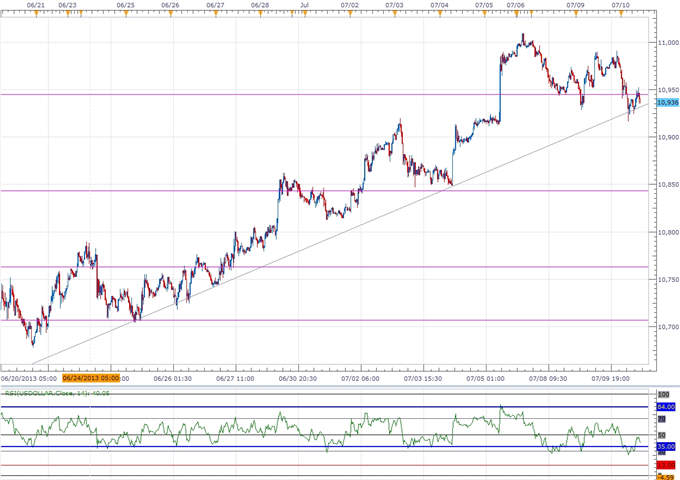 Although the Dow Jones-FXCM U.S. Dollar Index (Ticker: USDollar) remains 0.35 percent lower from the open, we may see a more meaningful rebound in the greenback as the 30-minute relative strength index bounces back from oversold territory. In turn, the dollar may continue to come off of trendline support, and we may see the reserve currency carve a fresh high should the Federal Open Market Committee (FOMC) Minutes show a greater willingness to taper the asset-purchase program. At the same time, we may get a fresh batch of central bank rhetoric as Fed Chairman Ben Bernanke is scheduled to speak on monetary policy at 16:10 ET, and we may see the bullish trend continue to take shape amid the shift in the policy outlook. 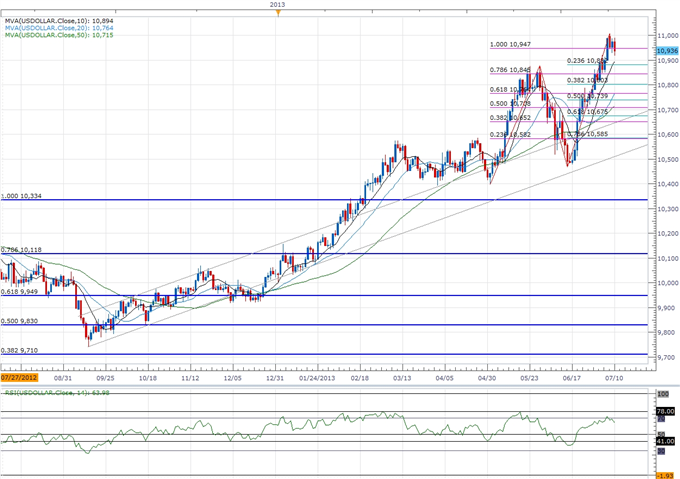 As we see a growing discussion at the FOMC to scale back on quantitative easing, any new developments surrounding the central bank’s exit strategy could serve as the fundamental catalyst to spark further USD strength, and we may see a growing number of Fed officials adopt a more hawkish tone for monetary policy as they anticipate a stronger recovery in the second-half of the year. As a result, we may see the dollar carve another higher high on the back of the FOMC Minutes, but we will look for a larger correction to the downside as the relative strength index falls back from a high of 71. In turn, we may see a higher low take shape ahead of the next Fed interest rate decision on July 31, and the bullish sentiment surrounding the reserve currency should gather pace throughout the second-half of the year as the central bank appears to be slowly moving away from its easing cycle.

Three of the four components rallied against the greenback, led by a 0.88 percent advance in the Japanese Yen, and the low-yielding currency may continue to appreciate against its U.S. counterpart should the Bank of Japan (BoJ) strike a more neutral tone for monetary policy. Indeed, the BoJ is widely expected to retain its current policy in July amid the mixed commentary coming out of the central bank, and we may see a more broad-based correction in the Yen should the board highlight an improved outlook for the world’s third-largest economy. Should we see a growing argument to retain a wait-and-see approach, easing bets for more QE should spark a larger decline in the USDJPY, but we will look for a higher low in the exchange rate amid the deviation in the policy outlook.