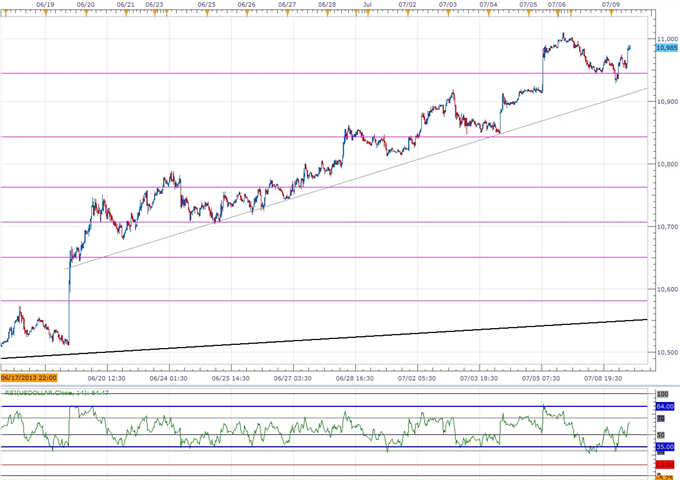 The Dow Jones-FXCM U.S. Dollar Index (Ticker: USDollar) is trading 0.31 percent higher from the open after the International Monetary Fund (IMF) cut its growth forecast for the global economy, and the shift in market sentiment may continue to prop up the reserve currency as it benefits from safe-haven flows. Indeed, the dollar may continue to carve fresh highs as the upward trend continues to take shape, but we may see a short-term correction ahead of the Federal Open Market Committee (FOMC) Minutes as the 30-minute relative strength index approaches overbought territory. Nevertheless, the greenback remains poised for a larger correction as it appears to be forming a higher high in July, and we will continue to look for opportunities to buy into the dollar amid the growing discussion at the Fed to taper the asset-purchase program. 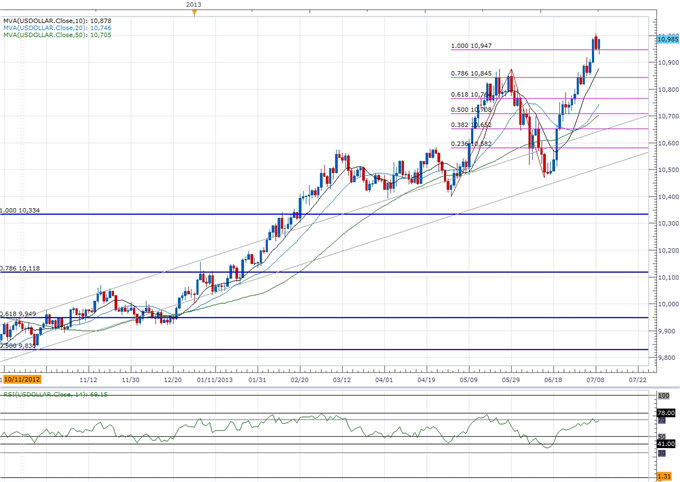 Indeed, the FOMC Minutes may produce a bullish reaction in the USD as a growing number of central bank officials turn increasingly upbeat towards the economy, and the committee looks poised to switch gears later this year as they anticipate a stronger recovery in the second-half of 2013. At the same time, the Fed may lay out a more detailed exit strategy this time around as the recovery gradually gathers pace, and we should continue to see a series of higher highs paired with higher lows in the USDOLLAR amid the shift in the policy outlook. Moreover, we will keep a close eye on the RSI as the oscillator pushes back into overbought territory, and the bullish sentiment surrounding the greenback should gather pace in the second-half as the central bank appears to be slowly moving away from its easing cycle.

Three of the four components weakened against the greenback, led by a 0.77 decline in the British Pound, while the Euro lost 0.75 percent as the European Central Bank (ECB) continued to strike a dovish tone for monetary policy. Indeed, Governing Council Member Joerg Asmussen said the central bank cannot rule out another Long-Term Refinancing Operation (LTRO) amid the ongoing weakness in private sector credit, and went onto say that the forward guidance laid out by ECB President Mario Draghi goes beyond 12-months as the region remains mired in recession. Although we’re seeing the EURUSD hold above the April low (1.2743), we may see a more meaningful move at the 23.6 percent Fibonacci retracement from the 2009 high to the 2010 low around 1.2640-50 amid the weakening outlook for the euro-area, and the single currency remains poised to face additional headwinds over the near to medium-term as the governments operating under the fixed-exchange rate system become increasingly reliant on monetary support.