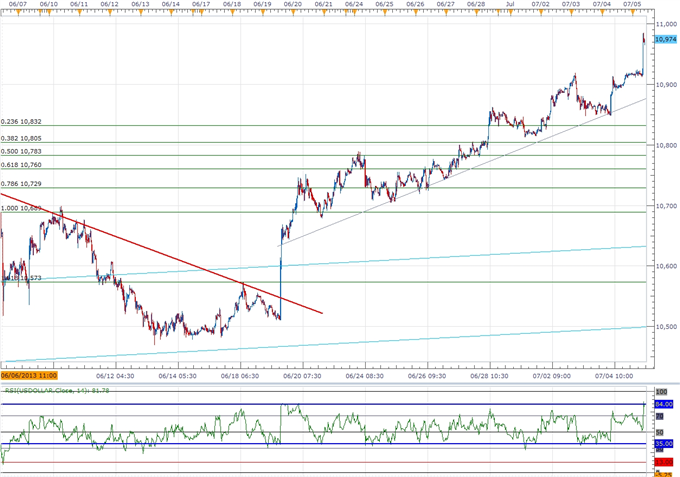 USDOLLAR Continues to Search for Resistance- JPY to Face BoJ

The Dow Jones-FXCM U.S. Dollar Index (Ticker: USDollar) is 0.67 percent higher from the open as U.S. Non-Farm Payrolls increased 195K in June amid forecasts for a 165K print, and the bullish sentiment surrounding the reserve currency should gather pace over the near to medium-term as the data adds to the argument for the FOMC to start tapering its asset-purchase program. Nevertheless, the dollar may face a short-term pullback following the European close as the 30-minute relative strength index falls back from resistance (84), but we should see the upward trend continue to take shape as the fundamental outlook for the world’s largest economy improves. In turn, we will continue to buy dips in the greenback, and we may see the reserve currency mark fresh highs in the week ahead should a growing number of Fed officials adopt a more hawkish tone for monetary policy. 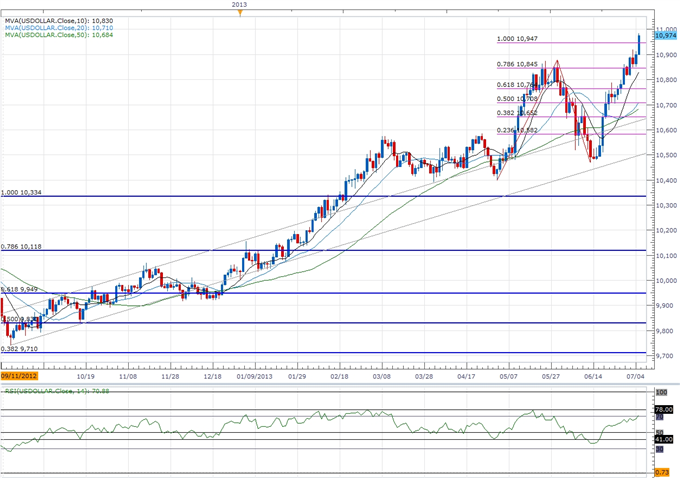 As a slew of Fed policy members are scheduled to speak next week, we may get further details on the central bank’s exit strategy, and the central bank remains poised to slowly move away from its easing cycle as the economic recovery gradually gathers pace. Beyond the headline print for NFPs, the wage growth figure showed the largest expansion since July 2011, and heightening price pressures in the U.S. should further limit the Fed’s scope to retain its highly accommodative policy stance as the outlook for growth and inflation picks up. Although the USDOLLAR managed to clear the 100.0 percent Fibonacci expansion around 10,845, a more meaningful correction may take shape in the coming days as the relative strength index comes up against overbought territory, and we should see the greenback continue to carve a series of higher highs paired with higher lows amid the shift in the policy outlook.

The greenback rallied across the board, led by a 1.17 percent decline in the British Pound, while the Japanese Yen shed 0.77 percent, which pushed the USDJPY back above the 101.00 handle. Indeed, the low-yielding currency may face further headwinds next week as the Bank of Japan is scheduled to announce its latest interest rate decision on July 11, but Governor Haruhiko Kuroda may struggle to push throughout more non-standard measures as there appears to be a growing rift within the central bank. In turn, we may see the BoJ may stick to the sidelines once again, which may help produce a near-term correction in the USDJPY, but we should see the board continue to embark on its easing cycle in the second-half of the year in order to achieve the 2 percent target for inflation.