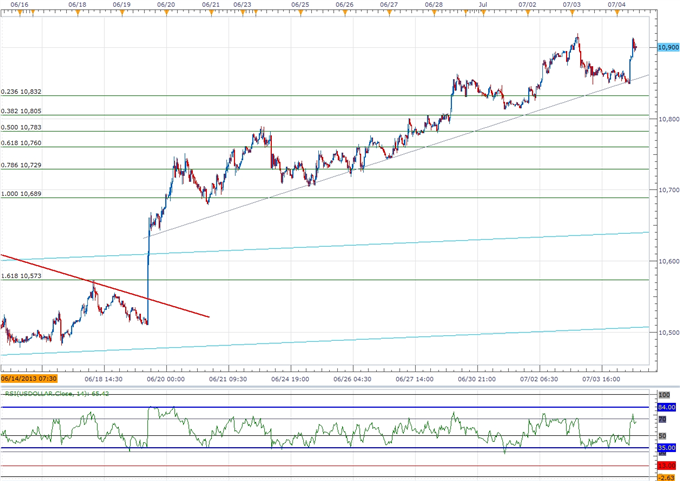 The Dow Jones-FXCM U.S. Dollar Index (Ticker: USDollar) added another 0.35 percent as the Bank of England (BoE) and European Central Bank (ECB) laid out forward-guidance for monetary policy, and the greenback may appreciate further in the coming days as the upward trend carried over from the previous month continues to take shape. However, the dollar looks poised for a pullback as the 30-minute relative strength index falls back from a high of 76, and we may see the reserve currency continue to carve a series of higher lows paired with higher highs amid the shift in the policy outlook. In turn, we will continue to look for opportunities to buy dips in the dollar, and the bullish sentiment may gather pace over the remainder of the week should the developments coming out of the world’s largest economy instill an improved outlook for growth. 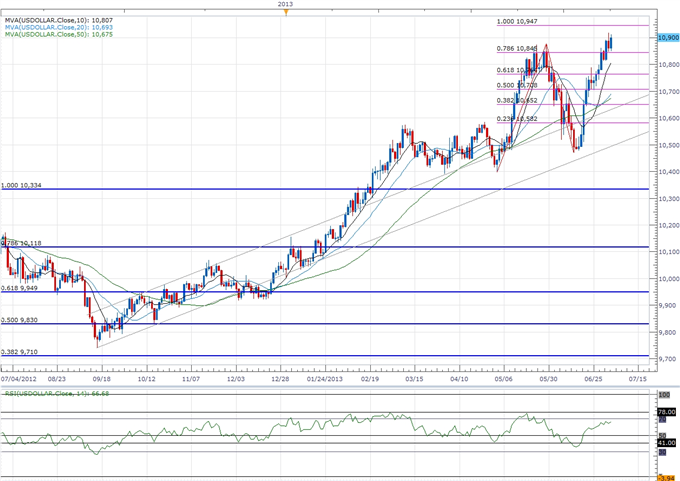 As the USDOLLAR appears to be finding interim support around the 78.6 percent Fibonacci expansion around 10,845, another 165K rise in U.S. Non-Farm Payrolls may produce a more meaningful run at the 100.0 percent Fib (10,947), and we may see a growing number of Fed officials show a greater willingness to taper the asset-purchase program as the jobless rate is expected to narrow to an annualized 7.5 percent from 7.6 percent in May. In turn, we may see the FOMC switch gears later this year, and the committee may sound more upbeat in the coming months as the central bank anticipates a stronger recovery in the second-half of the year. As the USDOLLAR continues to carve a higher high in July, we may see a more meaningful correction ahead of the next FOMC interest rate decision on July 31, but the dollar may face limited moves to the downside as the central bank appears to be slowly moving away from its easing cycle.

Indeed, three of the four components weakened against the greenback, led by a 1.41 percent decline in the British Pound, while the Australian dollar bucked the trend, with the higher yielding currency continuing to come off the 2013 low (0.9034). As the appears to be a bullish divergence in the relative strength index, the rebound in the AUDUSD may turn into a more meaningful correction in the days ahead, but we will continue to sell rallies in the aussie-dollar as the Reserve Bank of Australia (RBA) remains poised to further embark on its easing cycle. In turn, we should see the downward trend dating back to 2011 continue to take shape, and we will look for a lower high in the exchange rate as it appears to be building a short-term base in July.