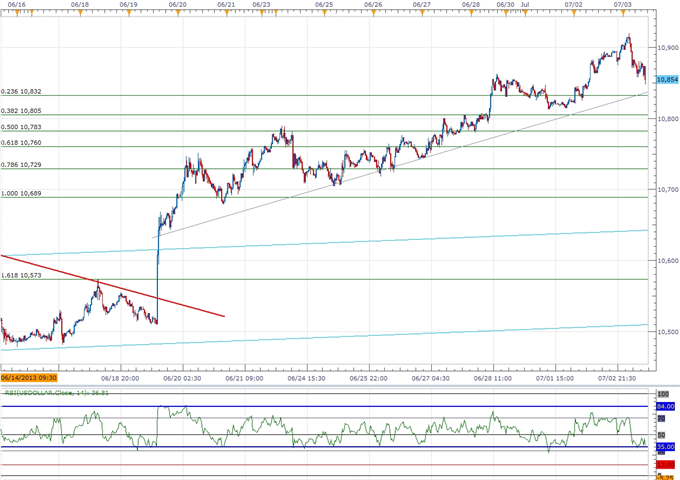 Despite the 188K uptick in the ADP Employment report, the Dow Jones-FXCM U.S. Dollar Index (Ticker: USDollar) is trading 0.31 percent lower as the ISM Non-Manufacturing survey missed market expectations, and the greenback may continue to consolidate ahead of the highly anticipated Non-Farm Payrolls report due out on Friday amid the slew of mixed data. However, we should see a limited decline as the 30-minute relative strength index bounces back ahead of oversold territory, and the dollar may continue to mark fresh highs in the coming days should the NFP report further dampen the Fed’s scope to retain its highly accommodative policy stance. Nevertheless, the market holiday in the U.S. may produce whipsaw-like price action over the next 24-hours of trading, and the dollar may chop around going into the end of the week as market participation falters. 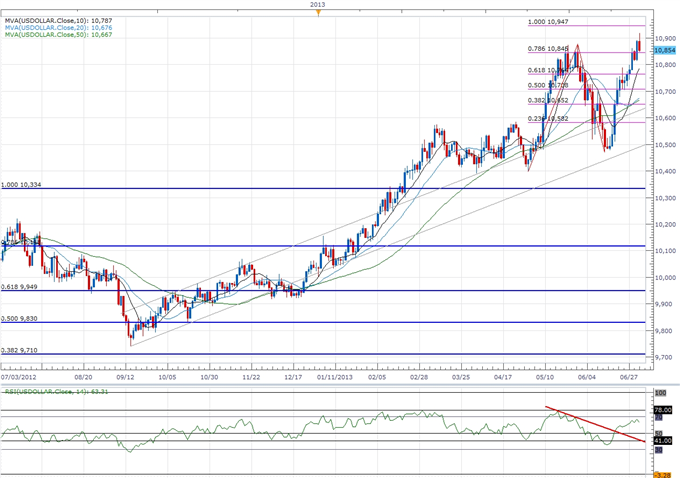 As the USDOLLAR marks a higher high in July, the greenback looks poised for a near-term correction, and we will keep a close eye on the relative strength index as it appears to be turning over ahead of overbought territory. However, we may see a more meaningful run at the 100.0 percent Fibonacci expansion around 10,947 amid the growing arguments to taper the Fed’s asset-purchase program, and we may see a bounce off of the 78.6 percent Fib around 10,845 as the bullish trend continues to take shape. In turn, we will continue to look for opportunities to buy dips in dollar, and we should see the reserve currency continue to mark fresh highs over the near to medium-term amid the shift in the policy outlook.

Three of the four components strengthened against the greenback, led by a 0.89 percent advance in the Japanese Yen, and the low-yielding currency may continue to strengthen against its U.S. counterpart as the Bank of Japan’s (BoJ) easing cycle comes under increased scrutiny. As the BoJ assesses its impact on the real economy, Liberal Democratic Party Secretary General Shigeru Ishiba argued that the central bank cannot provide monetary support indefinitely, but we may see Prime Minister Shinzo Abe put increased pressure on Governor Haruhiko Kuroda to further support the ailing economy in an effort to achieve the 2 percent target for inflation. In turn, we may see the USDJPY trade within a broad range ahead of the next BoJ meeting on July 11, but we should see the bullish trend continue to take shape amid the deviation in the policy outlook.