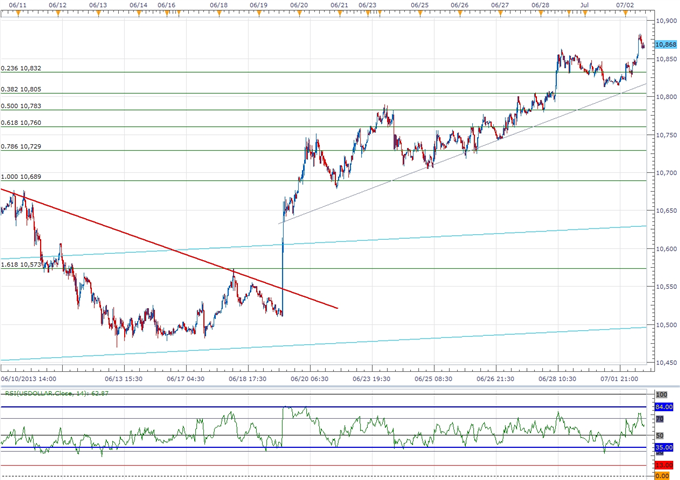 USDOLLAR Eyes 10,900 Ahead of NFPs- AUD Correction on Tap

The Dow Jones-FXCM U.S. Dollar Index (Ticker: USDollar) is trading 0.44 percent higher from the open amid the negative headlines surrounding the euro-area, and the shift in market sentiment may continue to prop up the greenback as Greece struggles to secure its next bailout payment. In turn, the upward trend should continue to take shape in the coming days, and the reserve currency remains poised to make a more meaningful run at the 10,900 handle as it benefits from safe-haven flows. Nevertheless, we may see a move back towards the 23.6 percent Fibonacci retracement as the 30-minute relative strength index falls back from overbought territory, but we will maintain our game plan to buy dips in the greenback amid the growing discussion at the Federal Reserve to taper the asset-purchase program. 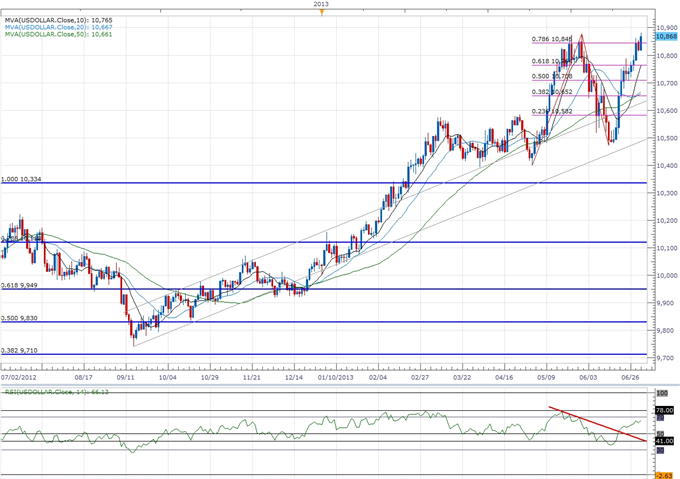 Although the near-term rally appears to be taping off ahead of 10,900, the USDOLLAR did mark a higher high in July, and we will keep a close eye on the relative strength index as it approaches overbought territory. As New York Fed President William Dudley is scheduled to speak at 16:30 GMT, further arguments to scale back on quantitative easing should heighten the appeal of the USD, and the FOMC voting member may highlight an improved outlook for the world’s largest economy as the recovery gradually gathers pace. As a result, the dollar may continue to gain ground ahead of the highly anticipated Non-Farm Payrolls report due out on Friday, and we may see a growing number of Fed officials drop their dovish tone for monetary policy as the U.S. is expected to add another 165K jobs in June.

The greenback rallied across the board, led by a 0.77 percent decline in the Australian dollar, and the higher-yielding currency may face additional headwinds over the near to medium-term as the Reserve Bank of Australia (RBA) keeps the door open to push the benchmark interest rate to a fresh record-low. According to Credit Suisse overnight index swaps, market participants are pricing at least one more 25bp rate cut in the next 12-months, and the dovish tone help by Governor Glenn Stevens may produce further declines in the exchange rate as the central bank looks to further embark on its easing cycle. However, as relative strength index on the AUDUSD bounces back from oversold territory, it looks as though the pair will preserve the 2013 low (0.9106), and we may see a near-term correction in the exchange rate as there appears to be a bullish divergence in the oscillator.