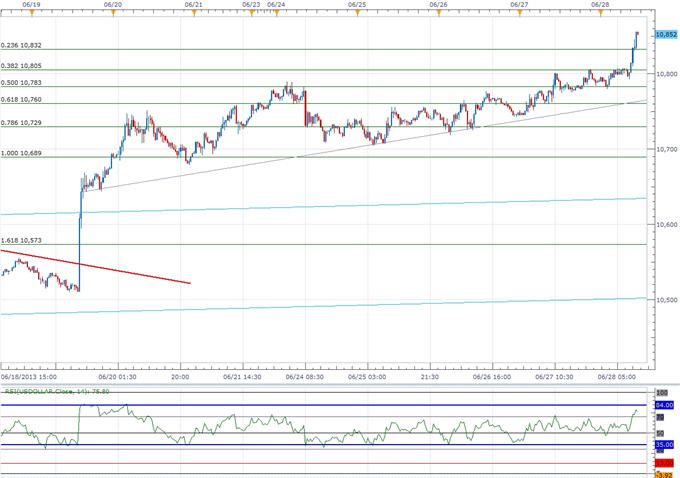 The Dow Jones-FXCM U.S. Dollar Index (Ticker: USDollar) is trading 0.64 percent higher on the last trading day of June as the final reading for the U. of Michigan Confidence survey showed an upward revision to 84.1 from an initial forecast of 82.7, and the bullish sentiment surrounding the greenback should gather pace in the month ahead as the fundamental outlook for the world’s largest economy improves. As the reserve currency clears the 23.6 percent Fibonacci retracement around 10,832, we anticipate a more meaningful move at the 10,900 handle, but we may see a pullback going into to July as the 30-minute relative strength index falls back from a high of 72. Nevertheless, the short-term correction may provide a buying opportunity in the week ahead, and we will retail a bullish outlook for the USD amid the growing discussion to taper the Fed’s asset-purchase program. 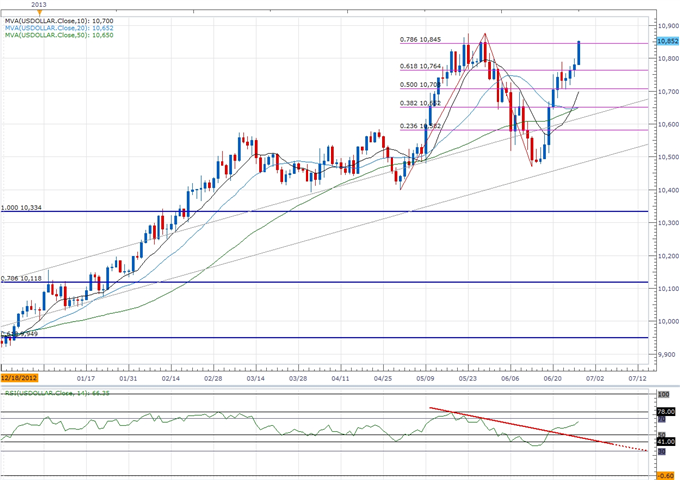 In light of growing arguments to scale back on quantitative easing, Fed Governor Jeremy Stein showed a greater willingness taper the non-standard measure amid the ‘substantial progress’ in the labor market, while Richmond Fed President Jeffery Lacker warned further bond purchases will increase the risk associated with the central bank’s exit strategy as the highly accommodative policy stance fuels risk-taking behavior. As a growing number of Fed officials see scope to start winding down QE, the shift in the policy outlook favors further USDOLLAR strength in the second-half of the year, and we should see the reserve currency continue to carve a series of higher highs paired with higher lows as the fundamental developments coming out of the U.S. economy highlights an improved outlook for growth. However, as market participants turn their attention to the highly anticipated Non-Farm Payrolls report on tap for next week, we may see the greenback consolidate ahead of the key print, and we will keep a close eye on the headline as well as the jobless figure as they’re expected to show further improvements in the labor market.

The greenback rallied across the board, led by a 1.30 percent decline in the Australian dollar, and the higher-yielding currency may face additional headwinds in the week ahead should the Reserve Bank of Australia (RBA) show a greater willingness to ease monetary policy further. Indeed, Governor Glenn Stevens may strike a more dovish tone at the July 2 meeting amid the threat of a banking crisis in China – Australia’s largest trading partner – and the central bank may show a greater willingness to push the benchmark interest rate to a fresh record-low in an effort to further insulate the $1T economy. As the AUDUSD slips to a fresh yearly low of 0.9132, the bearish trend may continue to take shape next month, and the pair may remain limited on the topside as the RBA retains a dovish tone for monetary policy.