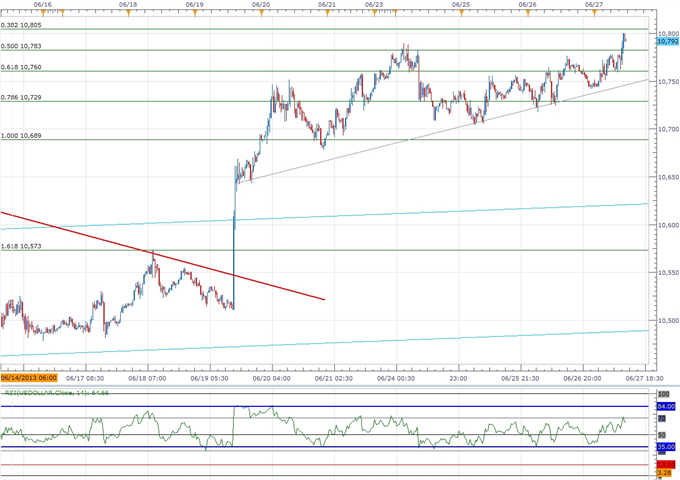 The Dow Jones-FXCM U.S. Dollar Index (Ticker: USDollar) is 0.25 percent higher from the open as Personal Income increased 0.5 percent in May while Pending Home Sales jumped 6.7 percent during the same period, and the greenback may continue to work its way towards the 38.2 percent Fibonacci retracement around 10,805 as the developments raises the Fed’s scope to start tapering the asset-purchase program. As a result, the upward trend from earlier this month should continue to take shape in July, and market participants may turn increased bullish against the USD amid the growing discussion to scale back on quantitative easing. However, as the 30-minute relative strength index approaches overbought territory, we may see a short-term correction over the next 24-hours of trading, and we will look to buy dips in the greenback as the central bank turns increasingly upbeat towards the economy. 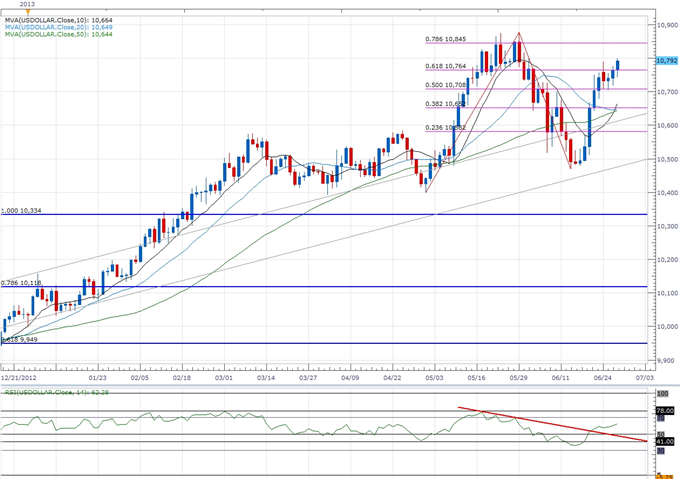 Although New York Fed President William Dudley and Governor Jerome Powell struck a rather neutral tone for monetary policy, the FOMC voting-members continued to highlight an improved outlook for the U.S. economy, and it seems as though the central bank will start to taper its asset-purchase program in the second-half of the year as the recovery gradually gathers pace. As the FOMC appears to be slowly moving away from its easing cycle, we should see further details regarding the exit strategy in the months ahead, and the central bank may find less and less arguments to retain its highly accommodative policy stance as the Fed anticipates a stronger recovery over the remainder of 2013. As the USDOLLAR looks poised to close above the 61.8 percent Fib (10,764), our next target comes in at the 78.6 percent retracement around 10,845, but we may see the dollar make a more meaningful run at the 10,900 handle amid the shift in the policy outlook.

Three of the four components weakened against the greenback, led by a 0.65 percent decline in the Japanese Yen, and the low-yielding currency may face additional headwinds over the next24-hours of trading should Japanese policy makers put increased pressure on the Bank of Japan (BoJ) to implement more measures at the July 11 meeting. Indeed, the headline reading for Japanese inflation is expected to contract another annualized 0.4 percent in May, and a further deterioration in price growth may fuel speculation for additional monetary support as Governor Haruhiko Kuroda maintains his pledge to achieve the 2 percent target for inflation. In turn, we will maintain our game plan to buy dips in the USDJPY and we may see the pair breakout of the range-bound price action from earlier this week should we see further comments calling for more non-standard measures.