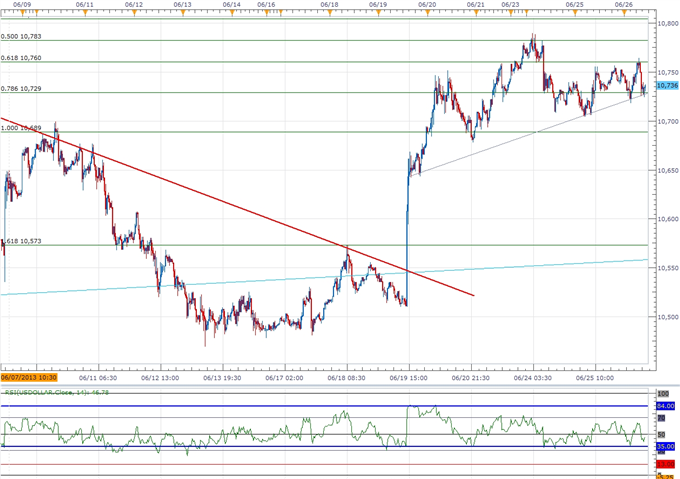 Although the Dow Jones-FXCM U.S. Dollar Index (Ticker: USDollar) is trading 0.08 percent lower from the open, the greenback may carve out a higher high in the coming days as the upward trend from earlier this month continues to take shape. As the 30-minute relative strength index bounces back ahead of interim support (35), we are looking for a move back towards the 61.8 percent Fibonacci retracement around 10,760, and the bullish sentiment surrounding the reserve currency may gather pace in the month ahead should we see a renewed flight to safety. At the same time, despite the downward revision in the final 1Q GDP report, tapering the Fed’s asset-purchase program should be a growing theme in the second-half of the year as the central bank anticipates a stronger recovery over the coming months, and the FOMC may find narrowing arguments to retain its $85 monthly purchases as the recovery gradually gathers pace. 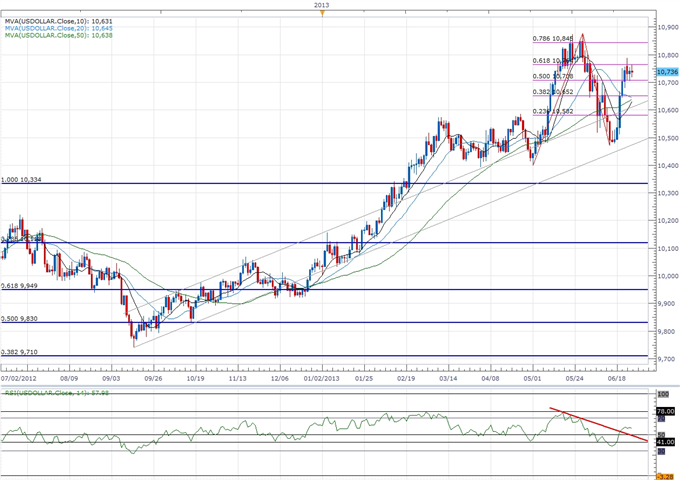 Indeed, Minneapolis Fed President Narayana Kocherlakota argued that monetary policy will remain accommodative even after the FOMC halts its quantitative easing program as the central bank retains a zero-interest rate policy (ZIRP), but went onto say that the board should defend the 2 percent target for inflation as price growth remains subdued. It seems as though the Fed is finding it increasingly difficult to justify its highly accommodative policy as the central bank turns increasingly upbeat towards the economy. In turn, we are waiting to see a close above the 61.8 percent Fib around 10,764 to see a more meaningful move at the 78.6 percent retracement (10,845), and we will continue to look for a higher high amid the shift in the policy outlook.

Two of the four components advanced against the greenback, led by a 0.79 percent advance in the Australian dollar, while the Euro is struggling to hold its ground ahead of the EU Summit, with the EURUSD trading 0.50 percent lower on the day. As European policy makers struggle to meet on common ground, there’s certainly limited scope of seeing a resolution to utilize the European Stability Mechanism (ESM) to directly recapitalize commercial banks, and we may see the EU become increasingly reliant on monetary support as the governments operating under the single currency struggle to get their house in order. Should the EU Summit disappoint, we should see a more meaningful move at the 23.6 percent Fib retracement from the February decline around 1.2970, and the Euro may threaten the upward trend from earlier this year should we see a greater case for the European Central Bank (ECB) to further embark on its easing cycle.