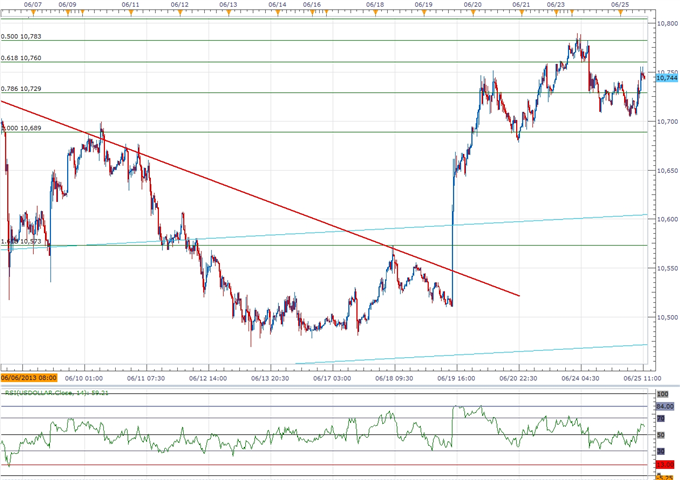 The Dow Jones-FXCM U.S. Dollar Index (Ticker: USDollar) is 0.13 percent higher from the open as the U.S. Durable Goods Orders report topped market expectations, and the rebound in the reserve currency may turn into a larger rally as the fundamental developments coming out of the region furthers the argument to taper the Fed’s asset-purchase program. As the greenback holds above the 10,700 figure, we’re looking for a run at the 61.8 percent Fibonacci retracement around 10,760, and the move would negate any potential of seeing a head-and-shoulders top in the index as it carves out a higher low during the last full-week of June. However, as the 30-minute relative strength index approaches overbought territory, we may see a small correction over the next 24-hours of trading, which could produce a move back towards the 78.6 percent retracement at 10,729. 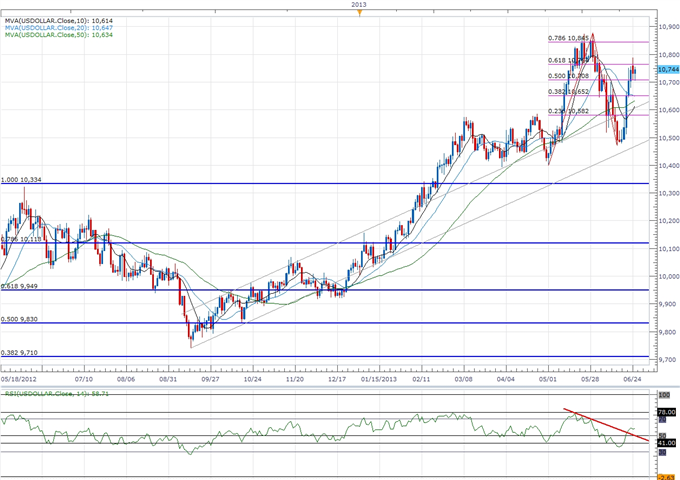 Although Dallas Fed President Richard Fisher and Minneapolis Fed President Narayana Kocherlakota made the case that the FOMC is not exiting from its easing cycle, it seems as though tapering the quantitative easing program will be a growing discussion in the second-half of the year, and we may see a growing number of central bank officials adopt a more neutral to hawkish tone for monetary policy as the economic recovery gradually gathers pace. As the USDOLLAR bounces back from the 50.0 percent Fibonacci expansion (10,780), the lower high carved out earlier this month should ultimately produce a higher high over the near-term, and the dollar looks poised to make a more meaningful run at the 10,900 figure amid the shift in the policy outlook. At the same time, negative headlines coming out of the global economy may continue to drag on market sentiment, and we may see a renewed flight to safety in the coming days as the EU Summit in Brussels comes into focus.

Three of the four components weakened against the greenback, led by a 0.32 percent decline in the Euro, and the single currency may face additional headwinds in the days ahead should we see the group of European policy makers make further attempts to buy more time. As the EU struggles to meet on common ground, the summit scheduled for June 27-28 may do little to shore up investor confidence, and the headlines coming out of Europe may further dampen the appeal of the single currency as the group retains a reactionary approach in addressing the risks surrounding the monetary union. As the governments operating under the fixed-exchange rate system scale back their push for austerity, the European Central Bank (ECB) is likely to come under increased pressure to further embark on its easing cycle, and the prolonged recession may produce further declines in the exchange rate as the Governing Council looks to implement more non-standard measures over the coming months. In turn, we may see the EURUSD fall back towards the 23.6 percent Fib retracement from the February decline around 1.2970, and the pair may threaten the bullish trend from earlier this year amid the deviation in the policy outlook.