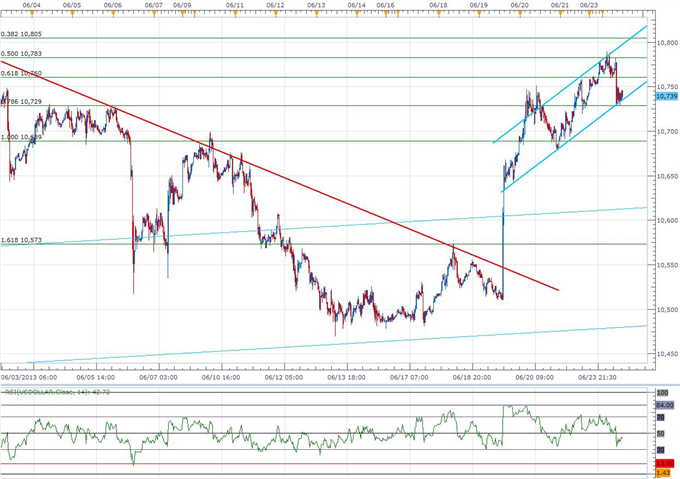 Although the Dow Jones-FXCM U.S. Dollar Index (Ticker: USDollar) is trading marginally lower from the open, we’re seeing the greenback find intraday support around the 78.6 percent Fibonacci retracement around 10,729, and the short-term pullback in the reserve currency may offer a buying opportunity as market sentiment falters. As the 30-minunte relative strength index snaps back ahead of oversold territory, the index appears to be persistently carving a series of higher highs paired with higher lows, and the upward trending channel may continue to take shape in the days ahead as the flight to safety gathers pace. At the same time, the shift in the policy outlook favors a bullish forecast over the near to medium-term, and the bullish momentum may gather pace in the second-half of the year as the Federal Reserve appears to be slowly moving away from its easing cycle. 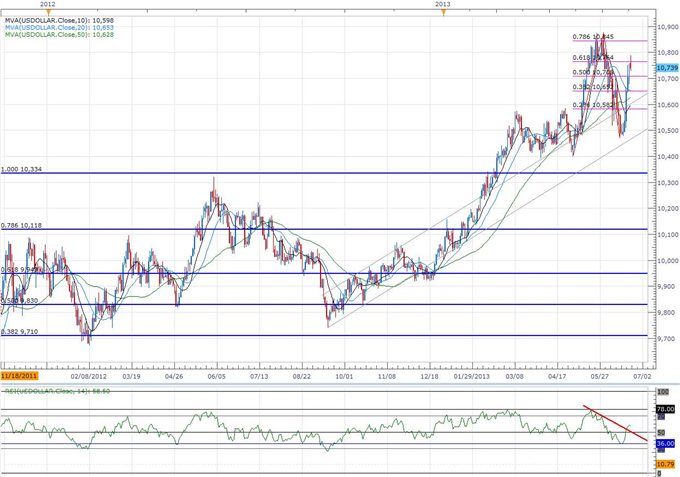 Although New York Fed President William Dudley argued that the central bank ‘was not sufficiently accommodative relative to the state of the economy,’ it seems as though we will see further discussion to taper the asset-purchase program at the July 31 meeting as a growing number of Fed officials turn increasingly upbeat on the economy. The shift in central bank rhetoric should continue to limit the downside risk for the USD, and future comments from the FOMC may highlight a greater willingness to halt its easing cycle in the medium-term as the region gets on a more sustainable path. In turn, our near-term objective remains the 78.6 percent Fib expansion around 10,845, but we may see a more meaningful run at the 10,900 handle should the Fed continue to scale back its willingness to expand the balance sheet further.

Two of the four components advanced against the greenback, led by a 0.30 percent rally in the Japanese Yen, but the Bank of Japan (BoJ) may continue to dampen the appeal of the low-yielding currency as the central bank remains poised to further embark on its easing cycle. Indeed, Deputy Governor Kikuo Iwata reiterated the central bank’s highly dovish tone for monetary policy and said that the board still has options to further address the risks surrounding the region, and the BoJ may expand its balance sheet further in the second-half of the year as the economy continues to face negative price growth. As Japanese consumer prices are projected to contract an annualized 0.4 percent in May, Governor Haruhiko Kuroda may come under increased to pump more liquidity into the system, and the policy outlook continues to warrant a bearish outlook for the Japanese Yen as the central bank retains its aggressive approach to achieve the 2 percent target for inflation.