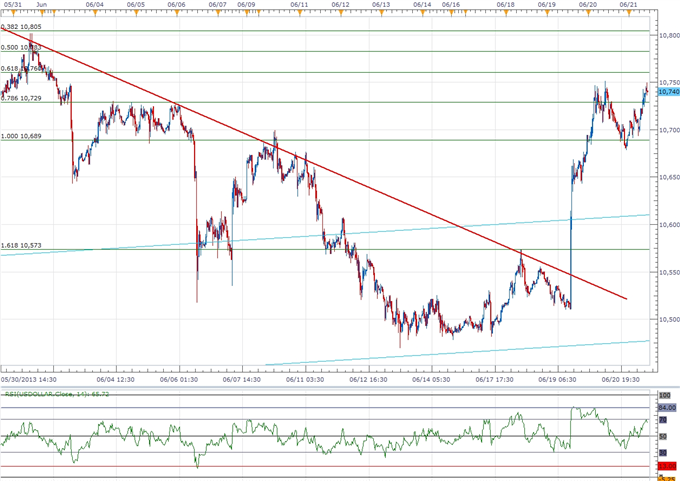 The Dow Jones-FXCM U.S. Dollar Index (Ticker: USDollar) added another 0.33 percent on Friday, and the greenback may persistently retrace the decline from 10,877 as the flight to safety gathers pace. Indeed, the shift in market sentiment may continue to prop up the reserve currency as it benefits from safe-haven flows, but we may see a small correction going into the following week as the 30-minute relative strength index comes up against overbought territory. In turn, we may see a pullback towards the 100 percent Fibonacci expansion around 10,689, but we will look to buy dips in the greenback as the Federal Reserve turns increasingly upbeat towards the economy. As the economic docket for the following week is expected to instill an improved outlook for growth, the bullish sentiment surrounding the greenback may gather pace in the days ahead, and we may see a growing number of Fed officials adopt a more neutral to hawkish tone for monetary policy as the region gets on a more sustainable path. 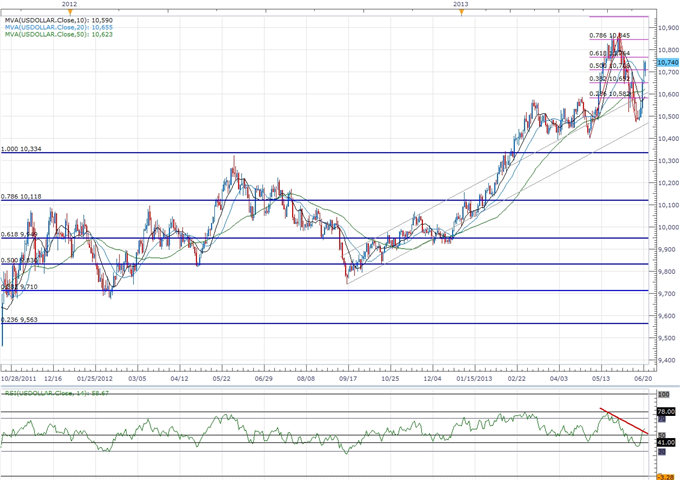 Beyond the data on tap for next week, we have a slew of Fed policy makers scheduled to speak in the days ahead, and the fresh batch of central bank rhetoric may further dampen expectations for additional monetary support should we get further details regarding the FOMC’s exit strategy. As Chairman Ben Bernanke shows a greater willingness to taper the asset-purchase program, the shift in the policy outlook is likely to be a growing theme in the second-half of the year, and we will look for a higher high in the USDOLLAR as the flight to safety gathers pace. In turn, we will look for a more meaningful run at the 10,900 handle as we head into the second-half of the year, and the dollar looks poised to appreciate further in the coming months as the central bank appears to be slowly moving away from its easing cycle.

Three of the four components weakened against the greenback, led by a 0.75 percent decline in the British Pound, while the Australian dollar bucked the trend as the higher-yielding currency added 0.12 percent. Although we’re seeing the relative strength index on the AUDUSD dip into oversold territory, the pair continues to threaten the lower bounds of the descending channel dating back to 2011, and we may see a more meaningful rebound in the days ahead as the aussie-dollar searches for support. However, the AUDUSD remains at risk of carving a fresh low as market sentiment falters, and we will continue to sell rallies in the exchange rate as the policy outlook continues to highlight another rate cut from the Reserve Bank of Australia (RBA). Indeed, Credit Suisse overnight index swaps continue to show expectations for another 25bp rate cut over the next 12-months, and Governor Glenn Stevens may further embark on the easing cycle in the second-half of the year in order to further insulate the $1T economy.