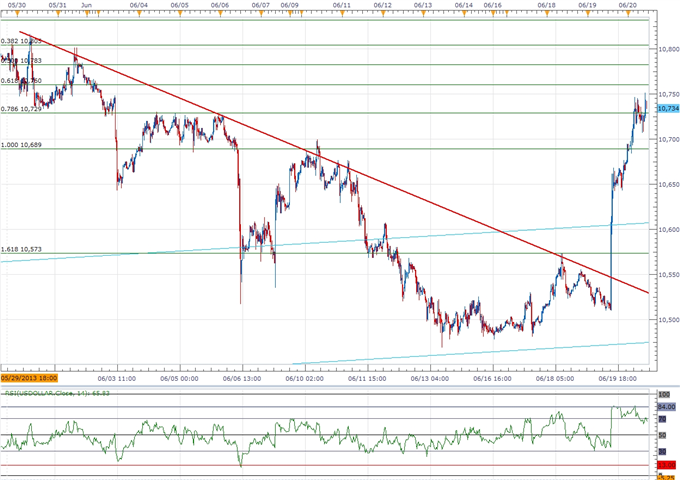 The Dow Jones-FXCM U.S. Dollar Index (Ticker: USDollar) added another 0.76 percent on Thursday as U.S. Existing Home Sales increased 4.2 percent in May to mark the biggest advance since August 2012, and the greenback may track higher over the remainder of the week as fight to safety heightens the appeal of the reserve currency. However, the dollar looks poised for a small pullback as the 30-minute relative strength index continues to find resistance around the 84 figure, and we may see a move back towards the 100 percent Fibonacci expansion around 10,689 as it looks for near-term support, Nevertheless, we should see the dollar continue to retrace the decline carried over from the previous month as it breaks out of the bearish trend, and we will look to buy dips in the greenback amid the shift in market sentiment. 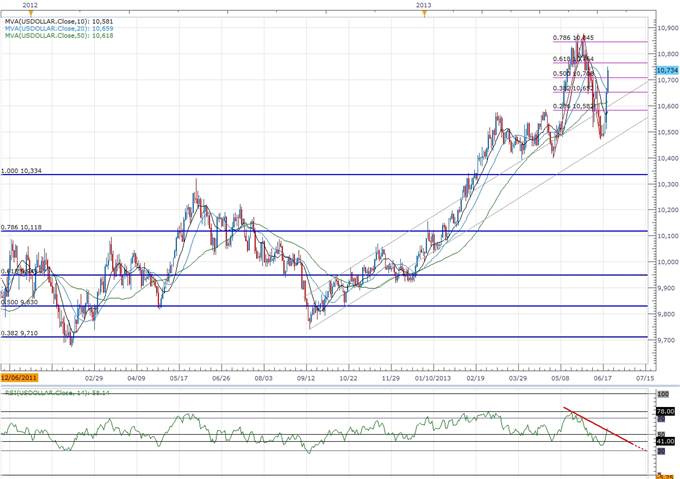 Indeed, the dollar looks poised for a higher high as the relative strength index appears to be breaking out of the bearish trend, and the flight to safety may gather pace over the remainder of the week as headlines coming out of China fuel fears of a banking crisis. In turn, the rise in safe-haven flows should produce further USD strength over the near to medium-term, but the lack of momentum to clear the 61.8 percent expansion around 10,764 may produce a move back towards former resistance – the 50.0 percent Fib around 10,652. Still, we will retain a bullish outlook for the reserve currency as it carves out a higher low in June, and the shift in the policy outlook along with the drop in risk appetite should foster greater demands for the USDOLLAR as the fundamental outlook for the world’s largest economy improves.

The greenback rallied across the board, led by a 1.60 percent decline in the Japanese Yen, and the USDJPY looks poised to resume the upward trend from earlier this year as it carves out a higher low around 93.77. As the Bank of Japan (BoJ) remains poised to further embark on its easing cycle in the second-half of the year, the deviation in the policy outlook warrants further upside for the dollar-yen, and we should see a more meaningful run at the 104.00 handle as the Fed Chairman Ben Bernanke sees scope to taper the asset-purchase program in the coming months. In turn, we maintain our game plan to buy dips in the USDJPY, and the policy outlook should continue to serve as a key driver of price action for the dollar-yen as BoJ Governor Haruhiko Kuroda maintains his pledge to achieve the 2 percent target for inflation.