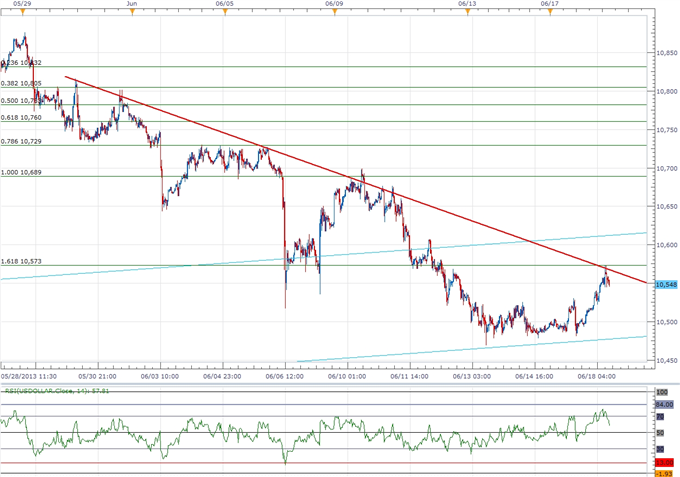 Despite the mixed batch of data coming out of the world’s largest economy, the Dow Jones-FXCM U.S. Dollar Index (Ticker: USDollar) is trading 0.22 percent higher from the open, and greenback may appreciate further over the next 24-hours of trading should the Federal Reserve show a greater willingness to taper its asset-purchase program in the second-half of the year. Although the greenback appears to be finding intraday resistance around the 1.618 Fibonacci extension (10,573) from the April decline, we’re seeing the index threaten the downward trend from earlier this this month, and the dollar looks poised to breakout to the upside as it carves out a higher low in June. In turn, we should see the dollar resume the upward trend from earlier this year, and the bullish sentiment surrounding the greenback may gather pace over the near to medium-term amid the shift in the policy outlook. 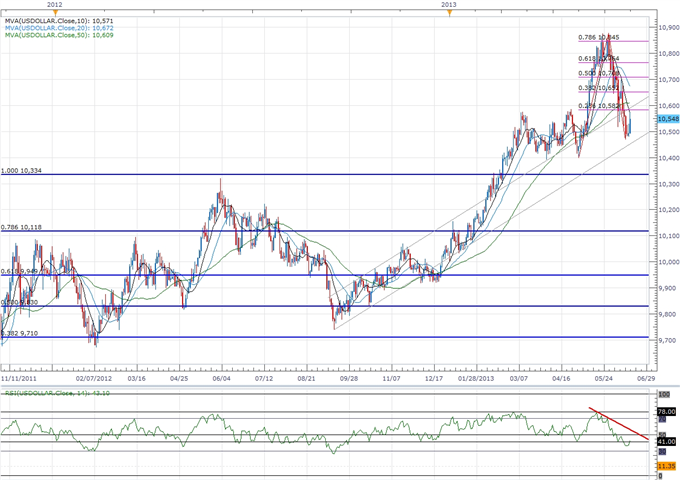 As the USDOLLAR builds a short-term base, the rebound from 10,469 should produce a higher high in the index, and we may see a more meaningful run at the 10,900 handle should we see a growing number of Fed officials adopt a more neutral to hawkish tone for monetary policy. Beyond the updated forecast, the FOMC may lay out a more detailed exit strategy as the U.S. economy gets on a more sustainable path, and the committee may see scope to halt its easing cycle towards the end of the year as the recovery gradually gathers pace. In turn, the near-term rebound should turn into a larger advance following a more upbeat Fed, and we will look for a higher high as the bullish trend continues to take shape.

The greenback strengthened against three of the four components, led by a 1.07 percent decline in the Japanese Yen, and the USDJPY continue to retrace the decline carried over from the previous month amid the deviation in the policy outlook. Indeed, the FOMC rate decision may serve as the fundamental catalyst to spark a sharp rally in the dollar-yen as the Bank of Japan (BoJ) looks to further embark on its easing cycle in the second-half of the year. As Japanese policy makers press the BoJ to implement more non-standard measures, Governor Haruhiko Kuroda may take further steps at the July 11 meeting, but there appears to be a growing rift within the board as central bank officials assess the impact on the real economy. Although we’re seeing the BoJ push to the sideline, Governor Kuroda remains poised to ease policy further in order to achieve the 2 percent target for inflation, and the USDJPY could be in for another at the 104.00 region as the Fed appears to be slowly moving away from its easing cycle.