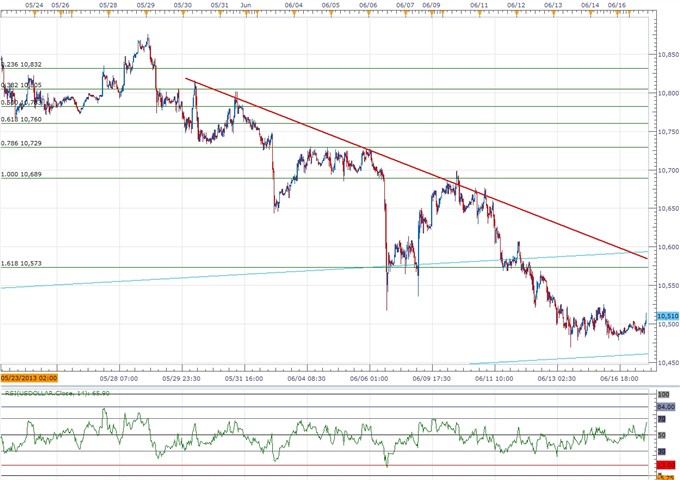 The Dow Jones-FXCM U.S. Dollar Index (Ticker: USDollar) remains 0.22 percent higher from the open after the Empire Manufacturing survey advance to 7.84 in June, while the NAHB Housing Market index climbed to 52 from 44 in May to mark the highest reading since March 2006. As the fundamental outlook for the world’s largest economy improves, the dollar may continue to carve out a higher low ahead of the FOMC interest rate decision on June 19, and the developments coming out of the policy meeting may spur a sharp rally in the greenback should the central bank show a greater willingness to taper its asset-purchase program in the second-half of the year. In turn, speculation surrounding the FOMC may dictate USD price action over the next 24-hours of trading, and we may see the index threaten the downward trend from earlier this month amid the shift in the policy outlook. 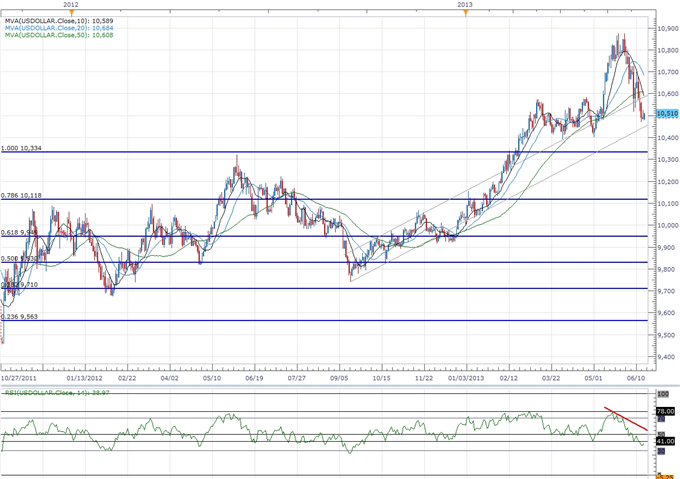 Although the FOMC is widely expected to retain its current policy in June, the updated forecast may highlight an improved outlook for the world’s largest economy, and we may see a greater discussion to taper the asset-purchase program as the region gets on a more sustainable path. As the USDOLLAR carves out a higher low this month, the rebound from 10,469 should gather pace in the coming days, and we may see a more meaningful run at the 10,900 handle as the Fed appears to be slowly moving away from its easing cycle. In turn, we will look for a higher high in the index, and the bullish series should gather pace in the second-half of the year as market participants scale back bets for additional monetary support.

Three of the four components weakened against the greenback, led by a 0.74 percent decline in the Japanese Yen, and the USDJPY looks poised to track higher over the near to medium-term amid the deviation in the policy outlook. As Japanese policy makers put increased pressure on the Bank of Japan (BoJ) to implement more non-standard measures, the low-yielding currency may face additional headwinds ahead of the next interest rate decision on July 11, but we may see the board struggle to meet on common ground as the central bank weighs its impact on the real economy. In turn, the USDJPY may continue to carve a higher low around the 94.00 handle, and we may see another run at the 104.00 region as the BoJ remains poised to further embark on its easing cycle over the coming months.