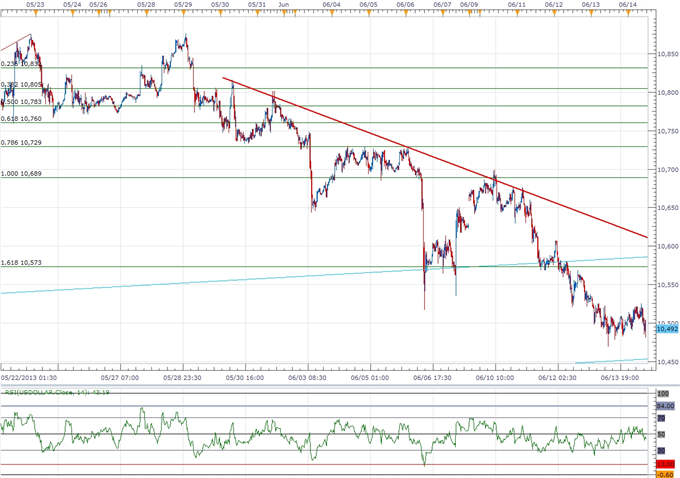 The Dow Jones-FXCM U.S. Dollar Index (Ticker: USDollar) is trading 0.01 percent lower from the open as the U. of Michigan Confidence survey narrowed to 82.7 from 84.5 in May, and the greenback may continue to track lower in the days ahead as it maintains the downward trend from earlier this month. Although we were looking for support around the 10,500 handle, we still anticipate a higher low in the index as it holds above the May low (10,399), and the reserve currency may regain its footing next week as tapering the asset-purchase program becomes a growing discussion at the Federal Reserve. Nevertheless, as market participation thins ahead of the weekend, we may see the dollar hold steady throughout the North American trade, but the updated assessment from the central bank may increase the appeal of the reserve currency should we see a growing number of Fed officials strike an improved outlook for the world’s largest economy. 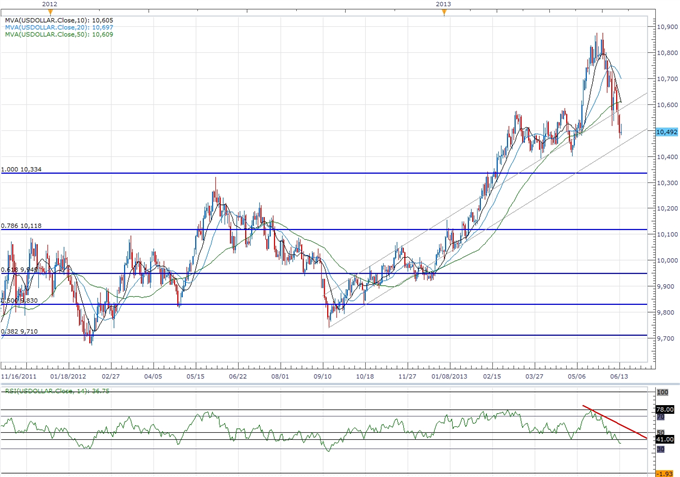 As the daily relative strength index continues to below support (41), the dollar may face further declines ahead of the FOMC interest rate decision, but we may see a growing argument to scale back the quantitative easing program as the region gets on a more sustainable. Although there’s limited scope of seeing the Fed taper its non-standard this month, the central bank may highlight a greater willingness to cut its purchases during the summer, and we should see the committee switch gears later this year as the economic recovery gradually gathers pace. In turn, we should see the dollar resume the bullish trend from earlier this year, and we anticipate a more meaningful run at the 10,900 handle as the dollar continues to carve out a higher low.

Thee of the four components weakened against the greenback, led by a 0.49 percent decline in the Australian dollar, while the Japanese Yen bucked the trend, with the low-yielding currency advancing 1.11 percent against its U.S. counterparts. Indeed, the Bank of Japan (BoJ) Minutes suggests that the central bank will retain a wait-and-see approach at the July 11 meeting as the board struggles to meet on common ground, and we may see Governor Haruhiko Kuroda struggle to push through additional measures for the time being amid the increased volatility across the Japanese financial market. Although the USDJPY appears to be searching for a higher low, we may see the pair continue to retrace the advance from earlier this year as BoJ moves to the sidelines, but the FOMC rate decision may serve as a fundamental catalyst to spur a resumption of the bullish trend as the Fed turns increasingly upbeat towards the economy.