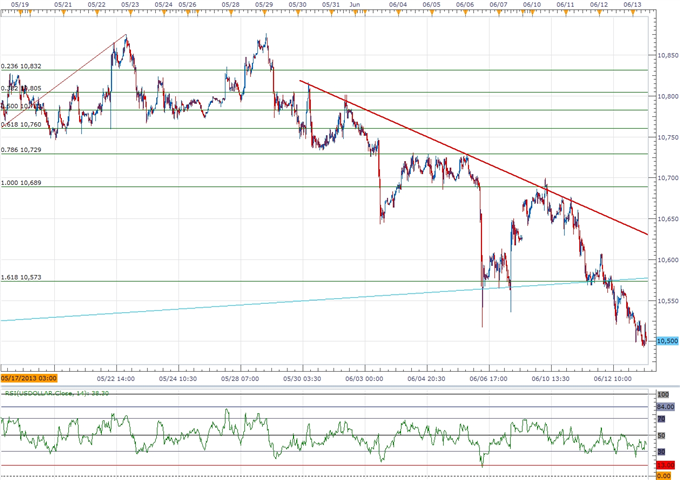 USD Continues to Search for Higher Low Ahead of FOMC Meeting

Although the Dow Jones-FXCM U.S. Dollar Index (Ticker: USDollar) remains 0.45 percent lower from the open, we’re seeing the greenback regain its footing as U.S. Retail Sales climbed 0.6 percent in May. As the reserve currency consolidates around the 10,500 handle, with the 30-minute relative strength index bouncing back from overbought territory, the rebound from 10,494 may gather pace over the remainder of the week, and we may see the dollar threaten the downward trend from earlier this month as market participants turn their attention to the FOMC interest rate decision on June 19. As a result, we may see the dollar continue to pare the decline from earlier this month, and the greenback may outperform in the second-half of the year as the Fed scales back its willingness to ease monetary policy further. 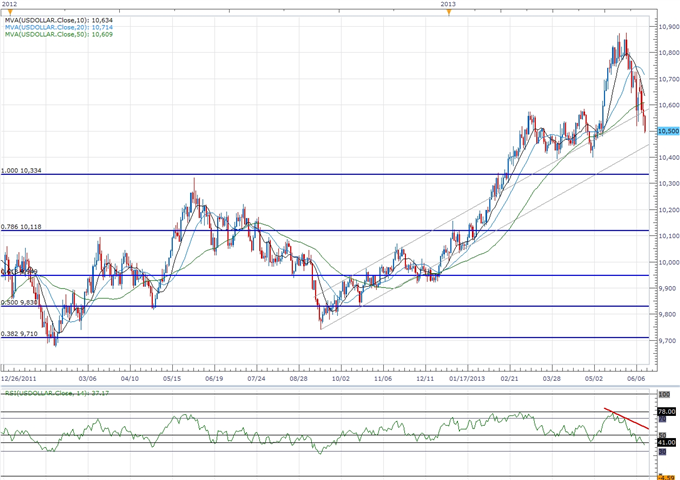 As the Fed is expected to release its updated forecast as well as its interest rate outlook next week, the USDOLLAR appears to be carving out a higher low ahead of the policy meeting, and the reserve currency may resume the bullish trend from earlier this year should the central bank show a greater willingness to taper it’s asset-purchase program. Indeed, we may see a growing number of Fed officials strike an improved outlook for the region amid the resilience in private sector consumption – one of the leading drives of growth – and the central bank may see scope to conclude its easing cycle in the second-half of the year as the outlook for growth and inflation improves. Although the 41 figure on the relative strength index failed to hold up as support, the shift in the policy outlook should limit the downside for the USDOLLAR, and we should see the greenback make a more meaningful run at the 10,900 handle as market participants scale back bets for more quantitative easing.

The greenback continued to weakened across the board, driven by a 1.89 percent rally in the Japanese Yen, and the low-yielding currency may continue to appreciate against its U.S. counterpart as the Bank of Japan (BoJ) sticks to the sidelines. Indeed, it seems as though the BoJ will retain a wait-and-see approach at its next meeting on July 11 as central bank Governor Haruhiko Kuroda anticipates the extreme volatility across the Japanese financial market to gradually cool over time, but the board may come under increased pressure to further embark on its easing cycle later this year as the region continues to face negative price growth. In turn, we may see the USDJPY trade within a broad range over the near-term, and the pair may work its way back towards the 100.00 handle and it comes off of the 38.2 percent Fibonacci retracement from the 2007 high to the 2011 low around 94.00-10.