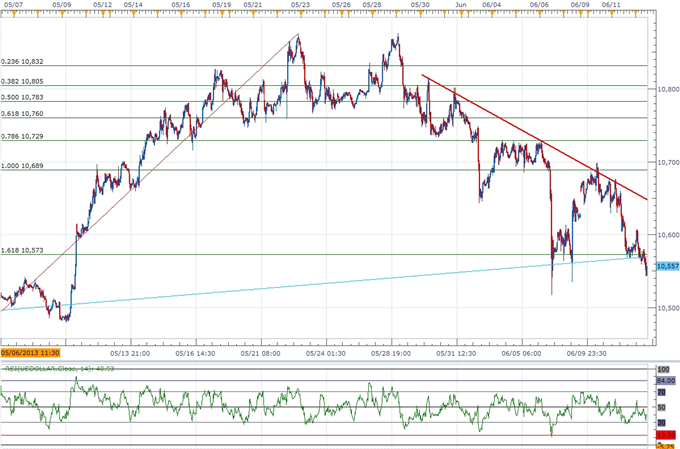 USDOLLAR to Resume Bullish Trend- AUD Rebound to Be Capped

Although the Dow Jones-FXCM U.S. Dollar Index (Ticker: USDollar) is trading 0.24 percent lower from the open, the correction in the reserve currency appears to be coming to an end as it carves a short-term base above the 10,500 handle. In turn, we may see a rebound going into the end of the week, and we will keep a close eye on the as the 30-minute relative strength index as it comes up against oversold territory. As the dollar puts in a higher low, we may see the greenback threaten the downward trend in the coming days, and the bullish sentiment surrounding the reserve currency should gather pace in the second-half of the year as the fundamental developments coming out of the world’s largest economy dampens the Fed’s scope to expand the balance sheet further. 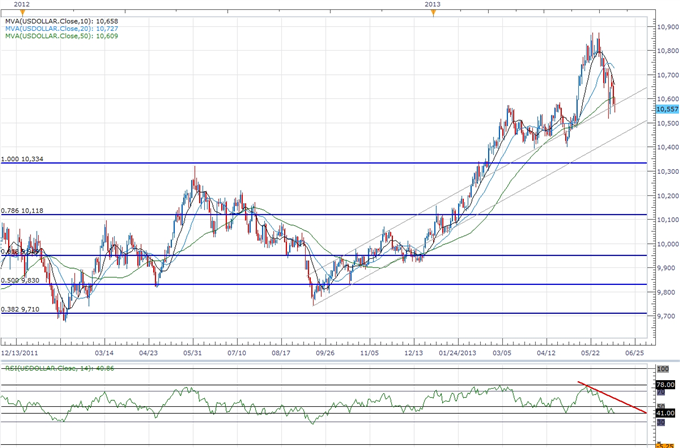 Indeed, U.S. Retail Sales are projected to increase another 0.4% in May, and the resilience in private sector consumption may encourage the FOMC to drop its dovish tone for monetary policy as the region gets on a more sustainable path. As a result, scaling back the asset-purchase program should be a growing theme in the second-half of the year, and we may see a growing number of central bank officials show a greater willingness to implement the exit strategy towards the end of 2013 as the recovery gradually gathers pace. In turn, a close above former trendline resistance could foreshadow a resumption of the upward trend carried over from the previous year, and the greenback looks poised to regain its footing in the days ahead as long as the relative strength index continues to find support around the 41 region.

The greenback weakened across the board, led by a 0.74 percent advance in the Australian dollar, but the higher-yielding currency may come under pressure during the next 24-hours of trading as the economy is expected to shed 10.0K jobs in May. At the same time, the unemployment rate is projected to advance to an annualized 5.6% despite a drop in the participation rate, and a dismal report may heighten speculation for another rate cut as the Reserve Bank of Australian (RBA) aims to encourage a stronger recovery. Indeed, Credit Suisse overnight index swaps continue to reflect bets for another 25bp rate cut over the next 12-months, and the AUDUSD should retain the downward trend dating back to 2011 as interest rate expectations remain tilted to the downside. Although the aussie-dollar looks poised for a rebound, the bullish divergence in the relative strength index may take some time to play out, and we may see the pair continue to consolidate below the 23.6 percent Fibonacci retracement from the 2011 high to low around 0.9780-90 as the fundamental outlook for the $1T economy remains weak.