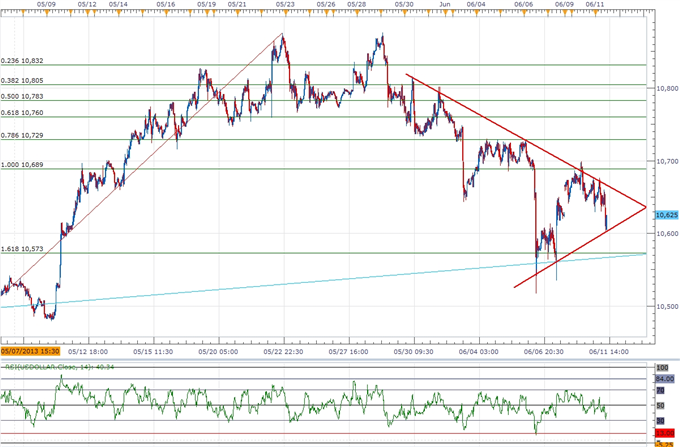 The Dow Jones-FXCM U.S. Dollar Index (Ticker: USDollar) is 0.28 percent lower from the open after moving 74 percent of its average true range, and the greenback may continue to give back the rebound from the previous week as the downward trend carried over from the previous month remains intact. At the same time, the index appears to be stuck in a consolidation formation, but we may see a bullish breakout as the greenback carves a higher low above the 10,500 handle In turn, we will keep a close eye on the 30-minute relative strength index over the next 24-hours of trading as the oscillator approaches oversold territory, and we may see the reserve currency resume the upward trend from earlier this year amid the shift in the policy outlook. 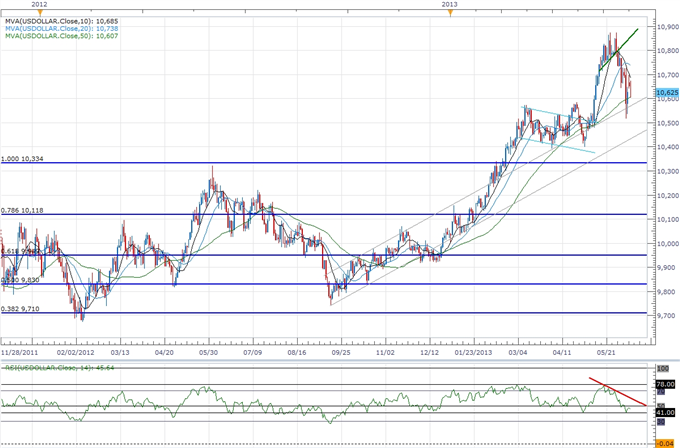 As the relative strength index on the daily chart continues to come off of support (41), the oscillator may threaten the bearish trend carried over from the previous month, and the greenback may regain its footing ahead of the next FOMC interest rate decision on June 19 as tapering the asset purchase program becomes a growing discussion at the central bank. Indeed, the USDOLLAR may continue to build a short-term base in June, and the greenback looks poised to make another run at the 10,900 handle as the FOMC faces limited scope to further embark on its easing cycle. As the economic recovery gradually gathers pace, we may see a growing number of Fed officials adopt a more hawkish tone for monetary policy, and the central bank may switch gears later this year as the world’s largest economy gets on a more sustainable path.

Three of the four components bounced back against the USD, led by a 1.78 percent rally in the Japanese Yen, while the Australian dollar bucked the trend as the higher-yielding currency shed 0.44 from the open. Indeed, the AUDUSD looks primed for a sharp rebound amid the bullish divergence in the relative strength index, but the fundamental developments coming out of the $1T economy may continue dampen the appeal of the aussie as the region faces a slowing recovery. As Australia is expected to shed 10.0K jobs in May, the persistent slack in the real economy may prompt the Reserve Bank of Australia (RBA) to implement another rate cut in the second-half of 2013, and we will continue to sell rallies in the AUDUSD as Governor Glenn Stevens keeps the door open for additional monetary support. In turn, we may see the 23.6 percent Fibonacci retracement from the 2011 high to low around 0.9780-90 may continue to provide interim resistance, and we should see the bearish trend dating back to 2011 produce further declines in the exchange rate as the interest rate outlook remains weak.