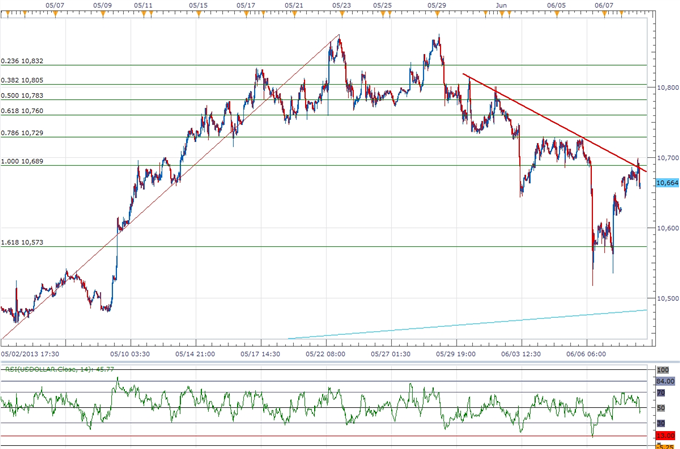 The Dow Jones-FXCM U.S. Dollar Index (Ticker: USDollar) is trading 0.33 percent higher from the open after moving 72 percent of its average true range, and the greenback may continue to gain ground throughout the North American trade as Standard & Poor’s raises its credit-rating outlook for the world’s largest economy to ‘stable’ from ‘negative.’ As the index continues to carve a higher low above the 10,500 handle, the dollar appears to be breaking out of the downward trend carried over from the end of May, but we will need to keep a close eye on the 30-minute relative strength index as it appears to be turning over ahead of overbought territory. Nevertheless, the ongoing improvements in the fundamental outlook should continue to increase the appeal of the USD, and the bullish sentiment surrounding the greenback should gather pace in the second-half of the year as tapering the asset-purchase program becomes a growing discussion at the Federal Reserve. 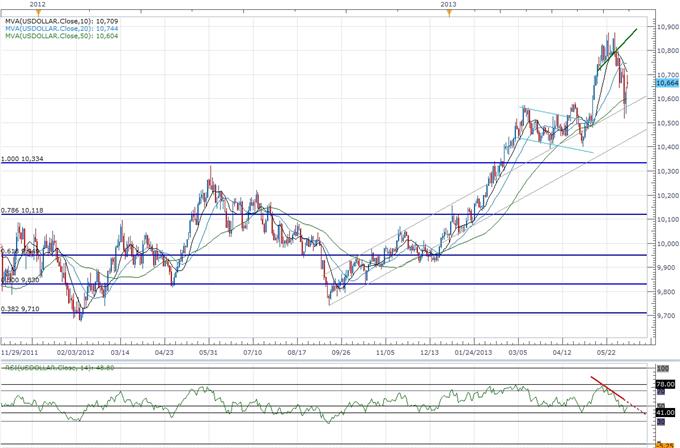 Although St. Louis Fed President James Bullard laid out arguments to both slow and extend the asset-purchase program, he remains optimistic that inflation will indeed pickup over the near to medium-term, and we should see the FOMC scale back on quantitative easing in the second-half of the year as the region gets on a more sustainable path. As the economic docket is expected to show U.S. Retail Sales rising another 0.4 percent in May, the resilience in private sector consumption should continue to limit the Fed’s scope to expand the balance sheet further, and the committee remains poised to switch gears later this year as the economic recovery gradually gathers pace. In turn, the USDOLLAR remains poised to make another run at the 10,900 region, especially as the relative strength index continues to find near-term support around the 41 figure.

The greenback strengthened against three of the four components, led by a 1.37 percent decline in the Japanese Yen, but the Bank of Japan (BoJ) interest rate decision on tap for later tonight may fail to produce further weakness in the low-yielding currency should Governor Haruhiko Kuroda strike a more neutral tone for monetary policy. Although there’s limited scope of seeing the BoJ implement more measures this time around, Mr. Kuroda may come under increased pressure to further embark on the easing cycle as Prime Minister Shinzo Abe’s government delays its new growth strategy, and the central bank head may take a more aggressive approach in the coming months as the region continues to face negative price growth. As a result, we anticipate to see further advances in the USDJPY on a longer-term scale, but the pair may chop sideways ahead of the next FOMC meeting on June 19 as market participants weigh the outlook for monetary policy.