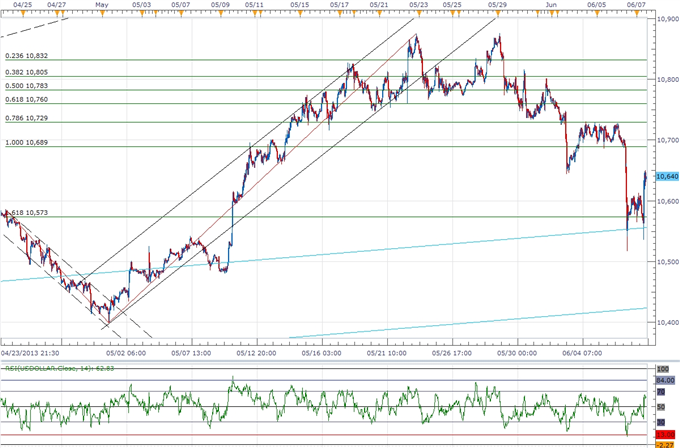 The Dow Jones-FXCM U.S. Dollar Index (Ticker: USDollar) is 0.55 percent higher from the open after the world’s largest economy added another 175K jobs in May, and the near-term correction in the greenback appears to be coming to an end as the index carves out a higher low above the 10,500 handle. As former trendline resistance appears to be providing support, we may see the dollar resume the upward trend from earlier this year, but the reserve currency looks poised to consolidate over the remainder of the North America session as the 30-minute relative strength index turns over ahead of overbought territory. Nevertheless, as the developments coming out of the U.S. raises the outlook for growth, the dollar may extend the rebound from 10,517, and the bullish sentiment may gather pace ahead of the next FOMC interest rate decision on June 19 as the central bank faces limited scope to expand the balance sheet further. 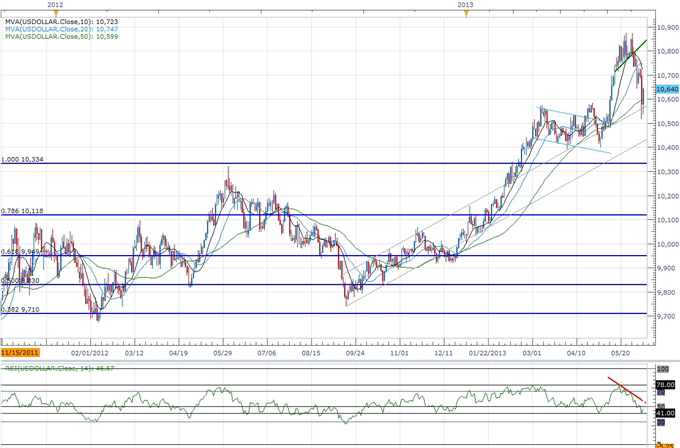 Although the unemployment rate advance to an annualized 7.6% in May, a deeper look at the report showed discouraged workers returning to the labor force, and the ongoing improvement in the labor market may prompt the FOMC to adopt a more neutral to hawkish tone for monetary policy as the economy gets on a more sustainable path. In turn, we may see a growing number of Fed officials scale back their willingness to keep the asset purchase program at $75/month, and the central bank may start to lay out a more detailed exit strategy in the second-half of the year. As the relative strength index continues to find support around the 41 figure, we may see the oscillator breakout of the downward trend in the coming days, and the USDOLLAR looks poised to make a more meaningful run at the 10,900 handle as market participants scale back bets for additional Fed support.

The greenback rallied against the board, led by a 1.33 percent decline in the Australian dollar, while the Japanese Yen shed 0.54 percent ahead of the Bank of Japan (BoJ) interest rate decision on tap for the following week. As Governor Haruhiko Kuroda monitors the impact of its easing cycle, we should see the BoJ stick to the sidelines, but the central bank may continue to carry outs its aggressive approach in achieve the 2 percent target for inflation in order to encourage a stronger recovery. However, as faster price growth saps purchasing power for Japanese households, Governor Kuroda may come under increased scrutiny, and we may see the BoJ refrain from broadening its easing cycle in the third-quarter as the world’s third-largest economy emerges from the recession. In turn, the shift in the policy outlook may trigger further downside pressures on the USDJPY, but we will continue to buy dips in the exchange rate on a longer-term scale as the FOMC turns increasingly upbeat towards the U.S. economy.