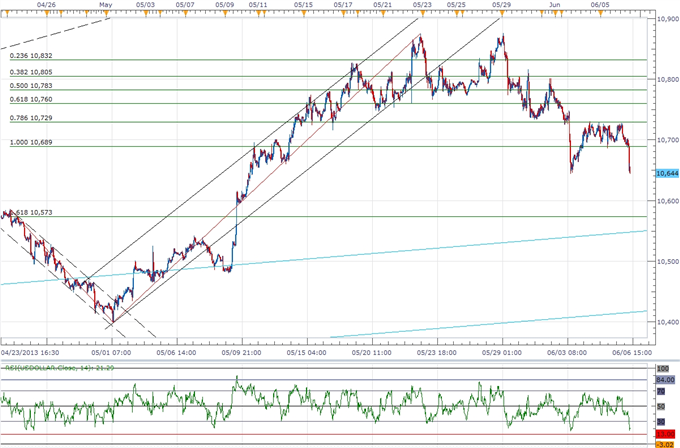 USD Searches for Support Ahead of NFPs- GBP to Outperform

The Dow Jones-FXCM U.S. Dollar Index (Ticker: USDollar) is trading 0.41 percent lower from the open after moving 101 percent of its average true range, and the greenback may continue to give back the advance from the previous month as market participants scale back on safe-haven flows. However, as the highly anticipated Non-Farm Payrolls report comes into focus, the dollar may consolidate going into the end of the week, and we may see the USDOLLAR track sideways over the next 24-hours of trading as the U.S. economy is expected to add another 165K jobs in May. In turn, we may see the greenback preserve the monthly low (10,643) and we should see a short-term rebound in the index once the 30-minute relative strength bounces back from oversold territory. 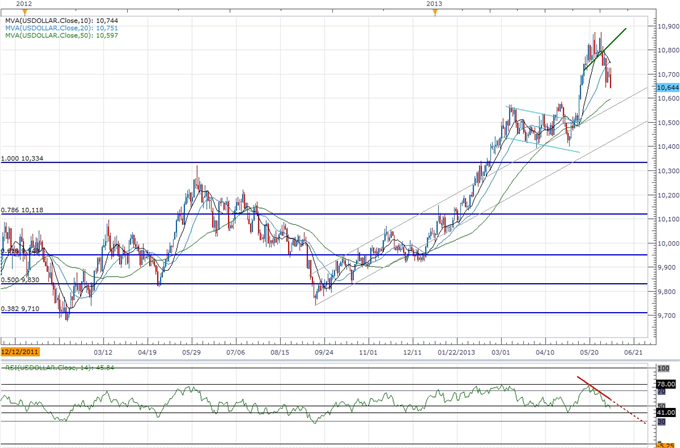 Beyond the headline reading for NFPs, we will be keeping a close eye on the unemployment print even as the gauge is expected to hold steady at an annualized 7.5 percent, and we may see unexpected uptick in the jobless rate as discouraged workers return to the labor force. In turn, we may get a not so clear cut reaction to a mixed batch of data, but we anticipate further USD strength in the second-half of the year as a growing number of Fed officials look to taper the asset purchase program in the coming months. However, we may see the greenback continue to work its way back towards former resistance around the 10,600 handle as it searches for support, and we may see the near-term consolidation continue to take shape ahead of the next FOMC interest rate decision on June 19 as the relative strength index maintains the downward trend carried over from the previous month.

The greenback weakened against three of the four components, led by a 0.90 percent rally in the British Pound, and the sterling may continue to recoup the losses from earlier this year as the Bank of England (BoE) carries a neutral policy stance into the second-half of the year. Indeed, it seems as though the BoE is slowly moving away from its easing cycle as the Monetary Policy Committee keeps the asset purchase program capped at GBP 375B, and we may see the central bank switch gears later this year as the region is expected to face above-target inflation over the policy horizon. In turn, the shift in the policy outlook should prop up the GBPUSD in the second-half of the year, and the pair may make another run at the 38.2 percent Fibonacci retracement from the 2009 low to high around 1.5680 as market participants scale back bets for more quantitative easing.