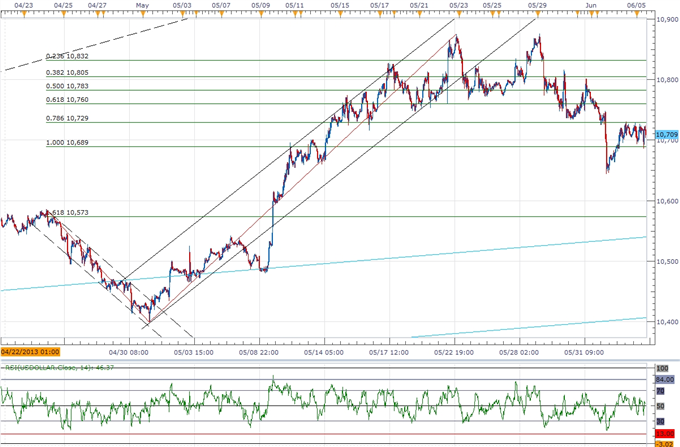 Although the Dow Jones-FXCM U.S. Dollar Index (Ticker: USDollar) is flat from the open, we’re seeing the reserve currency struggle to push back above the 78.6 percent Fibonacci expansion around 10,729, and the greenback may continue to consolidate ahead of the Fed’s Beige Book due out at 18:00 GMT as currency traders weigh the outlook for monetary policy. As the 135K rise in the ADP Employment report dampens the scope of seeing an upbeat Non-Farm Payrolls report on Friday, we may see the dollar struggle to hold its ground going into the end of the week, but the fresh batch of central bank rhetoric may increase the appeal of the USD should the central bank survey highlight an improved outlook for the world’s largest economy. In turn, we may see the greenback face range-bound prices ahead of NFPs, but the bullish sentiment surrounding the reserve currency should gather pace over the near to medium-term as the Fed looks to taper its asset purchase program. 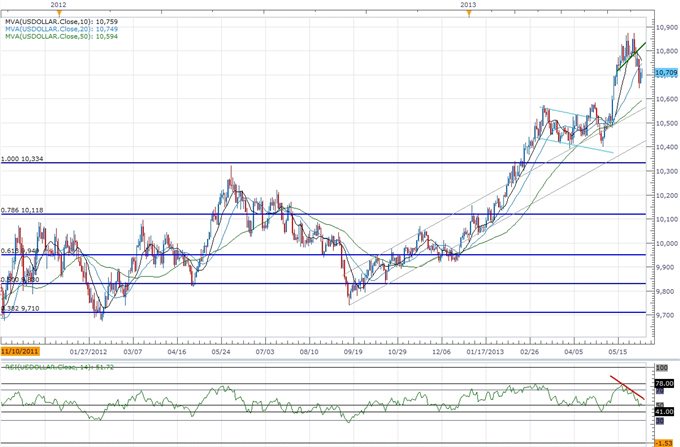 Kansas City Fed President Esther George – the lone dissenter on the FOMC – argued that scaling back the quantitative easing program is the ‘appropriate next step for monetary policy’ amid the ongoing improvement in the U.S. economy, and warned that ‘waiting too long to acknowledge the economy’s progress and prepare markets for more-normal policy settings carries no less risk than tightening too soon’ as the region gets on a more sustainable path. In turn, the dollar may continue to carve out a higher low ahead of the next FOMC interest rate decision on June 19, and we may see the central bank further discuss the exit strategy as a growing number of Fed officials scale back their willingness to implement more QE. Despite the bearish divergence in the relative strength index, the dollar appears to be facing a shallow correction amid the shift in the policy outlook, and the reserve currency remains poised to appreciate further in the second-half of the year as the fundamental outlook for the U.S. improves.

Three of the four components advanced against the greenback, led by a 0.75 percent advance in the Japanese Yen, and the near-term correction in the low-yielding currency may continue to shape over the remainder of the week as Prime Minister Shinzo Abe unveils the new government’s economic growth strategy, which could keep the Bank of Japan (BoJ) on the sidelines over the coming months. As Mr. Abe increases his effort to encourage a stronger recovery, BoJ may retain its current policy in the third-quarter, and we may see a more meaningful correction in the USDJPY as Governor Haruhiko Kuroda softens his dovish tone for monetary policy. As the USDJPY threatens the upward trending channel from earlier this year, a close below the 50-Day SMA (99.19) may generate a further decline in the exchange rate, but we will look to buy dips in the dollar-yen on a longer-term scale as the BoJ carries its easing cycle into the second-half of the year.