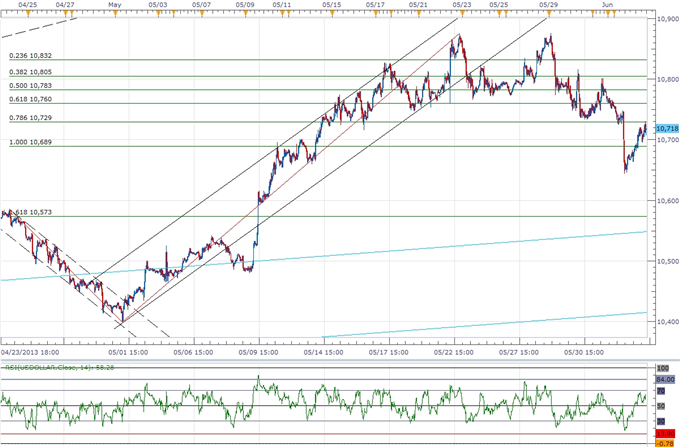 The Dow Jones-FXCM U.S. Dollar Index (Ticker: USDollar) is 0.45 percent higher from the open after moving 90 percent of its average true range, and the greenback may continue to track higher ahead of the Fed’s Beige Book as the central bank adopts an improved outlook for the world’s largest economy. In turn, we may see the rebound from 10,643 gather pace over the next 24-hours of trading, but we may see the reserve currency consolidate throughout the North American trade as the 78.6 percent Fibonacci expansion appears to be acting as interim resistance. As the index appears to be carving out a lower high, with the 30-minute relative strength index failing to mark a higher high, we may see the dollar may struggle to hold above the 10,700 handle, but the bullish momentum behind the reserve currency should gather pace in the second-half of the year as the central bank drops its dovish tone for monetary policy. 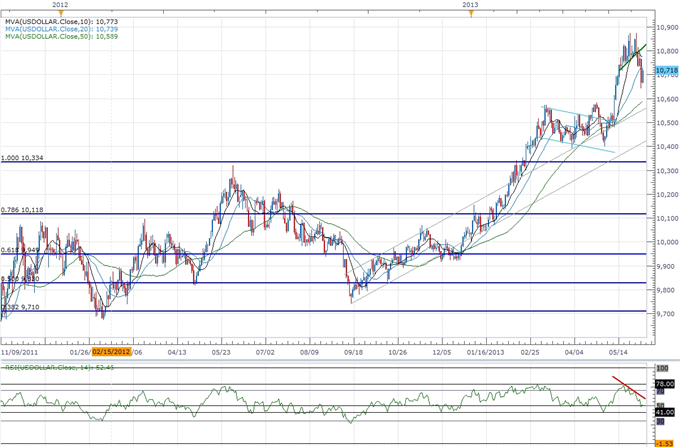 Although the ISM Non-Manufacturing index is expected to increase to 53.5 from 53.1 in April, the Fed’s Beige Book may play a greater role in driving the policy outlook as the district banks take note of a more robust recovery in the U.S. economy. Indeed, Atlanta Fed President Dennis Lockhart talked down speculation of expanding the asset-purchase program amid the improvements in the real economy, and saw scope to reduce quantitative easing in the summer as the region gets on a more sustainable path. As the near-term correction continues to take shape, we should see the dollar carve out a higher low in the days ahead, and we will keep a close eye on the relative strength index as it comes up approaches support (41).

The greenback rallied across the board, led by a 1.37 percent decline in the Australian dollar, and the higher-yielding currency may face additional headwinds over the near to medium-term as the Reserve Bank of Australia (RBA) looks to carry its easing cycle into the second-half of the year. Although the RBA kept the benchmark interest rate at 2.75 percent, Governor Glenn Stevens kept the door open to deliver another rate cut amid the ongoing slack in the real economy, and the central bank remains poised to push the cash rate to a fresh record-low in the coming months in order to stem the downside risks for growth and inflation. In turn, the bearish trend in the AUDUSD should take shape throughout 2013, and the pair could be carving out a lower high in June as it struggles to push back above the 23.6 percent Fibonacci retracement from the 2011 high to low around 0.9780-90.