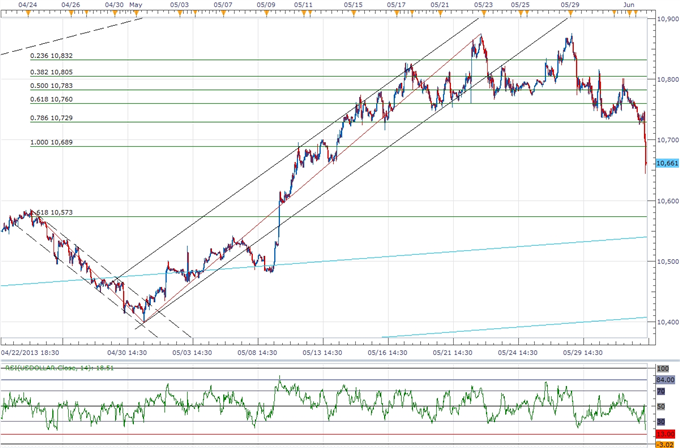 The Dow Jones-FXCM U.S. Dollar Index (Ticker: USDollar) is trading 1.01 percent lower from the open after the ISM Manufacturing survey marked the first contraction since November, and the near-term correction in the reserve currency may continue to take shape ahead of the next FOMC interest rate decision on June 19 as market participants weigh the outlook for monetary policy. As the USDOLLAR struggles to hold above the 100 percent Fibonacci expansion around 10,689, the dollar may move back towards the 1.618 Fib around 10,573, but we may see a short-term rebound over the next 24-hours of trading as the 30-minute relative strength index dips into oversold territory. Nevertheless, we will continue to buy dips in the USD on a longer-term scale as we see a growing number of Fed officials scale back their willingness to expand the balance sheet further, and the bullish sentiment surrounding the reserve currency should gather pace in the second-half of the year amid the shift in the policy outlook. 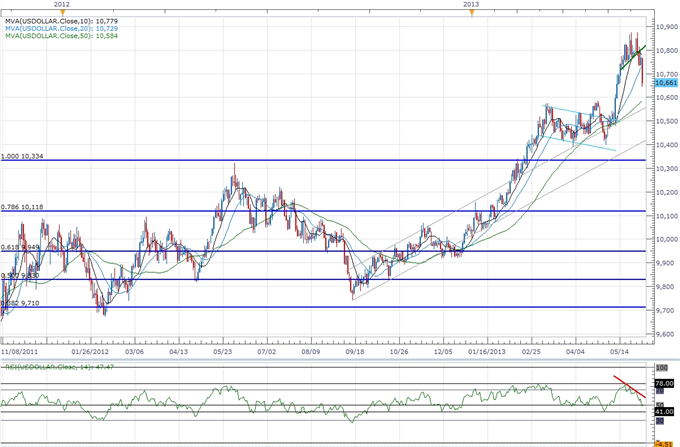 As the bearish divergence in the relatives strength index continues to pan out, we may see a move back towards former resistance around the 10,600 handle, but we will be keeping a close eye on the relative strength index as it comes up against support at the 41 figure. In turn, we are still looking for a higher low in the USDOLLAR, and the bullish momentum should continue to gather pace in the months ahead as San Francisco Fed President John Williamssees the FOMC scaling back on quantitative easing as ‘early as this summer,’ and we may see a growing number of central bank officials adopt a neutral to hawkish tone for monetary policy as the U.S. economy gets on a more sustainable path. However, as the ISM’s employment component narrows to 50.1 from 50.2 in April, the softer rate of growth may dampen the outlook for the highly anticipated Non-Farm Payrolls report due out on Friday, and the dollar may consolidate further in the days ahead as it searches for support.

The greenback weakened across the board, led by a 1.91 percent advance in the Australia dollar, and the AUDUSD may continue to retrace the decline from the previous month should the Reserve Bank of Australia (RBA) talk down bets for another rate cut. After pushing the benchmark interest rate to a fresh record-low of 2.75%, Governor Glenn Stevens is widely expected to sit on the sidelines as the monetary easing continues to feed into the real economy, and the policy statement accompanying the rate decision may produce another short-term bounce in the exchange rate should the RBA raise its fundamental outlook for the region. However. we may see the central bank head keep the door open for more easing in order to encourage a stronger recovery, and we will maintain a bearish outlook for the AUDUSD as the downward trend dating back to 2011 continues to take shape.