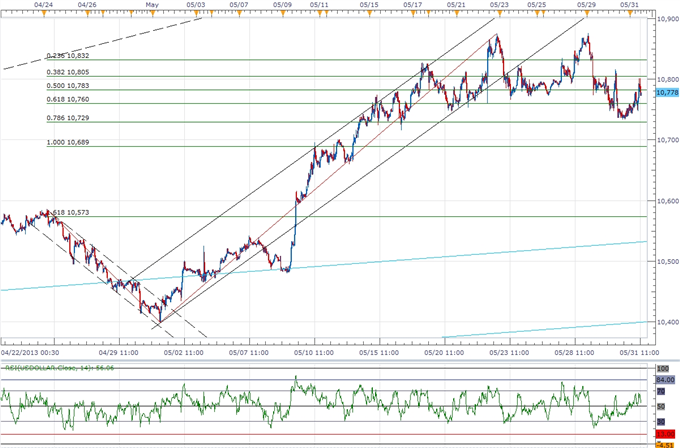 Despite the slowdown in Personal Income/Spending, the Dow Jones-FXCM U.S. Dollar Index (Ticker: USDollar) is trading 0.36 percent higher on the day as the Chicago Purchasing Manager index advanced to 58.7 in May amid forecasts for a 50.0 print, but the short-term rebound appears to be tapering off as the greenback struggles to push back above the 38.2 percent Fibonacci expansion around 10,805. As the 30-minute relative strength index comes up against overbought territory, we may see the dollar consolidate ahead of June, and end-of-month flows may produce choppy price action throughout the remainder of the day as market participation thins ahead of the weekend. In turn, we may see the USDOLLAR fall back towards the 78.6 retracement around 10,729, but the Fed’s Beige Book on tap for the following week may increase the appeal of the greenback should the district banks highlight an improved outlook for growth. 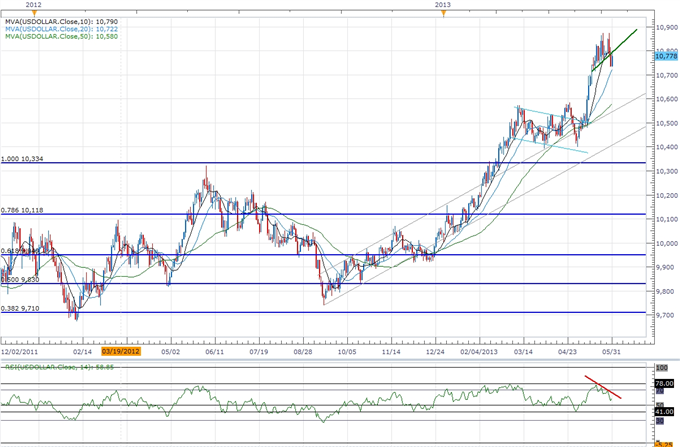 Indeed, the daily chart continues to point to larger decline as the bearish divergence in the relative strength index continues to pan out, and the dollar may track lower in the days ahead as former trendline support appears to be acting as new resistance. As a result, the USDOLLAR may continue to search for new support in the week ahead, but we may see a shallow correction in the reserve currency as tapering the asset purchase program becomes a growing discussion at the Federal Reserve. Indeed, the bullish sentiment surrounding the USD should get carried into the second-half of the year amid the shift in the policy outlook, and we will look to buy dips in the greenback as the fundamental outlook behind the reserve currency improves.

The greenback rallied across the board, led by a 0.63 percent decline in the Australian dollar, and the higher-yielding currency may face additional headwinds in the week ahead should the Reserve Bank of Australia (RBA) see scope to lower the benchmark interest rate further. After delivering a 25bp rate earlier this month, the RBA is widely expected to keep the cash rate at 2.75 percent during the June 4 meeting, but Governor Glenn Stevens may see scope to provide additional monetary support in an effort to encourage a stronger recovery. As the relative strength index on the AUDUSD struggles to push back above 30, we may see a further weakness in the exchange rate before a near-term correction takes shape. Nevertheless, as interest rate expectations remain tilted to the downside, we will look to sell rallies in the aussie-dollar on a longer-term scale, and will retain a bearish outlook in the second-half of the year as it maintains the downward trend dating back to 2011.