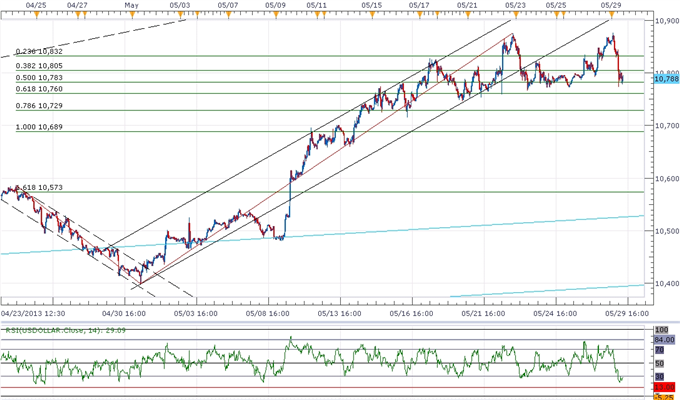 Although the Dow Jones-FXCM U.S. Dollar Index (Ticker: USDollar) is 0.49 percent lower from the open, we’re seeing the greenback hold above the 61.8 percent Fibonacci expansion around 10,760, and the reserve currency may regain its footing over the next 24-hours of trading as the 30-minute relative strength index bounces back from a low of 20. In turn, we may see the greenback track sideways over the remainder of the week, but end-of-month flows may spark further weakness in the USD as there appears to be a wave of profit-taking ahead of June. Nevertheless, as tapering the asset purchase program becomes a growing discussion at the Federal Reserve, we should see the bullish sentiment surrounding the reserve currency get carried into the second-half of the year, and the central bank may look to switch gears later this year as the world’s largest economy gets on a more sustainable path. 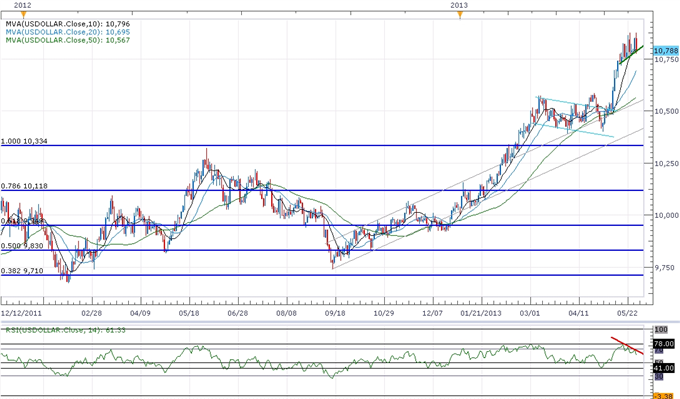 Despite the constructive view in the 30-minute chart of the USDOLLAR, the daily view appears to be more telling of a near-term correction amid the bearish divergence in the relative strength index. With Boston Fed President Eric Rosengren scheduled to speak at 17:00 GMT, the 2013 FOMC voting member may fuel a further selloff in the greenback should the central bank official show a greater willingness to retain the highly accommodative policy throughout the rest of the year. Nevertheless, the resilience in private sector consumption along with the budding recovery in the housing market should limit the Fed’s scope to expand the balance sheet further, and the shift in the policy outlook should continue to produce fresh highs in the dollar as market participants scale back bets for more monetary support. In turn, we should see a near-term correction in the USD produce a higher low in the index, and we may see a move back towards former resistance around 10,600 as the dollar searches for support.

The greenback weakened across the board, led by a 1.47 percent advance in the Japanese Yen, while the Australian dollar added 0.11 percent after tagging a fresh monthly low of 0.9528. As the AUDUSD breaks below the June low (0.9580), we may see the a short-term correction take place ahead of the Reserve Bank of Australia (RBA) interest rate decision on tap for next week, but we will need to keep a close eye on the relative strength index as the oscillator continues to hold it oversold territory. As the RBA is widely expected to keep the benchmark interest rate at 2.75%, the neutral policy stance may help to encourage a more meaningful rebound, but we will look to sell rallies in the higher-yielding currency as the AUDUSD continues to carve a series of lower highs paired with lower lows.